The Unforgivable (Review) – Can You Ever Forgive Sandra Bullock? 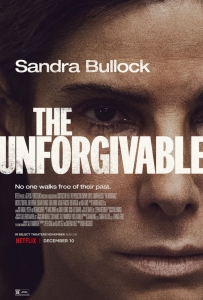 BASICALLY…: After being released from prison for a violent crime, a woman (Bullock) finds it difficult to re-enter society…

Like Halle Berry before her with Bruised, Sandra Bullock’s current play for awards consideration comes with a gritty, down-to-earth Netflix drama that sees the Oscar-winning actress shun decency and make-up for a hard-boiled turn that’s admirable in its commitment, but not much else. Next to Bruised, The Unforgivable is perhaps a slightly more ambitious movie, but it’s still not likely to bring its lead actress, or anything else it has to offer, into the more serious accolades conversation any time soon.

Based on the British TV miniseries Unforgiven – renamed here because, well, the Clint Eastwood movie took that name already – The Unforgivable stars Bullock as Ruth Slater, a woman who has just been released from a 20-year prison sentence after she killed a sheriff in cold blood. Labelled a cop-killer everywhere she goes, Ruth tries to pick her life back up with two back-to-back jobs at a fish factory and as a carpenter, all while trying to locate her younger sister Katie (Aisling Franciosi), who has since been living with a foster family and has no apparent memories of her older sister except for bouts of suppressed trauma. However, when the two vengeful sons of the murdered sheriff, Keith (Tom Guiry) and Steve (Will Pullen), discover that their father’s murderer is roaming free, they ignite a path for Ruth that can only lead to more brutality.

The fact that The Unforgivable is based on a miniseries makes a whole lot of sense, because the movie feels like it’s been comprised of several different movie plots at once. You have the story of a woman who did a pretty horrible thing in the past and is now trying to atone for their mistakes, but also one about a pair of brothers whose furious desire for vengeance consumes them, a foster couple trying to stop past figures from interfering with their adoptive daughter’s life, and that isn’t even beginning to mention whatever kind of movie that both Vincent D’Onofrio and Viola Davis – as a married couple whom Bullock’s Ruth comes into contact with when they move into her old house – are currently in. I don’t know how the miniseries ties all these plots together (unless some of them were made up for this film), but here it’s very convoluted and messy without much focus on one particular angle, instead firing on all cylinders but still missing the ultimate bullseye.

It’s an unevenly paced movie as a result, with director Nora Fingscheidt – of the hit German drama System Crasher, with The Unforgivable being her English-language debut – struggling to find a suitable hook for the audience to latch onto, as well as flimsy reasons for why we should be sympathetic towards the main character who doesn’t make much of an effort to engage with the audience. Bullock is good in the movie – in fact, the acting overall is solid – but her character isn’t interesting enough to justify basing a whole movie around her, especially when there are much more interesting arcs going on with the vengeful brothers, a friendly co-worker played by the ever-charming Jon Bernthal, or even Aisling Franciosi who has almost nothing to do in the movie despite being a prominent character in the story. Most of the time, you’re not really invested in the story because it lacks a firm storytelling grip which is eased by some eye-rolling twists later on, and characters doing things which feel completely random and even out of character, all so they can be a part of the contrived climax in some capacity.

Going back to this movie’s roots in episodic television, there are times in this movie when you feel like you’re watching a TV movie on the big screen. The editing, for instance, is choppy and single-minded as though you’re watching a “previously on…” summary of the last episode’s events, while the musical score – of which Hans Zimmer is credited as co-composer – swells up so much at the end of certain important scenes like it’s the stinger for the current episode; you’re half-expecting it to suddenly cut to black and then for “executive produced by Shonda Rhimes” to appear on the screen. Again, I have no idea if the miniseries is like this either, but I’m willing to be that even the version of this story that was originally made for television is slightly less subtle or overt than the framework of this film adaptation.

Like with Bruised, you can see the kind of awards-friendly goals that the filmmakers are perhaps reaching towards, such as a possible Lead Actress nod for Bullock (who’s also a producer on the film), although in a slightly less cynical fashion. However, the messiness of the film itself is likely to put a damper on those plans, despite the actress once again doing her best in material that’s not quite up to her standards.

The Unforgivable is a disappointingly messy adaptation of the British TV miniseries, which struggles to contain multiple storylines without an intriguing hook or an interesting enough main character, despite the noble efforts of lead actress Sandra Bullock.

The Unforgivable will be available on Netflix from Friday 10th December 2021.