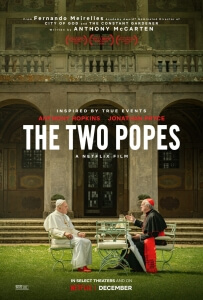 BASICALLY…: Popes Benedict (Hopkins) and Francis (Pryce) struggle to find common ground if they are to forge a new path for the Catholic Church…

This review is of the cut shown at the BFI London Film Festival in October 2019 – it is currently scheduled to debut on Netflix on December 20th 2019.

How on Earth do you make a story that’s nothing more than two elderly men – both of whom happen to be, at one point in their lives, the elected leader of the Catholic Church – sitting and wandering while having a chat feel so cinematic? Somehow, director Fernando Meirelles has found a way to make that not seem like the dullest film on Earth, as it shows an interesting side to two very different men that’s boosted by a strong sense of style, as well as two stellar performances by acting veterans at the top of their game.

We begin in 2005, when Argentinian Cardinal Jorge Mario Bergoglio (Jonathan Pryce) – the future Pope Francis – is summoned to Vatican City after Pope John Paul II passes away. He and many other Cardinals are expected to vote on who shall become the next Pontiff, which ends up being German outsider Joseph Aloisius Ratzinger (Anthony Hopkins), re-named Pope Benedict XVI. Flash forward to 2012, when Bergoglio flies from Buenos Aires to the Pope’s summer retreat in Rome to offer his resignation, and from there the movie practically becomes a two-hander as both Popes – present and future – trade experiences and discuss their opposing views of the world with each other.

Meirelles here works from a script by BAFTA-winning writer Anthony McCarten, who himself based the screenplay on his own stageplay entitled The Pope; there is evidence throughout that this script began life as a play, given how most of it is a duologue between both the lead characters, but the filmmaker pushes limitations with a strong eye for stylish visuals, subtle sound design and neatly spliced editing that makes the majority of their talking scenes at times feel like action sequences. McCarten’s script is filled with a surprising amount of wit and sophistication, which keeps things entertaining even when the conversation topic is less than enthralling – I’m hard-pressed to think of another time when two old men discussing the beliefs of the Catholic Church has been so riveting – while Meirelles channels his inner Danny Boyle for a film that exhibits a great sense of style, but nothing that’s too in-your-face and doesn’t get in the way of the meat within the story.

Then, of course, there’s the two Popes themselves. It should be no surprise that both Jonathan Pryce and Anthony Hopkins are wonderful here, but it might be a shock to say that they are able to find the humility and grace (no pun intended) in two of the most fascinating figures in modern religious history. Right away, it’s clear that both are completely different to each other; Jorge is forward-thinking, able to win over a crowd, and has a true burning desire to bring some decency back to a more conservative Catholic Church; meanwhile, Pope Benedict is infinitely more reserved, dogged by scandals from his childhood as a member of the Hitler Youth to the increasing accusations that he helped cover up the numerous sexual abuse cases within his church, and not as willing to engage with others (he eats dinner in his own quarters with the television on, rather than dine with Jorge). Both actors nail the respective enthusiasm and weary sides to their characters, but the performances are not one-dimensional, with Pryce hiding behind his optimism a deep shame for his past, and Hopkins showing that behind this stubborn old pope is a man of wisdom well beyond even his advanced years. Together, they share a fun chemistry as they constantly try to find a balance between their differing ideologies, while also bonding over the Beatles and even telling each other some jokes, which paints their otherwise holy personas in a completely different light.

If the film had any pitfalls, it would be that sometimes it relies a little too heavily on flashbacks, particularly to when a younger Jorge (played by Argentinian actor Juan Minujín) first turns to life in the church and later when he becomes involved with the right-wing Argentinian dictatorship of 1976. Whenever it does cut back to this timeline, it’s as though the movie stops dead so it can continue being an extended flashback, when really you’d rather just be seeing what Popes Benedict and Francis are up to. A lot of it feels unnecessary, and could have easily been summed up in a small line or two od dialogue rather than lending a lot of focus to it in the second half of the movie. It’s understandable why it’s there, because having the whole movie just be these two talking to each other would get very tiresome after a while, but there could have easily been another way around it so that it didn’t bring everything else to a grinding halt.

But seriously, think about it for a second; the fact that a criticism about this movie is that there’s not enough of two elderly gentlemen sitting around and having a chat, is simply astounding. Meirelles and McCarten have achieved the impossible and made something that by no rights should feel cinematic feel just as grand and adventurous as some of the more epic films playing at this festival, and along with two strong performances by a couple of very fine actors they have made the most enthrallingly talkative religious movie since Spotlight.

The Two Popes achieves a near-impossible task and makes a story about two elderly gentlemen talking to each other, both played strongly by Jonathan Pryce and Anthony Hopkins, seem extremely cinematic thanks to a witty script and a sharp style from writer Anthony McCarten and director Fernando Meirelles respectively.

Want to decide what the movie’s like for yourself?
Check out The Two Popes showtimes in London
via