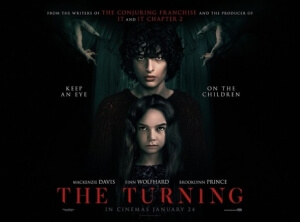 BASICALLY…: A young governess (Davis) discovers that the young children she has been entrusted with might not be as easy to care for as she may have hoped…

Henry James’ 1898 ghost story The Turn of the Screw has been adapted countless times over the years, including films like Jack Clayton’s The Innocents and it was even turned into an opera by legendary composer Benjamin Britton. However, The Turning is an adaptation like no other, in the sense that it will leave you so bewildered, but also so bored, by its failed attempts at being scary that suddenly, reading a 122-year-old novella doesn’t seem like such a bad idea in comparison.

This version, directed by Floria Sigismondi in her first feature film credit in 10 years, takes place in the 1990s – no real reason for it to be, incidentally, because other than news reports citing the death of Kurt Cobain there is nothing about the time period that plays into anything – and sees a young woman named Kate (Mackenzie Davis) accept a governess role for a young girl named Flora (Brooklynn Prince), who lives on an isolated estate with only the caretaker Mrs. Grose (Barbara Marten) for company. At first, Kate gets on well with the sweet and energetic Flora, but things become more complicated when Flora’s older brother Miles (Finn Wolfhard) abruptly returns from boarding school, having been expelled for assaulting another student. As if Miles’ creepy serial killer vibes weren’t enough, Kate also has to contend with a possible supernatural force that is lurking somewhere in the background.

Except, for most of the film, there isn’t. While there is certainly something other-worldly going on, it’s really not until a lot later in the film (aside from a brief prologue hinting at it) that it really starts to become more of a ghost story, and even when it does it’s no more interesting than anything else that’s happened by that point. It’s a movie comprised of so many unoriginal elements from other source materials than just the original Henry James story, that there is no point conjuring up any interest in any of it because you’ve seen it all before, and always done so much better than this. You know exactly what kind of person Finn Wolfhard is playing in this movie, because not only is he giving off so many red flags with his increasingly creepy behaviour but his amusingly over-the-top performance is reminiscent of every other sinister movie young’un to a point where you can predict many of his actions before the film even hints at them. You also don’t feel any sympathy for Mackenzie Davis’ character, because she makes numerous dumb decisions such as deciding to stay with this family even though Wolfhard is clearly on to her in more than one sense of the phrase, because if she did straight up leave then there wouldn’t be a movie. The film’s one saving grace is Brooklynn Prince, who brings as much charm and charisma to the relatively thin character she’s been given as she did with her breakout performance in The Florida Project, but sadly she is not enough to save your impending boredom as scene after scene drags on and on and on with zero scare factor or any interest in the plot or characters whatsoever.

However, the film does manage to pick up in its final few minutes – but not in a good way. Without getting into too many details, this movie has the kind of ending where it doesn’t even feel like an ending, and rather like an entire reel containing the third act of the film suddenly vanished. It is not only abrupt, but also highly confusing; it ends on a note that will have you scratching your head wondering what in the hell you had just witnessed, because none of the details that you have been given make any kind of logical sense, and the fact that it just leaves you with far more questions than answers makes it incredibly frustrating. It is reminiscent of the infamous ending to The Devil Inside, which notoriously also ended extremely abruptly, to a point where there were several reports of audiences booing the film when it suddenly cut to black and credits started rolling. At the screening I was at, I wouldn’t say there was booing (though I would completely understand there being some at other screenings for this movie) but there was definitely confusion amongst several other audience members, who all just stood up and left quietly while talking quietly to themselves, as though they too were utterly perplexed by the odd decision to cut the film short there and then. Keep in mind, this was an evening screening on its opening weekend, and the crowd was made up of young teenagers who this film was so blatantly made for, and even those rambunctious types barely made any noise during that ending. Then again, they didn’t make a whole lot of noise during the rest of the film either, which just goes to show that not even the target demographic for this January horror film were responding accordingly to this film, and especially towards its baffling conclusion.

In terms of stock January horror releases, while it’s definitely not good I do not think it’s worth all the hate it’s been getting, whether it’s the dire critical score on Rotten Tomatoes or the F rating on Cinemascore (usually the kiss of death with audiences). Honestly, the movie is far too dull and boring to even inspire any kind of emotion towards it, and I think for a film like this to be truly worth the hate it has to at least be interestingly bad – but aside from that wildly miscalculated ending, there is hardly anything about The Turning that really warrants that level of hatred. You’re going to go into it mildly curious because of the critical drubbing, but you’re going to come out of it barely remembering a thing about it, other than how abruptly it ends. It’s really not worth your time regardless, but for something already built up to be the next big awful January horror movie one can’t help but feel even more cheated.

The Turning is a dreadfully dull and boring adaptation of the classic Henry James story that has zero scares, no interesting plots or characters, and is instead a lifeless rehashing of several other, and much better, ghost stories which all concludes in the most spectacularly abrupt ending to a horror movie since The Devil Inside.

Want to decide what the movie’s like for yourself?
Check out The Turning showtimes in London
via