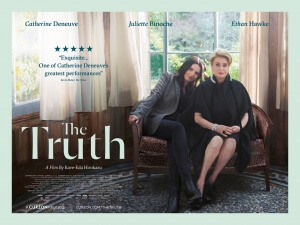 BASICALLY…: An aging movie star (Denevue) clashes with her adult daughter (Binoche) when her revealing memoir is about to be published…

Two years ago, Japanese filmmaker Hirokazu Kore-eda was awarded the Palme D’Or at Cannes for his then-latest film Shoplifters, an accolade which immediately puts whatever he follows it up with next on a pretty high pedestal. His choice to go with a film outside of his native Japan for the first time seems like a rational decision, considering how Shoplifters brought him a bit more attention from international audiences, but most people probably didn’t expect for him to take the action to France, a country renowned for its breath-taking culture that’s also radically different from his traditional Japanese environment.

Did the gamble pay off? Well, for admirers of Kore-eda’s previous work, it probably won’t match their expectations, but for everyone else The Truth is a sombre, well-made chamber-piece that’s decent food for the brain.

The film stars Catherine Denevue as Fabienne, an aging French movie star regarded as one of the country’s finest actresses. In reality, though, she’s cold, self-centred, and completely incapable of considering anyone else’s feelings but her own. Things kick off as Fabienne is about to release her tell-all memoir, for which her adult daughter, New York-based screenwriter Lumir (Juliette Binoche), along with her American actor husband Hank (Ethan Hawke) and their young daughter Charlotte (Clémentine Grenier), have arrived in France for to celebrate; however, Lumir finds several parts of the book, especially when describing how she was a good mother, to be a complete fabrication, causing the two to continuously butt heads. On top of that, Fabienne is also struggling on the set of her latest film, a sci-fi tale where she plays the daughter of a woman who never ages – played by a rising actress (Manon Clavel) that Fabienne seems jealous towards, not just because she seems to be a stronger actress than she is, but she also reminds her of a late rival who acted more like a mother to Lumir than she ever did.

Apparently, the origin of this movie comes from an unproduced play that Kore-eda developed back in the early 2000s, which is interesting because you can definitely feel the theatrical vibe in the dialogue, the direction, and even the performances. It’s modified enough that it feels like more of a film than it does a play, but from the long drawn-out dialogue scenes to visual cues that seem to be designed to transition into an intermission it has an unmistakable connection to the stage that’s hard to shake off. Kore-eda, however, uses the language of filmmaking to his advantage while telling his story on the screen, such as lengthy shots and carefully distanced close-ups to hone in on a particular exchange and the numerous emotions going through their heads in the moment, and he does so in a way that’s both graceful and, in their own way, mesmerising. His dialogue, too, contains several instances of light humour sprinkled throughout (so light, in fact, that the PG rating is almost a little too appropriate), most of which comes from Denevue’s Fabienne as she blazes her way through nearly everyone around her with venomous quips that burn as well as shock.

Denevue, incidentally, is perfectly cast as the central fading diva, and the legendary French actress revels in scenes where her character makes as many people’s lives a living hell as she possibly can, all to hide a glaring insecurity about her acting abilities in the twilight of her career. By having her confront the mistakes of her past head-on, both at home with her disapproving daughter – a great Juliette Binoche – and at work with an actress who reminds her far too much of her biggest adversary, Denevue’s character is forced to address both glaring problems without letting her ego get too much in the way, a tricky tightrope that the actress walks but just about pulls off, even when there are times when she is so egotistical that you start to really not care about what happens to this person. It’s a strong lead performance that pays meta homage to the actress’s successes while also embracing all of the new areas she can take her acting as she, like her character, reaches uncharted territory in her career.

The film certainly has a number of strengths to it, although it admittedly does take some time for those elements to really start coming to life. It is a slow-burn drama, which can mean that multiple scenes go by without much going on, something that can start to test the patience after a short while, and I’ll admit that about halfway into the movie my mind was starting to wander a little bit. It did pick up a little more around the second half, which I am grateful for because that was when the film really started to finally find its groove after a rather dour first-half, largely made up of people being petty and mean towards each other which could get frustrating after a while.

Though it’s not the type of film that will necessarily attract a wider audience, The Truth serves as decent drama for its particular audience, even if (again) it’s probably nowhere near as provocative or even thrilling as some of the filmmaker’s previous work. However, it’s not one I’ll necessarily be thinking about again – and that’s the truth.

The Truth is a sombre but decent chamber-piece drama that takes a little while to find its footing, something that isn’t helped by a slow-burn pace, but is made up for with swift filmmaking, a light script, and a ferocious lead performance by Catherine Denevue who gives her central performance all that she’s got.

Want to decide what the movie’s like for yourself?

Check out The Truth on Curzon Home Cinema – do your part to support cinema during the coronavirus (COVID-19) pandemic.