The Toll (Review) – Yet Another Tarantino-Baiting UK Western 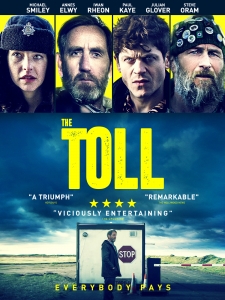 BASICALLY…: A toll booth operator (Smiley) living in South West Wales learns that his shady past is catching up to him…

It feels like we get a movie like The Toll at least once every year; a quirky, darkly comic crime thriller set in a rural part of the UK/Ireland, and which contains writing and filmmaking you would normally expect to find in either a Quentin Tarantino movie or a Coen Brothers outing. The Toll is simply the latest in a pattern of films like Pixie, Calm with Horses and Calvary, but it’s not as if the pattern is wholly without merit, and like a number of similar movies before it, this one has some entertainment value in its messy and ambitiously unambitious storytelling.

Taking place in the quiet Welsh county of Pembrokeshire, the film starts as a nameless toll booth operator (Michael Smiley) offers to tell local policewoman Catrin (Annes Elwy) a story that ultimately leads to the apparent carnage just outside. We learn – through increasingly fragmented vignettes – that the operator has been working his quiet and uneventful job for almost thirty years, but a chance encounter with old associate Elton (Gary Beadle) suddenly draws the attention of some other shady figures from his past. As the operator prepares for an eventual showdown, he also has to deal with interludes concerning some of the eccentric locals, including sadistic biker Dom (Iwan Rheon), lovestruck paramedic Cliff (Paul Kaye), an Elvis-impersonating gangster (Evelyn Mok), and three triplets who are going on a minor crime spree (all played by Gwyneth Keyworth). Meanwhile, Catrin spends her day trying to keep the peace in the small town, while dealing with a close tragedy that took place a year prior.

The film, which comes from director Ryan Andrew Hooper and writer Matt Redd, plays like a drier and slightly less ambitious McDonagh script (either by Martin or John Michael), where the off-kilter humour is certainly present but the plot in which it’s happening plays out as expected, with few true surprises that either McDonagh is much better at delivering. There are some funny gags about Welsh intolerance towards English visitors (the county sign is desecrated with graffiti stating that it’s a place “where English people come to die”), and there are a few neatly worked-in movie references which do get a good reaction, including a Star Wars sight gag that reaches Father Ted levels of absurdity. However, as amusing as it can be, there is a looseness to the plot which makes it surprisingly difficult to pinpoint; it is intentional, and even the film appears to be aware of its scattershot narrative (the main character admits that the chronology of his story is rather confusing), but it doesn’t make it any less frustrating when you’re trying to piece together exactly how certain characters know one another, what our nameless protagonist has been doing this whole time, and why it’s taking this policewoman way longer than it should to piece together the puzzle. There’s rarely a moment when you feel as though all of these loose threads are leading to something, because there’s no clear throughway established from the offset.

However, the cast of the film are certainly having fun playing some very larger-than-life types, which goes a long way in making the material watchable, no matter how scatter-brained it can be. Michael Smiley is good as always in a rare lead role for the character actor, while Game of Thrones alumni Iwan Rheon and Paul Kaye are gifted with colourful roles that make for some of the film’s livelier scenes (though in the former’s case, it does occasionally feel like he’s revisiting Ramsay Bolton in some of his deliveries and sadistic expressions). There’s even a fun trio role for actress Gwyneth Keyworth who plays three very different, but equally clueless, sisters trying to steal what little they can. The standout, though, is Annes Elwy who brings warmth and genuine sweetness to her part, the one ray of sunshine in an otherwise dire and cloudy environment.

As a film, it’s perfectly fine; it’s by no means one of the strongest examples of Tarantino-baiting quirky crime comedies, but The Toll is a good enough excuse to watch some fun characters be played by some game and immersive actors. You might want to start making a mind-map of plot points, though, because you’ll otherwise get lost within its messy storytelling.

The Toll is an amusingly quirky crime comedy with colourful characters and fun performances, but its scattershot non-linear storytelling often confuses more than it entertains, while it lacks a sense of ambition that similar films managed to achieve.

The Toll will be released in UK cinemas on Friday 27th August 2021. It will also be available to rent/buy on digital platforms, including Amazon Prime Video.