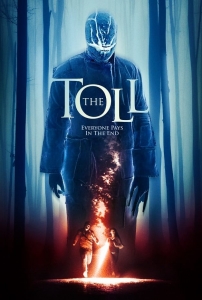 BASICALLY…: A rideshare driver (Topplin) and his passenger (Hayes) become lost and face off against a terrifying entity…

With his first feature The Toll, writer-director Michael Nader shows that he clearly knows the right ingredients for an effective horror film. He manages to get a decent amount right where a lot of other debut horror filmmakers go wrong, including less of a reliance on cheap jump-scares and more on atmosphere and suspense.

However, for as many things as he does get right, there are just as many which he doesn’t quite succeed at. Of course, with any filmmaker just starting out with their first feature, they’re almost always bound to screw up at least one thing, and then learn from those mistakes for future projects. The same is true for Nader here, but seeing how there is actually a fair number of things that do work about The Toll, it becomes even more frustrating when you factor in all the things that don’t.

The film starts as rideshare driver Spencer (Max Topplin) picks up Cami (Jordan Hayes) from the airport during the early hours of the morning. Cami has just had a rough flight, and wants nothing more than to rest while her driver takes her to her father’s house in the middle of nowhere. However, Spencer attempts to engage in awkward conversation with his passenger, which leaves Cami all the more on edge as she becomes freaked out that her driver might be a psycho. Soon, though, the two of them end up stranded in the middle of the dark woods, causing their paranoid selves to blame each other for their predicament, until they realise that they are being targeted by a mysterious mind-bending figure known as “The Toll Man”, who will only let them pass until a grisly price is paid. Now, both Cami and Spencer must survive the night – and each other – if they are to see past the Toll Man’s mind tricks and stop either one of them paying the toll with their lives.

It’s a concept that really isn’t new in the world of horror – a supernatural figure that can manipulate people via psychological visions, in the middle of the woods at night – but there are interesting elements to it that keep it from being completely redundant. Writer and director Michael Nader (also credited as the film’s editor) has a good eye for some creepy night-lit shots, again relying on pure mood and atmosphere over loud musical stingers and fake-out jump-scares, and with some of the disturbing imagery that he conjures up here it’s clear that he has a strong knowledge of how to make a scene in a horror movie feel, well, horrific.

He also places a good amount of the tension on the uneasy relationship between both the lead characters; Jordan Hayes’s Cami spends most of the movie suspicious that her socially-awkward driver, Max Topplin’s Spencer, has ulterior motives for his passenger, which plays into the rational fear of taxi/rideshare drivers abducting and killing whoever is unfortunate to ride in their vehicles. There is an interesting dynamic between the two of them, as both have good enough reasons for not trusting the other, yet they are forced to place their trust in the other person since there is little option in what is increasingly a life-or-death situation. The performances of the two actors are also convincing enough to make you buy their mutual dislike of one another, though Topplin fares a little better than Hayes whose line deliveries can sometimes feel a little flat.

While it’s obvious that there are good qualities about this film, the things that don’t exactly work about this film make it all the more frustrating, because you have roughly 70% of a wholly decent horror movie, with the remaining 30% really dragging it down to the ground. For one, some of the dialogue can be very obvious and unnecessarily descriptive, with the two leads constantly telling each other what’s happening like they’re narrating their own movie, and not enough is told to us about The Toll Man himself and what kind of powers he has, because it seems like he gains more and more abilities by the second which make it difficult to understand what his deal is or why he’s constantly screwing with these people. Where it seriously shoots itself in the foot, though, is the ending; it completely ruins both the mystery and some of the messages it spent a majority of its time trying to convey to the audience, all while not making a lick of sense and screaming as though it was a last-minute decision just to give audiences a more concrete resolution, even though it makes the whole thing pretty pointless.

It’s a frustrating watch because you can see a much better movie trying to crawl through, if it weren’t for certain things that hobble any of its strong intentions. Hopefully, though, Nader will go on to deliver more solid work after this, because while The Toll doesn’t quite work, there’s enough hints of a much stronger storyteller buried somewhere in there.

The Toll contains some intriguing horror set-ups and decent moments of suspense that show debut filmmaker Michael Nader’s strengths, but some undercooked developments and a rotten ending hobble its ambitions.

The Toll is now available to stream on Shudder.