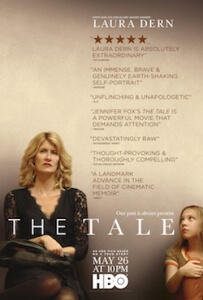 BASICALLY…: Documentary filmmaker Jennifer Fox (Dern) revisits her first sexual encounter when she was thirteen, with a much older man (Ritter)…

Normally, I don’t cover television on this website. I try to keep it strictly focused on theatrical releases, largely because films are more my thing than TV is, and besides, writing a review on new episodes of multiple shows every week would be exhausting (I have enough film reviews to write already!). That also includes movies made for television, which by and large are made for a specific limited audience, and are often ironically harder to seek out than most theatrical releases, so I neither have the time to find and review them, nor do I feel that most of them are eligible for a review on a website that exclusively covers theatrical releases.

The Tale, however, is an extremely rare exception – and boy, what an exception it is.

Originally intended for theatrical distribution following its debut at the Sundance Film Festival earlier this year, writer-director Jennifer Fox’s film was quickly snatched up by HBO Films and subsequently broadcast on their on-demand service late last month, with a UK terrestrial debut set for June 5th on Sky Atlantic. Yet, thanks to a screening of the film during Sundance’s London strand, I was able to see the film in its original intended format on the big screen, and while it technically remains a made-for-television movie, the reason I am writing about it for this website is to alert you all to an extremely powerful piece of work, one that should be experienced in whatever format it is put out in, be it television or theatrical, because it really is that good of a movie.

Fox’s film is based on her own experiences as a teenager, and how in the present she sought to confront her past demons for some kind of closure. In the film’s present, Fox (played in the film by Laura Dern) is a documentary filmmaker and college professor who receives a phone call from her distressed mother (Ellen Burstyn), who has found some very explicit letters she wrote as a thirteen-year-old girl. This triggers a series of flashbacks where Fox looks back upon her thirteen-year-old self (Isabelle Nélisse) spending the summer at an intensive camp with the beautiful and elegant Mrs G (Elizabeth Debicki) and her running coach Bill (Jason Ritter). Her naïve nature and desire to be loved led to Bill grooming her and eventually engaging in sexual activity with her, something that Fox in the present is unable to admit makes her a victim of child sexual abuse.

When you go in with the knowledge that this movie is based on Jennifer Fox’s real experiences – albeit with names and events severely altered for dramatic purposes – you’re amazed by how personal and even angry this story is told. Fox, a documentary filmmaker in real life, uses filmmaking techniques from some of her previous films for this, her first dramatic feature, including “interviews” with some of the film’s characters where you can hear Dern’s voice from the other side of the camera, and POV shots where Dern’s Fox, off-camera, confronts various figures from her past including her thirteen-year-old self and her abuser, all filmed as though they were raw footage of candid conversations that happened to be filmed. It makes for a unique approach to this kind of story, especially one like this that hits home so hard for her, and it allows Fox to play around a little bit with the dramatic structure that you wouldn’t normally see in a film like this. It also enables her to work with actors who deliver fantastically human portrayals of a horrific real-life event, with Laura Dern in particular having never been better than she is here as a woman coping with denial of her victimhood as well as seeking answers as to why she allowed it to happen. Young Isabelle Nélisse, also outstanding, is a poised young presence as the vulnerable young Fox who becomes caught up in all the manipulation of her adult superiors, including an exceptionally creepy Jason Ritter who plays the part like he has the word “predator” drawn all over him (though as someone who watched the whole of Gravity Falls recently, I can no longer hear Ritter’s voice as Dipper in the same way ever again!).

More important than anything, including how well the movie is made, how tightly it’s written and directed by Fox, and how well-acted it is by pretty much everyone, is that this is a movie that should be applauded for its sheer existence. At the post-screening discussion where Fox herself was present, she remarked how she refuses to be labelled as a victim (even though I’ve used that phrase multiple times already in this review – sorry, Jennifer!) and instead prefers to be known as a survivor, and in that regard she has done a magnificent thing by tackling her past head-on in a feature-length movie that audiences can seek out. Something like this could have very easily been something she would have swept under the rug and tried not to acknowledge, but in this new era of #MeToo that has sent the careers of Harvey Weinstein and Kevin Spacey among others down to the pits of hell, it felt vital that this film be unleashed upon the world so that anyone caught up in child sex abuse, whether they identify as victims or survivors, can come forward and be open about their experiences as Fox has done with this film.

Though this may not be getting a theatrical release, it is essential viewing if you want to see an honest, unflinching, and extraordinarily personal account of child sexual abuse told by someone who themselves experienced it. In the US, it should still be available on HBO following its recent debut, but here in the UK it is receiving its terrestrial premiere on Sky Atlantic on June 5th – for the first time ever on Film Feeder, I am urging you to put the telly on and fire up this powerful little movie when it becomes available.

The Tale is an extraordinarily personal recollection of writer-director Jennifer Fox’s own experience with being sexually abused as a child, and is told with tasteful and tailored filmmaking with some extraordinary performances including by Laura Dern who has never been better.

The Tale receives its UK terrestrial debut on Tuesday 5th June 2018 at 10pm, only on Sky Atlantic.