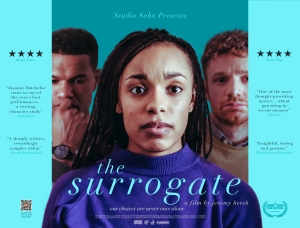 BASICALLY…: A young woman (Batchelor) agrees to be the surrogate mother for a gay couple (Perfetti and Jones), but runs into complications following an unexpected piece of news…

Forty or fifty years ago, a movie like The Surrogate – the feature debut of writer-director Jeremy Hersh – would have been considered rather controversial. Its weighty debates on hot-button topics like surrogacy for same-sex couples, disability, abortion and eugenics might seem par for the course in today’s more inclusive society, but there was a time when very few filmmakers dared to tackle them head-on because, frankly, so much of it wasn’t openly talked about back then.

In some ways, it’s still difficult to talk about some of these things, but what The Surrogate does rather well is approach them in a manner that lets the audience understand it from both sides, so that no matter which side of the argument you fall on, you can still sympathise with the situation its characters find themselves in.

The film begins as Jess (Jasmine Batchelor) discovers that she is pregnant, much to the delight of her best friends Josh (Chris Perfetti) and Aaron (Sullivan Jones), a couple who she has agreed to act as a surrogate mother for. At first, the three friends are beyond overjoyed, and are anticipating their upcoming roles in the child’s life, but their blissful hopes are brutally shattered when a pre-natal test confirms that the child is almost 100% likely to be born with Down Syndrome. Although Jess is undeterred and begins heavily embedding herself in local communities of parents with DS children in order to get a sense of what having such a child is like, Josh and Aaron become more and more noticeably withdrawn, and unwilling to properly engage with the notion of their child’s condition as much as the birth mother is, which leads to them making a decision that ultimately pushes their relationships to the breaking point.

I was initially worried upon first seeing the trailer for The Surrogate, because when it makes the reveal about the child potentially having Down Syndrome, the tone suddenly becomes much starker and melancholic, as though it’s assuming that having such a child be born into this world is akin to a death sentence. Thankfully, The Surrogate not once adopts such a notion, but it does introduce a lot of difficult conversations surrounding the financial and social setbacks of being a parent whose DS child does need constant care and attention. Throughout, we see a slew of naturalistic conversations with supporting characters, such as mother Bridget (Brooke Bloom) who is in a comfortable enough financial position to get her DS son into the better schools – a position that neither Jess nor Josh and Aaron are in, despite their respective jobs in non-profit organisations and law – and Jess’s own mother Karen (Tonya Pinkins) who feels that her daughter is in no sound position nor mind to realistically bring a DS child into the world. All of these conversations, under Jeremy Hersh’s sensitive direction and thoughtful writing, do address both the pros and cons of the situation at play, without turning things into a strawman argument, and always contributing to the main characters’ ultimate decisions which, regardless of the final outcome, are laid out well enough for the viewer to make up their own minds.

This is a film that takes a good, hard look at a lot of other underlying issues surrounding the main situation, among them class, privilege, race, sexuality and even the stigma that surrounds being a single parent with a special-needs child, but it approaches almost every topic with a great deal of thought and care put into every single bullet point on either side. You can feel and side with Jess’s anger and determination as she’s faced with the difficult choice placed upon her, but you are also allowed to feel some sympathy for the couple who do not want their child to be as marginalised for its disability as much as they have been for their sexuality. Neither side is written to be right or wrong, which does make it a very strong debate movie since you are able to look at these two opposing views and not feel as though you are being nudged into one direction instead of the other. Hersh only occasionally falls into self-righteous territory, such as one out-of-place scene which sees Jess loudly berate a restaurant for its lack of proper disabled access, in a moment that comes across more like an aggressive Karen-ish instant for the main character because while she’s technically in the right, she’s still approaching it in an unreasonable fashion. However, most of the rest of the time, the writer-director is able to draw strongly-worded arguments for either side of the party right up until the teary, and sensible (without divulging spoilers), conclusion.

The performances across the board easily adapt to the naturalistic approach that Hersh sets out, especially Jasmine Batchelor who does a fine job at making you understand where she’s coming from when she’s giving her side of the debate, but also isn’t afraid to flex her character’s deep flaws and insecurities in scenes that make her restaurant outburst seem level-headed by comparison. Batchelor often displays a fiery nature to her numerous scenes of shouting matches with those on the other side of the aisle, which may ultimately make her come across to some as being too unsympathetic a person to root for, but there is always a raging sense of humanity and goodwill in her soul, enough to at least make you see how she may come to such a wide array of resolutions.

Again, if you picture this film debuting to audiences in the 70s and 80s, or even as early as the 60s, odds are that it’d be seen as some kind of underground revolutionary picture, in the same way that similarly grounded Oscar-winners like Ordinary People and Kramer vs Kramer, or Ken Loach’s early controversial teleplay Cathy Come Home, were back then. Nowadays, films like The Surrogate barely have eyelids battered at because they’ve become so normalised in the mainstream, but that doesn’t make it any less interesting to discuss, especially when they’re rather good at bringing plenty of meaty themes to the table.

The Surrogate is an evenly-weighed debate movie that dives into heavy topics surrounding its main difficult situation, without favouring one side over the other or letting its naturalistic filmmaking and performances make your mind up for you, though occasionally it steers dangerously close into self-righteous territory.

The Surrogate is now showing in cinemas nationwide – click here to find a screening near you!