The Sun Is Also A Star (Review)

The Sun Is Also A Star (Review) 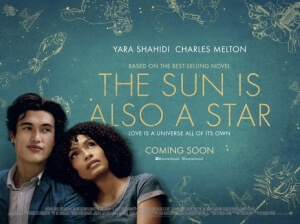 BASICALLY…: Natasha (Shahidi) and Daniel (Melton) meet and fall in love, but it’s on the day that one of their families faces deportation…

Prior to writing her second novel The Sun Is Also A Star, now a major theatrical release, author Nicola Yoon also wrote the young adult romance novel Everything, Everything. That was also turned into a film a couple of years ago, and if you remember my review for that movie then you’ll know what an unintentionally horrifying ordeal it was; the story, and its ultimate rug-pulling twist, felt like the set-up to a psychological horror film, yet it ultimately took the route of a melodramatic teen romance, which made it all the more unsettling when the plot’s more sinister side started to show.

That story was about as misguided as a plot involving life-threatening illnesses and over-protective parents could get, and the good news is that The Sun Is Also A Star is far more balanced and digestible romance that doesn’t drop quite as hard a bombshell as Everything, Everything did which made things far more sinister.

Yoon’s sophomore novel is adapted by director Ry Russo-Young, who tells Yoon’s story about two young people that – surprise, surprise – meet and fall in love on the same day. On one end, there’s Natasha (Yara Shahidi) who is desperately trying to find a way to stop her and her family from being deported back to their native Jamaica the next day; and on the other end there’s Daniel (Charles Melton), a young Korean-American who’s reluctantly preparing for an interview to become a medical student, as per his parents’ wishes, when he’d rather be writing poetry instead. Their paths cross when Daniel, a believer in fate and destiny, spots Natasha wearing a jacket with the words “Deus Ex Machina” on the back, the very words that he wrote down that morning, and they officially meet when he saves her from being hit a speeding car. Daniel convinces Natasha to allow him to try and make her fall in love with him over the course of a day, unaware of her family’s impending deportation unless fate can intervene somehow.

It’s a no-brainer that a connection begins to develop between the two, otherwise this would be a very short romantic drama, and a lot of the film’s achievements lie within the two lead performances of Yara Shahidi and Charles Melton. They easily carry the movie on their collective shoulders, as they both prove to be extremely capable performers that develop an easy chemistry as the film moves along, and individually stand out as actors who have the ability to be both charming and charismatic without losing any of their cool. When the movie calls for them to be sad, ponderous, or even completely head over heels for each other, they pull it off with incredible ease as they have the ability to make you feel incredibly strongly for these characters who are going through some pretty rough patches, Shahidi’s Natasha especially who is being faced with the prospect of having to leave her hometown of New York simply because she wasn’t born there. I can see a strong career for both of them in the future, including Melton who could easily lead a movie by himself if his charismatic performance here is anything to go by.

The acting is solid, especially with its two leads, and Russo-Young’s direction feels more stylistically ambitious than a lot of other YA romantic drama adaptations of the last few years, but when you get into the script things start to become more wobbly. This is the kind of screenplay that likes to bathe itself in pseudo-intellectual discussions about fate, coincidences and even the multiverse, to a point to where that’s all the characters will talk about without coming across as an actual, natural conversation; again, it’s only down to the charisma and likability of its two leads that the very on-the-nose dialogue gets by, because on its own this script feels very pretentious and over-thought, as though it was written by someone who came up with the idea after scrolling through a bunch of philosophical quotes on Tumblr. The amount of coincidences, in a movie about the very nature of coincidences, can sometimes get too much; the building where Natasha has to be in order to meet with a potential immigration lawyer also just happens to be the very same place where Daniel is having his interview for medical school, and that’s not even touching upon some of the more ridiculous twists of fate that draw these two people closer together. Contrivances tend to pop up every now and then just to add drama and conflict to their romance, with odd little segues such as an early scene where a train announcer tells a story to his passengers that ultimately incorporates 9/11 (quick question to any New York residents who happen to be reading this: does this actually happen? Do subway drivers randomly go into storytelling mode whenever the train suddenly stops? And if so, do they usually throw in 9/11 as their “gotcha” moment?), and sometimes it can be too much to bear.

As YA romances go, it’s a step above many of the more recent ones, especially Everything, Everything which, for all this movie’s flaws, makes this look and feel like Casablanca by comparison – it may occasionally get a bit too full of itself, and holds your hand throughout all of its “deep” philosophical ponderings, but at least The Sun Is Also A Star never turns into an unintentional horror during its last third. I still think this every single time I remind myself about what happens in that misguided-as-hell movie:

The Sun Is Also A Star is a watchable romance drama that’s boosted by two strong lead performances by Yara Shahidi and Charles Melton, but its heavy-handed approach to its more philosophical themes come across more as pretentious than actually endearing.