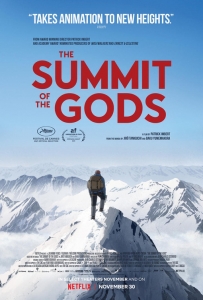 BASICALLY…: A Japanese reporter (Boisseau) discovers a camera that could hold the answer to a decades-old mountaineering mystery…

For some, climbing is more than a sport: it’s a way of life, a reason to exist, an adrenaline rush unlike no other. Many climbers over the years have come and gone with this exact mentality, and this spirit is celebrated to some extent in The Summit of the Gods, a compelling animated drama that explores the desire – nay, the need – to climb some of the tallest mountains on the planet, and then to try and live to tell the tale.

The film, based on the popular Japanese manga series, is a French production with native directors, writers and voice actors taking on the material here (an English-language version was announced to be made available on Netflix upon its release on the streamer, but the version being reviewed here is the French-language edition). It follows a Japanese photojournalist named Fukamachi (voiced by Damien Boisseau), who discovers the existence of a camera that could provide the answers as to whether George Mallory and Andrew Irvine – who, in 1924, disappeared on their ascent up Mount Everest – may have actually been the first people to make it to the summit of the mountain. He learns that the camera is in the possession of Habu Jôji (Eric Herson-Macarel), a renowned climber who went into self-exile some years earlier, and the film follows Fukamachi as he pieces together Habu’s tragic story in order to finally locate him, which ends up with the both of them making their own perilous journey up Everest.

Though it is not officially a Japanese production (despite the manga origins of the tale), the film’s animation owes a lot of debt to traditional anime stylings, which is closely replicated here in quite stunning detail. It’s a similar kind of animation used for something like I Lost My Body, which if one were to look at from a distance could easily mistake for being one of Studio Ghibli’s more mature works, but alas the designs are a bit closer to that of reality, albeit in a gorgeously crafted manner. Most things from the mountain backgrounds to the howling snowstorms are meticulously done via the gentle 2D-animation applied by the filmmakers, with nearly each frame of artistry – especially whenever we are placed on some of these vast and unforgiving mountains – looking good enough to nearly pass as live-action. Visually, it’s almost impossible to fault this film, from its anime stylings to the beautiful hand-drawn qualities of just about every little aspect.

Narratively, though, I’ll admit that The Summit of the Gods took a while to get itself moving for me. The beginning of the film is a little clunky, with character set-ups being mostly rushed, and a sudden shift in focus from our journalist lead to that of the elusive climber that he’s investigating. I’m ashamed to admit that it took me until halfway through a scene to realise that we were now focusing on an entirely different character, because there is very little clarity as to what order things are happening in that I just assumed we were following Fukamachi instead of it actually being Habu. However, once it became clearer as and when we were moving back and forth in time, it got easier to separate the two narrative strands and I could follow things much clearer; I just wish that more had been done initially to not confuse the audience in this manner like it did for me.

As I was getting more and more into it, I did end up appreciating the mature and respectful tone that the movie was aiming for. This is a story where people can die horrifically at any given moment, whether it’s freezing to death above a certain altitude, or hanging on for dear life in mid-air after a single mistake, and it can get intense fast without overplaying the drama. The shots that are brought to life by this animation are quite compelling in that regard, because they really add to the scope of the situation as well as the sheer amount of dread that fills you at every other moment. Even though you are basically watching a collection of drawings in motion, you are still on the edge of your seat due to the film’s ability to create such tension in a single, unflinching shot.

For the most part, you’re thrilled to be on this adventure, and emotionally invested enough in the characters’ motivations that you are curious as to whether they might actually get to the top of this mountain. Certainly, the animation is strong enough to visually grab hold of your interest on its own, as well as how intricate and stylish some of its more surreal sequences are. It’s not a perfect journey, one that also ends a bit abruptly when all is said and done, but the experience is thoughtful enough to make you glad that you at least tried it out for one time.

The Summit of the Gods is an engaging climbing drama that boasts some gorgeous and highly-detailed animation and a respectably mature tone, which overcomes some of its initial narrative struggles in setting up some of its characters.

The Summit of the Gods will be available on Netflix from Tuesday 30th November 2021.