The Stylist (Review) – A Devilish Female Twist On Sweeney Todd 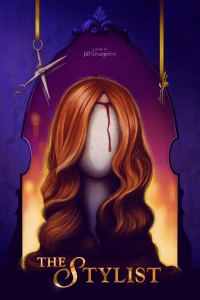 BASICALLY…: Lonely hairstylist Claire (Townsend) finds it hard to suppress her darker desires when she develops an obsession with her regular client (Grant)…

A lot of people are dying for haircuts as soon as barbers and hairdressers open up again, but in Jill Gevargizian’s The Stylist, they really are dying for them.

In the director’s feature film expansion of her 2016 short film of the same name, unassuming women are the victim of a deadly killer with a disturbing way of acquiring her own hairstyles, but before you write it off as Sweeney Todd with curlers, the film also presents a devilishly twisted character study of a lonely woman who takes her obsessions a little too far.

The film follows Claire (Najarra Townsend, also a producer on the film), a hairstylist who takes pleasure in cutting and reshaping women’s hair at the local salon – and then afterwards cutting open their skulls and removing their scalps for her own personal wig collection. Beyond the whole “secret serial killer” lifestyle, Claire is noticeably shy and socially awkward, struggling to develop meaningful connections with others in her small town. The closest she has to a true friend is her most regular client Olivia (Brea Grant), a vain and occupied businesswoman who desperately wants Claire’s expertise for her upcoming wedding, and whose apparent appreciation and respect for her causes Claire to consider giving up her murderous ways for good. However, Claire discovers it isn’t so easy to keep certain urges at bay, and she begins to cross a number of boundaries as her obsession with Olivia reaches boiling point.

Plot-wise, it’s not the freshest when it comes to obsessive thrillers – specifically ones about the unhinged person striking up a friendship with someone else, only for them to go crazy with infatuation for said someone else – but Gevargizian has stylistic flair and enough of a firm focus to bypass some regular genre trappings and make The Stylist a compelling character study, one that neatly bridges between psychological thriller and gory slasher flick. In her script – co-written by Eric Havens and Eric Stolze – Gevargizian affirms Claire’s troubled psyche throughout with some careful dialogue that tells us all we need to know without going any further (we learn that there is only an eighteen-year age difference between her and her deceased mother, which is enough for you to fill in the gaps when it comes to the potential difficulties of young motherhood), as well as a number of moments where Claire, left alone to her own disturbed thoughts, makes manic outbursts while repeating sentences that some of her victims once uttered, further accentuating her loneliness and lack of confidence in her own thoughts. Her direction, too, elicits a creeping sensation as scenes move slowly and carefully while characters communicate in front of static camera shots, and when the film decides to shed more than a bit of blood, those selectively-chosen moments are chilling to watch thanks to a strong mixture of practical effects and squelchy sound mixing.

Gevargizian’s giallo-inspired digital filmmaking – complete with colourful lighting you’d find in a Dario Argento movie – would ultimately be meaningless if there was not a leading actress strong enough to deliver exactly the kind of chilling performance it needs, and thankfully – just as her character does with her victims’ scalps – Najarra Townsend manages to really pull it off. Her mousy and unassuming figure makes her an unlikely match for a serial killer, which is part of what makes both the casting and the character so effective since she can easily blend into society without arousing any suspicion as to her out-of-hours activities, but Townsend’s turn also manages to evoke a great amount of sympathy for someone who you really shouldn’t be left alone with. You can definitely sense in her voice and body language an aching desire to interact with other people as a means to not be alone anymore, which leaves you rather sad that she is making so many illogical decisions because there is nobody there to step in and help her, but things like that can just as easily be cast aside once her murderous side kicks in, and the actress succeeds in being both intimidating and utterly terrifying all at once (her laughter whilst watching cartoons after one bloody kill feels so creepily not-of-this-planet that it’s exceedingly haunting).

As carefully constructed as the filmmaking and performances are, there are a small number of times when The Stylist tends to lag. When it settles into a middle-act lull, the film tends to meander as Claire’s growing obsession with Olivia doesn’t so much progress as it does leave perhaps a bit too long to linger, which can sometimes slow its already-considerate pace down all too adequately. Some scenes also tend to repeat themselves, sometimes on top of one another, which also causes a little bit of frustration when you’re more anxious for the film to finally move forward with its overall narrative rather than just wasting it on things we had just seen previously.

The pay-off for waiting through some of its repetitive scenes is worth it, though, for a killer ending which is every bit as twisted and insane as the film had set itself up to be. It’s a satisfying denouement to a reasonably satisfying movie which, while far from perfect, displays a strong understanding of effective horror filmmaking and thoughtful character development which both filmmaker Jill Gevargizian and star Najarra Townsend are able to deliver in spades. By no means is it something you’d want to watch with a violence-intolerant relative or partner, but for a potential cult classic amongst the psychological thriller crowd, The Stylist is mostly a movie that comes with great flare and, like one of Claire’s most likely styles, outstanding bangs.

The Stylist is both a devilishly twisted psychological thriller and compelling character study, with some strong visual ties to giallo filmmaking within director Jill Gevargizian’s plentiful approach, and Najarra Townsend’s sympathetic lead performance both overcoming some of its lesser qualities, including a not-so-fresh plot and occasional lulls during the middle act – but be sure to sick around for its killer ending.

The Stylist is now available on Arrow Player.