The Strangers: Prey At Night (Review)

The Strangers: Prey At Night (Review) 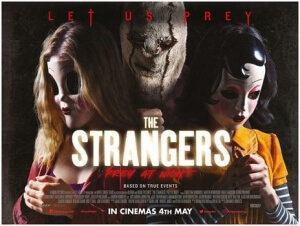 BASICALLY…: A family staying in a secluded trailer park must fight for survival when three masked assailants come knocking at their door…

You can add the 2008 sleeper hit horror film The Strangers to the list of movies I have heard plenty of things about, but just haven’t gotten around to seeing as of yet. I know that it doesn’t make me a particularly good film buff, but I honestly don’t have the time nor the energy to see everything that has ever been made, no matter how much passion I have for film in general. What I have heard about the movie, however, is that while critical reaction was nothing spectacular (it rests at a middling 45% on Rotten Tomatoes), it did turn in a profit with a worldwide gross of $83 million next to a $9 million dollar budget, and it has gained enough of a following for there to be interest in a potential sequel, which had been in and out of development hell for nearly ten years before director Johannes Roberts of The Other Side of the Door and 47 Metres Down notoriety finally signed on to make it.

So, going into The Strangers: Prey At Night with what little knowledge I had of the first one, I wasn’t expecting much other than a standard but reasonably suspenseful slasher film, and that’s pretty much exactly what I got. It’s nothing that I’ll probably remember in a couple of weeks’ time, but it was completely serviceable for what it was.

The film focuses on a family – including Christina Hendricks as the mother, Martin Henderson as the father, and Lewis Pullman as their son – who are on their way to drop mopey and troubled teen daughter Kinsey (Bailee Madison) off at a boarding school, for reasons that aren’t made entirely clear to the audience. They stop off at a near-empty caravan park for the night, and are settling in when they hear a mysterious knock at the door. From there, the night descends into chaos as the family is tormented and attacked by three masked assailants, all of whom will do anything to satisfy their sadistic thirsts.

My understanding about the first film, which again I want to stress I have not seen (so if I get any bits of information wrong, I apologise), is that it’s largely a home invasion movie where these three masked psychopaths just mess around with the uncooperative victims because, as the old cliché goes, they were in the wrong place at the wrong time. Based off of that, I can see why some critics are calling this nothing more than a clichéd rehash of the first, but this one really goes out of its way to try and capture the feel and tone of an 80s slasher movie, from a synth-heavy soundtrack made up largely of 80s pop songs, to how some of the scares depend on lighting and camera focus rather than just the cheap jump-scare music. It’s also got some of the same stock characters and set-ups that you would see in a slasher movie from that era, like the dysfunctional family who in some way or another must come together again by film’s end, or scenes where something or someone unexpected will just emerge from the shadows in a way that actually makes you jump. In that regard, it’s pretty cool seeing a big-screen homage to that kind of slasher movie, which is one that you rarely get to see in cinemas nowadays since most of them are seriously watered down for a PG-13 audience.

There is a seriously limited cast of speaking characters in the film, not including the (mostly) silent masked killers, but they managed to find actors who work with the stock characterisations they are given, and really make it work even for the kind of movie that this is. Christina Hendricks is always good in things, even when she’s in material that’s way below her level of expertise, and she does well here; and with Bailee Madison, on a personal level it’s weird because I’ve seen this actress in several films when she was much younger, for example she was Josh Hutcherson’s little sister in Bridge to Terabithia, and to now see her fully adopt a purely teen role, complete with cigarette smoking and cursing and being an angsty teen brat in certain scenes, it certainly takes some getting used to, but she is a good enough actress to even sell those kind of scenes. I can’t say much for the actors inhabiting the killer roles, because they’re largely covered by masks, but for what they did they were certainly creepy enough to leave at least a minor impression.

None of this in any way indicates that this is technically a good movie, but it certainly doesn’t make it an entirely bad one, either; there just happen to be some decent things about it, which were more than I was ever expecting to find. There are, however, a number of negative things that can easily be said about The Strangers: Prey At Night; for instance, characters get themselves into situations that can easily fix everything, but they don’t only because this movie has to make it to under 90 minutes somehow, although it ends up making some of the characters really stupid in some parts. There’s also a problem I have with the killers, and it’s that they really don’t seem to have much motivation for what they are doing. At least in the first one, which again I want to stress I haven’t seen but know enough about it to make this point, it was a “wrong place at the wrong time” situation; here, they’re just being dicks to these people for no good reason, and it just makes it a bit frustrating when you try and understand their psychology behind these attacks. At the beginning, a title card says this is all based on real events, and if the real killers are anything like they are in this movie, then they really need to find a normal activity to fill up their Friday nights instead of just making other people’s lives a living hell.

It’s certainly silly and filled with things you’ve seen plenty of times, but I’m still surprised that there was this much I could actually say I thought was okay about this film; again, it’s likely I’ll forget it in a couple weeks’ time, but for now I’m glad I enjoyed this strange ride.

The Strangers: Prey At Night is a modern slasher movie that pays serviceable homage to films of its type from the 1980s, and has some decent scares and good actors to overshadow its much sillier and clichéd moments.