The Spy Who Dumped Me (Review)

The Spy Who Dumped Me (Review) 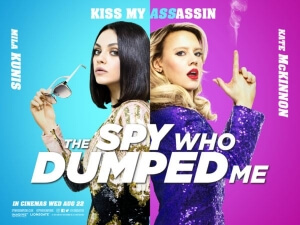 BASICALLY…: Audrey (Kunis) and her best friend Morgan (McKinnon) find themselves in danger when Audrey’s ex-boyfriend (Theroux) reveals that he is a CIA agent…

I’m ashamed to admit that whilst watching The Spy Who Dumped Me, I found myself flashing back to the horror show of a movie that was Grimsby – not that this movie is anywhere near as awful as that monstrosity (in fact, this one seems like an absolute masterpiece in comparison), but it does have a similar notion of a spy movie being constantly interrupted by a dumb comedy, though with significantly less elephant-related “gags”, I’m sure you’ll be very pleased to hear.

Though that’s really where the comparisons with that unholy abomination of a motion picture end, The Spy Who Dumped Me still has one too many problems of its own, mostly concerning its pace, its structure, its tone, and its overall lack of consistently funny jokes for something that partly labels itself as a comedy.

The movie opens with Audrey (Mila Kunis), who is reeling after her boyfriend Drew (Justin Theroux) dumps her over text. She later learns that Drew is, in fact, a spy working for the CIA and has a number of people out to kill him, so he entrusts a cryptic USB drive to Audrey and tells her to travel to Europe and hand it over to his contact. Accompanied by her best friend Morgan (Kate McKinnon), they travel overseas to accomplish the mission, which sparks a never-ending series of espionage, backstabbing, and a surprising amount of gruesome violence.

When the movie gets into its first major action scene once everything in the plot has been set up to the best of its ability, it suddenly goes from mild and very forgettable comedy to a shockingly bloody kill zone; people are shot in the head, stabbed in the arm, body-slammed to the floor whilst breaking their necks in the process, tortured by creepy Russian former athletes, and even have body parts removed post-mortem. I’ll give the movie credit in that it really does go as far as it can in obtaining an adult rating, but all this graphic violence comes at the expense of any real sense of comedy, in a movie that’s supposed to blend action and comedy together seamlessly. This movie’s idea of obtaining laughs comes more from the interplay between Kunis and McKinnon, who have fine chemistry with each other but are not given much substantial material to work with in terms of raising laughter, and their seemingly endless and largely laugh-free ramblings that drag the movie out to an unnecessary near-two-hour running time. The comedy really does not fit well with the otherwise bloody violence the movie also tries throwing at you, often leaving you with tonal whiplash whenever they stop the movie dead just so Kunis and McKinnon can have banter with each other, and when the movie does turn surprisingly violent it’s so much so that you’ll keep forgetting that it’s also meant to be funny, when instead it’s more just unpleasant than anything.

It has a slightly off-putting structure, starting out in the movie’s present but then flashing back to one year earlier, to when Audrey and Drew first met, and at first you think this is where the movie is really going to start, but then it cuts back to the present for the rest of the movie while occasionally cutting back to one year prior at one or two intervals during the main plot. It’s odd because that flashback really doesn’t add to the plot of the movie, other than to provide a bit of background to Theroux’s character (and even then he never mentions anything that links to that scene at all), and for a film called The Spy Who Dumped Me it never goes into their relationship outside of that one scene, with even the titular dumping happening off-screen, right before the movie actually introduces these characters who apparently had a fruitful bond with each other up until recently. They should have either stuck to their guns and have the movie actually start from that flashback, or cut it and just let us assume that their relationship was fine up to a point; it would have, at the very least, trimmed a good few minutes from the movie’s needlessly long running time, which frustrates you when you think that you’ve reached the third-act climax but then realise there’s at least a good half-hour left, even when most of this plot should have been wrapped up a short while ago.

There’s just nothing to this movie that stands out from other spy-themed action comedies like this, other than perhaps the shocking amount of graphic violence that it likes to suddenly throw in your face, which favours the action side of things more than the comedy side. Again, Kunis and especially McKinnon are trying their best, and the few light chuckles I got out of this movie were from some of McKinnon’s deliveries of certain lines, but they’re ultimately let down by a script which fails to find the right tone for its story, nor does it give them solid comedic material to work with that compliments both their natural abilities in the genre. It’s a movie that really does go in one ear and swiftly out the other, and honestly I’m surprised that I remembered this much about the film before sitting down to write this review, because it’s so forgettable and not in the least bit worthy of your time. It’s by no means the worst comedy so far this summer – Life of the Party, Book Club and Show Dogs were all much harder to sit through than this – but The Spy Who Dumped Me still isn’t a particularly funny movie, nor does it entirely work as a movie on its own.

But at least there were no scenes of Mila Kunis and Kate McKinnon hiding in an elephant’s vagina; it’s weird that I even consider that to be a quality for any film, really.

The Spy Who Dumped Me isn’t a very satiable action comedy nor is it a particularly strong movie in its own right, as it struggles with tone, structure, pacing, and a shocking and uncomfortable level of graphic violence that does not go well with something that’s trying to be wildly humorous.