The SpongeBob Movie: Sponge On The Run (Review)

The SpongeBob Movie: Sponge On The Run (Review) 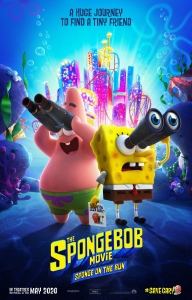 Nickelodeon’s long-running cartoon series SpongeBob SquarePants, which has now been on the air for more than twenty years, is a fascinating oddity that has become a worldwide phenomenon. The nonsensical tales of a sea sponge that lives in a pineapple with a pet snail named Gary, is best friends with a dumb starfish and a squirrel in a spacesuit, and who works as a fry cook at a local fast food restaurant, have captured the imaginations of children and (most likely) stoners everywhere, tickling their senses giddy with odd and even surreal visual humour that borders on insanity.

So far, it has also spawned three theatrical spin-offs, each one as strange and surreal as the last, but Sponge On The Run sets a new level of oddness that even the most hardcore fans probably won’t be expecting, in that this film actually seems to have a functioning heart underneath all of the goofiness.

Released internationally on Netflix after COVID-19 forced the hand of Nickelodeon’s parent studio Paramount, Sponge On The Run immediately sets itself apart from its predecessors by adopting a new 3D animation style which, similar to The Peanuts Movie and Spider-Man: Into The Spider-Verse, slows down the frame rate to closely resemble 2D or even Aardman-esque stop-motion. In this new CGI version of Bikini Bottom, we see that things are normal – in the very loosest of terms – for our hero SpongeBob (voiced, as ever, by Tom Kenny); he and his best friend Patrick the starfish (Bill Fagerbakke) are eternally optimistic and silly, much to the annoyance of his next-door neighbour Squidward (Rodger Bumpass), and he’s working as hard as ever at the Krusty Krab under the watch of his boss Mr. Krabs (Clancy Brown), while the evil Plankton (Mr. Lawrence) continuously plots to steal the secret formula for his rival restaurant’s best-seller, the Krabby Patty. For his latest scheme, Plankton kidnaps SpongeBob’s pet snail Gary and hands him over to King Poseidon (Matt Berry), who is eager to find a snail he can use as face cream, so that SpongeBob can venture out and rescue him while leaving the Krusty Krab defenceless. SpongeBob, along with Patrick, easily takes the bait, and the two set out on a journey towards the Lost City of Atlantic City, encountering along the way wise tumbleweeds with Keanu Reeves’ head inside of it, an Awkwafina-voiced robot, the Las Vegas-like environment of said city, and even a gang of cowboy pirate zombies led by Danny Trejo which also counts Snoop Dogg as one of its members.

The plot is, to be expected with any SpongeBob material, wildly bonkers and throwing just about everything it can to the wall in order to see what’ll stick. It’s not quite as out-there and trippy as Sponge Out Of Water or even the first film from 2004 were, although there are still some weird elements on display here (I believe that I mentioned the Keanu Reeves tumbleweed) which, if nothing else, serve as a solid reminder as to why it’s so popular amongst its fan base. It feels very much like a movie made by and for fans of the cartoon (and we’ll touch upon why that is shortly), which also means incorporating a lot of the odd humour that originally got people so interested in it, along with surreal visual cues and childish slapstick that’ll make both kids laugh and adults somewhat confounded. It is perhaps the most SpongeBob movie of them all, because it has everything you know and love/hate/moderately tolerate (delete where appropriate) about the show, from the characters to the silly humour and so on, all without forcing in anything for the sake of it.

The animation is rather gorgeous, full of colour and many dimensions, although if you’re more used to seeing SpongeBob and his pals in regular 2D animation then the sudden shift to 3D might perhaps throw you off a little at first. The textures of backdrops and character designs are impressively rendered to a point where it almost seems as though you are also among the pandemonium in Bikini Bottom and beyond, fully transporting you into this cartoon world with all of its eccentricities. The humour can be hit-and-miss, especially if you’re not as into the show as a lot of other people are, but there are some amusing moments that do get a fairly decent chuckle; the very presence of Keanu Reeves rolling around as a tumbleweed is hilarious enough on its own, and the actor’s deadpan delivery helps him steal all of his scenes because, again, it’s so ridiculous that you can’t help but laugh. There are also a few nice messages for children to absorb, and a climax is filled with a lot of sincere sentiment that will, perhaps for the first time in the entire history of SpongeBob SquarePants, perhaps leave you a little moved.

The film is dedicated to SpongeBob creator Stephen Hillenburg, who sadly passed away in 2018 due to complications with his ALS diagnosis, which also makes Sponge On The Run an even greater source of heart because, by being the most SpongeBob movie yet, it’s perhaps the best tribute one could make for another person’s creation. Whether or not you’re a fan of the cartoon, it’s undeniable that there is clearly a lot of love put into this by the filmmakers and animators, who have come together from a mutual adoration for Hillenburg’s characters, and put together a sweet and genuine love letter to them in a film that combines all the silliness you’d expect, but also a fair amount of love which, especially this year, is sorely needed.

The SpongeBob Movie: Sponge On The Run is a fun and silly family adventure that combines all the weirdness you’d expect out of the long-running cartoon series, but a sizeable heart and gorgeous new animation style pay loving tribute to its legacy and its late creator, Stephen Hillenburg.

The SpongeBob Movie: Sponge On The Run is now streaming on Netflix.