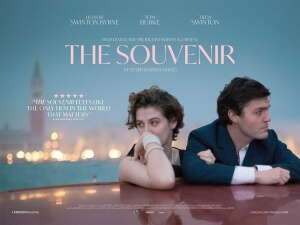 If Pedro Almodóvar’s Pain and Glory is a self-reflective story of a veteran filmmaker in the twilight of their career, then Joanna Hogg’s The Souvenir is a tale about a filmmaker not only trying to find their voice, but dealing with the raw and sometimes toxic environment that threatens their chance of a voice. Both are intimate, exquisitely made semi-autobiographical stories about very personal events that unfolded in the filmmakers’ own lives, but in Hogg’s case she tells it in such a matter-of-fact way that it almost feels like a documentary, with a hint of arthouse joy thrown into the mix.

The results will certainly not be for everyone – take one look at the Rotten Tomatoes ratings, with critics giving it an 89% rating as of this review, but the audience score is a rotten 32%, which shows a sharp divide between journalists and the average movie-going audience – but whatever your final opinion of the film is, you can’t deny the sheer smoothness and natural nature of the final product, which if nothing else makes it an intriguing watch.

The film is set in the early 80s, when young Julie (Honor Swinton Byrne) is studying at a film school in Knightsbridge. She has aspirations to make a feature film set on the docks of Sunderland, although her tutors – all male, incidentally – consistently question her motives, especially seeing how she herself comes from a privileged background and might not be qualified to tell such a story. Things seem to turn around for her, however, when she meets Anthony (Tom Burke) at a party. He is an older fellow, but also extremely complicated; rarely ever seen out of a fancy suit, he consistently claims to work at the Foreign Office (although we never actually see him in his profession), and acts extraordinarily condescending towards Julie when she’s trying to explain her vision. Nonetheless, she’s smitten by him, and the two eventually start living together – but she starts to see a more untrustworthy side to him, when he repeatedly asks her for money (which she obediently gives him) and needle marks start showing up on his arm.

The best way to describe this relationship is if it was Fifty Shades of Grey without the rough sex; this guy is clearly a sleaze, indulging in questionable behaviour while taking full advantage of his partner’s good nature and supposed inability to stand up for herself, yet she cannot bring herself to say no to him, even when he admits to doing some very terrible things behind her back. The consistent manipulation and sheer arrogance of this guy is clearly contemptable, but her passive approach to what is clearly a toxic relationship she has found herself in is arguably more troublesome; she doubtlessly loves him, to a point to where she very quickly forgives him for some of his wrongdoings when anyone else would have used that as an incentive to finally kick them out of their lives. Hogg, who took inspiration from one of her own relationships whilst at film school, paints a very complex portrait of a couple who by all accounts should not be together, yet their insecurities and major character flaws are negated by the clear adoration they share for one another. Through tight direction, focused cinematography and calculated editing, we see their questionable relationship unfold in fragments where either something or nothing is happening in their lives, but it’s the strength of the filmmaking as well as the naturalistic conversations that characters share with each other (much of the dialogue was improvised) that you’re hooked in spite of yourself, even when nothing is actually happening.

It also is filled with performances that are understated – nobody ever has an emotional breakdown you’d find in most dramatic movies – and feel so much more real because of it. Honor Swinton Byrne, whose only other film credit is from playing the younger version of her real-life mother Tilda Swinton (who also appears in a supporting role here as Julie’s mother) in Luca Guadagnino’s I Am Love, is a revelatory discovery here, as she perfectly embodies the mousey and uncertain persona that Hogg is clearly aiming for with this semi-autobiographical character. However, she also brings a calm and controlled manner to the performance which makes her passiveness feel more understandable, even if you’re not wholly agreeing with some of the character’s choices, all of which adds up to a breakout role if ever there was one. Tom Burke also exhumes charm as the main love interest who, again, makes it incredibly easy to see why anyone would fall for him despite him being a walking, talking red flag, with both him and Swinton Byrne sharing a fluid chemistry that can at times be funny and sweet but other times absolutely devastating. As for Swinton Sr., the Oscar-winning actress is good in just about everything she does, and here is no exception as what little screen-time she has here she fills with quiet pathos and a memorable amount of concern that only a mother could have for their daughter (it helps, then, that both mother and daughter are acting opposite each other often in this movie).

The movie is very much a slow burn, and like most other movies with this sort of pacing it could easily infuriate some of the less patient viewers, but there is a great deal of substance to be dug up here that those who stick with it shall be easily rewarded with quiet drama and complex characters. What’s more, the end credits tease a sequel that has already been filmed, so there’s plenty more of this cinematic exquisiteness to come.

The Souvenir is a exquisitely made drama that dives deep into a complex and arguably toxic relationship while making everything feel as natural and beautifully understated as possible, including the performances which include a breakout turn by Honor Swinton Byrne who is a revelatory discovery here.

Want to decide what the movie’s like for yourself?
Check out The Souvenir showtimes in London
via