The Souvenir: Part 2 (Review #2) – A Subtle and Confident Standalone Sequel 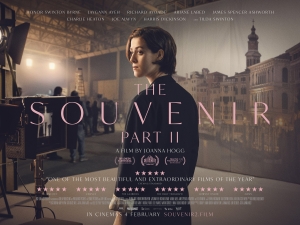 The original plan for re-reviewing The Souvenir: Part 2 (previously reviewed last year during its run at the BFI London Film Festival) was to rewatch writer-director Joanna Hogg’s original from 2019 – which I guess should now be referred to as The Souvenir: Part 1 – and then see how both parts form a cohesive whole when viewed back-to-back. However, the times just didn’t align (i.e. I completely forgot), and so here I am once again looking at this film as a standalone instead of a direct continuation of a pre-existing film.

The thing is, though, The Souvenir: Part 2 almost doesn’t need that first part to work. Sure, a lot of vital information is contained in that previous entry, but Hogg’s follow-up fills you in on all the necessary details before focusing on its own path, which still manages to engross the viewer even if they haven’t seen the original.

To briefly catch you up on events in the Souvenir-verse – spoiler warning for a film that’s more than two years old – film student Julie (Honor Swinton Byrne) has endured a rather toxic relationship with charming but manipulative Anthony (played in that movie by Tom Burke), which ends tragically when he fatally succumbs to his heroin addiction. Now, Julie attempts to analyse the ins and outs of her relationship through the process of making her graduation film, which she bases on her own experiences much to the concern of her professors who strongly advise her against this route. Nevertheless, Julie ploughs ahead despite frequent hiccups along the way, including disagreements with cast and crew over the direction and overall focus of her piece, and her own search for closure regarding the mysterious nature of her former lover.

As before, Hogg injects a very naturalistic directing style where the performances and dialogue exchanges feel unrehearsed (in a good way) and suitably unshowy, with big dramatic moments often compressed to a grounded level instead of devolving into shouting matches or teary monologues. It is a subtle form of filmmaking that feels a tad more accessible than the surprisingly divisive first movie (which currently holds a low 36% audience rating on Rotten Tomatoes opposite its 89% critics rating), because here Hogg manages to expand on a number of themes and ideas that make for more uplifting fare and aren’t so bogged down by muted toxicity. By adopting a more analytical approach to the central relationship rather than watching the whole thing play out in seedy full, a lot of intriguing situations come about; during production on her graduation film, Honor Swinton Byrne’s Julie is asked about the motivations of her Anthony character by its actor (Harris Dickinson) and whether it is more of a nostalgic romanticisation rather than a much truer portrayal. The mixed signals given by Julie indicate a struggle to understand her own version of the truth, and is a pivotal stepping stone for the character – which Honor Swinton Byrne plays impeccably – to truly evolve from her dark past and properly come of age.

Hogg is much more interested in exploring Julie’s personal issues this time round than the toxic relationship that she wound up in last time, and since The Souvenir: Parts 1 and 2 are collectively a semi-autobiographical piece there is a greater responsibility on the filmmaker’s part to present a version of events that feel true and honest, which here she ends up succeeding more at than with the first part. You can feel a stronger sense of confidence in the storytelling as it leads towards a conclusion that perhaps isn’t so obvious from the outset, and isn’t afraid to dabble in a bit of David Lynch surrealism every now and then, like an extended montage that incorporates several film styles into an abstract visual journey, and a final shot that is bound to cause debate and even a bit of confusion amongst audience members. Brief tangents like a hook-up with an actor played by Charlie Heaton (which gets awkward when menstruation blood comes into the picture), or several scene-stealing encounters with Richard Ayoade’s temperamental director, are worked in neatly and with greater precision, coming and going whenever they’re needed while keeping the focus solely on the protagonist’s own journey of self-reflection and acceptance.

I repeat my previous statement that The Souvenir: Part 2 is a stronger entry than the first film, not only because it feels more confident and less tied down to questionable focuses, but because it actually does feel like much more of a standalone feature which has its own well-rounded arcs and pleasing attributes that lend it a softer, but no less impactful, touch that will please viewers more.

The Souvenir: Part 2 is a strong standalone sequel that feels more complete and confident than writer-director Joanna Hogg’s first entry, with the filmmaker expanding on many themes and ideas that make for a more interesting and thus more rewarding film to watch than the previous part.

The Souvenir: Part 2 will be released in cinemas nationwide on Friday 4th February 2022 – click here to find a screening near you!