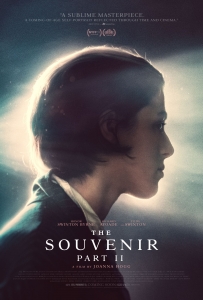 BASICALLY…: A young film student (Byrne) deals with the emotional aftermath of a close tragedy…

This review of The Souvenir: Part 2 was conducted as part of the BFI London Film Festival 2021.

Of all the movies to get sequels, not many probably suspected writer-director Joanna Hogg’s artsy semi-autobiographical romance The Souvenir would be one of them. At first glance, it doesn’t seem like a movie that would immediately tease a follow-up in its ending credits, with its reasonably self-contained narrative arc leading to a natural conclusion on most fronts, but lo and behold right at the very end of the credits the movie promises that The Souvenir: Part 2 is on the way, to be filmed after a brief pause in between films so that time can naturally pass.

It was a good decision on Hogg’s part to not film both her movies back-to-back, as would be the case for most multiple-part films, because time has allowed certain themes from the first movie to mellow and spawn something new and unexpected, resulting in a film that is ultimately stronger and more emotionally resonant than even people who saw and loved that first part could predict.

When we last left off in the saga of The Souvenir – beware: major spoilers for that film inbound – young film student Julie (Honor Swinton Byrne) has been left heartbroken by the death of her boyfriend Anthony, who despite his charismatic nature was ultimately manipulative and mentally abusive in their relationship, until his overdose from heroin. Here, we find Julie trying to get herself back on track as her graduation project looms, choosing to forego her original idea to make a film that almost exactly mirrors her relationship with Anthony. However, it becomes increasingly clear that the project is simply Julie’s way of trying to analyse the ins and outs of her past ties to him, which could jeopardise her ambitions and ultimately get in the way of the future she always wanted to make for herself.

As with the first film, The Souvenir: Part 2 is a semi-autobiographical outing that shows Joanna Hogg’s days at film school, specifically the National Film and Television School which is paid strong homage to at several functions here (albeit under a fictional name). She spends a lot of time here exploring the studios made available to budding film students, and focusing on the DIY aspects of building sets, liaising with actors and cinematographers, and sitting in editing bays going over the dailies. Hogg continues bringing her striking naturalism to such scenes, with her actors delivering lines with such precision and timing that you’d almost swear that they were improvised on-set (which they probably were, but the fact that it’s at all hard to tell makes it all the more impressive). The filmmaker also seems to have much more of a focus this time round, with a definite pacing which sets itself apart from the much slower first movie, and more of an idea of what her endgame is instead of leaving it to any future instalments. It also allows her to get a bit more creative and artistic with sequences, including a surreal climactic montage that seamlessly travels through multiple film genres and styles which is quite fascinating and even fun to watch.

Being away from her character for a short while has also helped lead actress Honor Swinton Byrne, who had previously delivered a stunning breakout turn in The Souvenir: Part 1 (as I suppose it is now called), to find more confidence and composure in her performance as Julie. The actress is always captivating to watch here, whether she’s simply gazing into the distance with her eyes lost in thought, or engaging in some awkward menstrual sex with a handsome young actor (played briefly by Stranger Things star Charlie Heaton), and she truly comes into her own with a naturalistic and steadfast approach that puts her alongside her real-life mother Tilda Swinton (who, as before, plays a small role as Julie’s mother). Scene-stealing supporting turns by Richard Ayoade as a hot-tempered director, and Harris Dickinson as an actor hired for Julie’s graduation film, certainly serve their purpose and don’t overstay their welcome, but this is Honor Swinton Byrne’s movie through and through, brilliantly encapsulating the wide-eyed filmmaker-to-be that Joanna Hogg loosely based on herself.

Between both movies, The Souvenir: Part 2 is perhaps the stronger one because it pushes forward a lot more with its interesting ideas and subtle character growth, whereas most of the first film was solely focused on this rather toxic relationship that was almost destined to end badly (which it does). It shows Hogg as a strong filmmaker who can take existing material, even if it is her own, and expand it into an emotional experience that even those who weren’t that keen on the first part could appreciate. It doesn’t entirely work as a standalone, only because knowledge of that first film is paramount to understanding context and themes on display here, but if you go into this one having seen The Souvenir: Part 1 and interested in seeing what happens next, it’s a satisfying resolution which adds to the story as well as introduce some of its own compartments for extra comfort.

While The Souvenir: Part 3 is unlikely, if not impossible, then this is a pretty decent place for this story to stop.

The Souvenir: Part 2 is a strong continuation of writer-director Joanna Hogg’s semi-autobiographical story, expanding on several themes for a much more emotional impact, and headed by a steadfast turn by lead actress Honor Swinton Byrne who more than comes into her own as an incredibly natural actress, although it might lose those who had not seen the first film beforehand.

The Souvenir: Part 2 will be released in cinemas nationwide on Friday 21st January 2022 (as of publication).