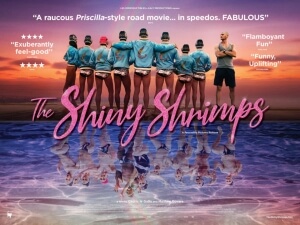 BASICALLY…: An Olympic athlete (Gob) is forced to coach an amateur gay water-polo team after making a homophobic statement on television…

It’s a little hard to think of The Shiny Shrimps without also thinking about last year’s underwhelming British comedy Swimming With Men; after all, both are comedies about a group of guys coming together through the power of water-based sports (funnily enough, both are also based on real teams, with the one in this film being based on the group that co-director Cédric Le Gallo once belonged to), except there’s a fundamental difference between the two, and that’s the fact that The Shiny Shrimps actually does it well. It hits just about every target that Swimming With Men tried to hit but couldn’t quite cut it, not to mention that it’s funnier, it’s more inclusive, and it’s got a lot more heart to it which really keeps it afloat.

The film, already a hit in its native France, starts off with fading Olympic swim champion Matthias Le Goff (Nicolas Gob) facing scrutiny for using a homophobic slur against a gay reporter on television. As a means to get back into the good books of the sporting world, he is forced to coach a gay team and get them ready for the upcoming Gay Games in Croatia. He ends up with the Shiny Shrimps, an amateur water-polo team that’s too busy fooling around to actually be any good, but Le Goff begrudgingly kicks them into gear before soon heading out with them to face the gay world’s biggest sporting champions.

You can pretty much guess where things go from here, with the messages about tolerance and acceptance being very obvious from the get-go, and with this being a sports movie – a genre known for largely sticking to a singular, but effective, formula – it shouldn’t be at all surprising to see what later happens. It perhaps uses one cliché too many, but the predictable storyline merely serves as a backdrop for the giant sense of flamboyant fun the movie unashamedly embodies throughout. It’s impossible not to like these characters, as they’re so full of life and energy that it’s infectious, and you really do believe the chemistry they share with each other as they lightly swap insults or even get a little flirty with each other. I’ve seen write-ups on this film that call these characters out for being stereotypes, and I can definitely see where they’re coming from – some of their defining traits seem to be flailing about, being obsessed with choreographed dance, lip-synching along to Celine Dion songs and most other gay clichés you can think of – but it would be a lot worse if the movie took a more mean-spirited approach and wanted us to laugh at them for being so flamboyant, which it really doesn’t; a lot of the film’s heartfelt moments come from their sweet comradery, as over-the-top as it can definitely be at times, and at no point does it ever expect us to shame them for who they are but rather celebrate their openness.  Are they stereotypes? In a way, yes. However, they are stereotypes that are not only done well through a mixture of lively performances and focused writing, but also compliment the film’s unwavering feel-good factor that it aims for, and more often than not succeeds at hitting.

The strongest moments in the film come from when we just see this team hang out with each other, and each one of them has their own memorable quirk or even their own mini sub-plot – one, for example, has to pretend he’s at a conference in Germany to appease his unimpressed husband who’s stuck at home looking after their twin infants; another one is facing an inevitable tragedy which may or may not be a spoiler to say comes back later on in a rather devastating manner. When it’s focusing on the designated lead, the straight-laced and masculine Le Goff, it’s not as engaging because the character is a bit too much of a stick in the mud to empathise with, even as his homophobia does start to waver as the film goes on, and it’s an archetypical character that you’ve seen done more interestingly in other things, right down to the sub-plot about him trying to reconnect with his estranged daughter which, again, is one of the many clichés this movie likes to toss about. Luckily, there’s just enough of the team to go around, and they collectively make the film a fun sit, particularly during the road-trip portion of the film where they travel in a tourist bus from Paris to Croatia, which is also where the film clearly takes inspiration from another LGBT cult classic Priscilla, Queen of the Desert, an homage it does fabulously and with enough of its own flavour to differentiate itself.

It’s not a movie you’d want to check out if you’re looking for something that deviates from the sports movie formula, as it does use nearly every trope in the book which makes it very predictable, but it’s a film that’s concerned with the journey more than the destination, and thankfully this is a rather joyous, if imperfect, trip to head out on with a group of people that’s impossible not to like, even though it’s agreeable that they perhaps are a little too fabulous for their own good. I certainly had fun with this movie, and can even see it becoming something of a future cult classic among certain audiences, which is a lot more than I can say about something like Swimming With Men, which I completely forgot about until I saw it pop up in other reviews for this film, a notion that pretty much says it all about the impact that film left. At least with The Shiny Shrimps, you have a lot more fond memories to choose from when looking back on it.

The Shiny Shrimps is a fun and joyous crowd-pleaser which certainly hits nearly every sports movie cliché in the book, and perhaps overdoes the flamboyancy of its central sporting team, but it has a lot of heart to it with a whole bunch of likeable characters to spend time with on this predictable but sweet journey.

Want to decide what the movie’s like for yourself?
Check out The Shiny Shrimps showtimes in London
via