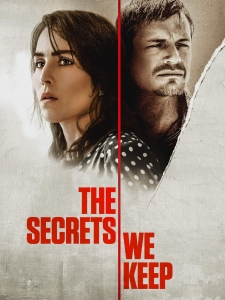 BASICALLY…: In post-WW2 America, a Romanian migrant (Rapace) becomes convinced that her neighbour (Kinnaman) is a Nazi who previously wronged her…

At one point during her international breakthrough as Lisbeth Salander in the Swedish-language version of The Girl with the Dragon Tattoo, Noomi Rapace takes sweet, delicious revenge on her rapist by tying him up, sodomising him, and then blackmailing him with damning video evidence of his crime – all before tattooing “I am a sadistic pig and a rapist” across his body. Needless to say, the actress doesn’t exactly go to those levels in her new revenge thriller The Secrets We Keep, but there is still an air of her Lisbeth interpretation here as she, along with the rest of the pulpy material she’s working from, gets all too deep in the grittier side of retribution – but here, perhaps doesn’t go deep enough.

In the film, Rapace is Maja, a Romanian woman living in suburban 1950s America, with her husband Lewis (Chris Messina) and their young son Patrick (Jackson Dean Vincent). Maja lives a reasonably happy family life, but she is still plagued by trauma from her experiences as a vagrant in war-struck Europe. One day, she catches a glimpse of a man she appears to recognise all too greatly; he is Thomas Steinman (Joel Kinnaman), supposedly a Swiss national who, like Maja, has emigrated to America to live the comfortable family life, but Maja is utterly convinced that he is in fact a former Nazi named Karl, who was part of a German squadron that did unspeakable things to her and her family one fateful night. It doesn’t take too long before Maja’s suspicions get the better of her, because she soon kidnaps him and, along with a reluctant Lewis, holds him captive in their basement, where she resorts to extreme measures in order to get him to confess about his true identity and what he did, in order to get some closure for her own troubled history.

Under the direction of Yuval Adler (who also wrote the script with co-writer Ryan Covington), The Secrets We Keep largely plays its B-movie revenge plot very straight, and does not shy away from some rather gruesome torture methods that you wouldn’t normally expect to see, even in a movie like this. It never becomes as graphic as, say, a Saw film does, but there are a couple of moments that leave enough of an impression of what’s happening to make you squint your face in revulsion, and when they work – and not marred by some blatant quick-cut editing – they intentionally leave a sour taste in your mouth. They, by the way, are mixed somewhere in the middle of some very tender scenes where Noomi Rapace (who is very good in the movie, by the way) is delivering tear-filled monologues about her past traumas. Adler’s direction seems to want to have it both ways, by giving it the tone and look of a dark suburban drama while also tapping into a much more hardcore revenge thriller complete with scenes of torture, and sometimes the juxtaposition achieves the desired effect, but other times it seems like more should have been done to balance out the two opposing tones instead of letting them overlap each other from time to time.

It’s also one of those movies that takes its premise as far as it can reasonably go, and barely goes further than just that. Before you can consider the illogical ways that both husband and wife are somehow getting away with keeping a man tied up in their basement, everything is resolved and concluded in a timely order, during a climax which is disappointingly uneventful given all the build-up of this tension and drama. Admittedly, it feels like a more complete resolution than another recent crime thriller The Little Things did, but after everything you’d think they would at least get Noomi Rapace to do something a little more bad-ass, instead of leaving things on a rather abrupt note.

While there is some very strong acting and some effective violence that, when inflicted, feels as raw and painful as it needs to be, The Secrets We Keep is a thriller that doesn’t entirely live up to its potential, with a pedestrian plot that ultimately goes down very few paths, often with clashing tones that didn’t need to be so jarring.

On a final note, this is the second film I’ve seen in a row that contains an explicit visual reference to Alfred Hitchcock; during a tense stalking scene, which you could argue feels rather Hitchcockian, characters pass a cinema showing the movie North by Northwest. Next to The Woman in the Window, which literally shoved its Hitchcock call-backs right in your face, this is far subtler by comparison, but in a heartbeat I’d rather watch that one again over this, because at least that film – while inherently worse – was a lot more fun to sit through.

The Secrets We Keep has occasional moments of effective violence and some strong performances, but a clash of tones and a pedestrian plot with an abrupt conclusion leave it in a forgettable state.

The Secrets We Keep is now available on Sky Cinema and NOW TV.