The Secret Life of Pets 2 (Review)

The Secret Life of Pets 2 (Review) 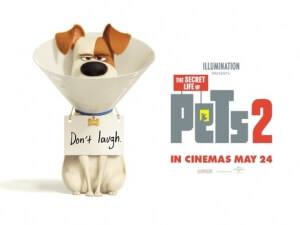 BASICALLY…: The pets get up to more crazy adventures when their owners are out or not paying attention…

When Illumination debuted their latest animated feature The Secret Life of Pets back in 2016, it was another easy hit for the studio – nothing to do with its overall quality, mind, but because of their relentless advertising that pretty much forced awareness for it down our collective throats, leaving us little choice but to actually see it, despite it being an uninspired rip-off of much better family films like Toy Story. Their strategy worked, as it brought in just over $100 million during its opening weekend in the US alone, pretty much guaranteeing that they’d use this shameless marketing strategy for many of their upcoming films, from Sing to Despicable Me 3 to The Grinch.

However, for its sequel, the marketing has been more noticeably muted – there have barely been any posters for it outside of a few character ones, the trailers were mostly just vignettes, and overall audience awareness for it is remarkably low (I completely forgot it was even coming out this summer, that’s how little it’s been pushing this film on us). Having seen the film, though, I can completely understand why Illumination finally decided to show a little bit of hubris on this one; it’s their worst movie to date, an episodic slog with zero humour, obnoxious characters, and a plot so insultingly thin it could apply as a contestant on America’s Next Top Model.

The movie is comprised of three separate storylines, which just barely all come together in the final act. The first sees Max the Yorkshire Terrier (Patton Oswalt, replacing Louis C.K) coming to grips with the fact that his owner is now married and has a little baby, and becoming more and more neurotic as he tries to protect the little one from harm; the second follows Gidget the Pomeranian (Jenny Slate) as she relies on the help of cat Chloe (Lake Bell) to learn how to be a cat herself so she can infiltrate a feline-ridden apartment to get Max’s favourite toy back; and the third sees Snowball the rabbit (Kevin Hart) don a superhero guise and team up with Daisy the Shih Tzu (Tiffany Haddish) to rescue a white tiger from captivity within an abusive circus.

This whole film feels like they just stuck together some plotlines from a rejected TV spin-off and tried to pass it off as one complete feature, similar to what Disney once did with some of their direct-to-video sequels, specifically the ones with lesser animation and a far more episodic structure than the originals. What I will give this movie over most of those Disney ones is that this one has significantly better animation – if nothing else, it is a nice-looking feature with visuals to match some of the other big-budget, but significantly better, animated movies you’ll likely see this summer – but in pretty much every other department this is a complete failure. As its own narrative it doesn’t work, because the focus is so all over the place that it’s hard to determine which of these three sub-plots should be designated as the primary one, and as a sequel it is significantly less ambitious than its predecessor, which I wasn’t even that big a fan of in the first place but at least it had more of a structure within itself. Characters will barely feel relevant – Eric Stonestreet’s Duke, who was a major player in the previous film, barely has anything to do here, and neither do ones played by Hannibal Buress, Bobby Moynihan, Dana Carvey and others – or have had their obnoxious levels dialled up to eleven, especially Kevin Hart’s character who screams every other one of his lines and quickly becomes extremely irritating. Even some of the newer players, including Harrison Ford in his very first voiceover role as farm dog Rooster, are totally wasted; there’s really no reason for this character to be played by someone like him other than to boast that they got him to be in this movie, as it’s a role that really could have been played by anyone and it wouldn’t have made a lot of difference.

It’s such a bad family film that it almost makes you want to apologise to other recent movies of the genre like Aladdin and A Dog’s Journey; those movies certainly had their fair share of problems, but at least they had a beginning, middle and end, unlike this movie which is so all over the place it’s borderline insulting. This is pure laziness on Illumination’s part, as they seem to think that they can just put out anything they want, regardless of whether it feels complete or not, because they know it will still make them tons of money; who knows, it probably will do really well at the box office despite its limited advertising, but regardless there are way better movies to check out instead of this one – for the love of God, go and see Rocketman instead of this, or Booksmart, or John Wick: Chapter 3 – Parabellum, or even some of the lesser releases out right now, because no matter what you may think of them I guarantee you’re going to have a far better time at those than with The Secret Life of Pets 2, which is made by people who think their audience really is that gullible for bland, unambitious family entertainment.

One other thing I do want to mention, is that the best and the worst parts of the film are during the end credits; it’s not really a spoiler to go into detail about them, because they don’t contribute anything to the “story” nor do they contain any real surprises. The best part is when it is simply showing live-action clips of children with their pets, and they are significantly funnier than anything that came before; however, it is followed immediately by one of the most embarrassing mid-credit sequences I’ve seen in ages, involving Kevin Hart’s character and the song “Panda” by Desiigner – it is beyond painful to watch, as it just screams of studio interference as a last-minute attempt to connect with the cool kids.

In fact, thinking about how awful the rest of the film is, it’s probably a perfect place for them to stop.

The Secret Life of Pets 2 is an awful animated sequel that feels like a string of episodes loosely stitched together from a rejected TV show, and because of that it’s extremely unfocused and contains such bland writing that it makes you want to apologise to other bad family movies recently.

Check out The Secret Life of Pets 2 showtimes in London
on Walloh.