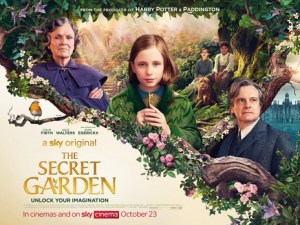 BASICALLY…: Young orphan Mary (Egerickx) discovers a magical garden on the estate of her uncle (Firth)…

One of the most inoffensive children’s books of all time, The Secret Garden by Frances Hodgson Burnett is one of those stories that you can picture being read to you during tea-time on a summer’s evening in a public park. Easily accessible to children, as well as adults who have vague memories of reading it as children, it’s a book which pleasantly goes in one ear and out the other, with no cause for alarm whatsoever.

The latest feature adaptation, brought to us by director Marc Munden and producer David Heyman – the former being no stranger to family flicks since he’s best known for the Harry Potter and Paddington films – sticks to the inoffensiveness of the story, but while it’s all pleasant and colourful, you’ll wish that there would have been a bit more to discover.

As in the book, the film centres on Mary (Dixie Egerickx), a young girl in 1947 who, after losing both her parents in India, is sent back to England to live with her uncle Lord Archibald Craven (Colin Firth), on his Misselthwaite Manor estate in Yorkshire. Initially unruly towards the house’s staff and its housekeeper Mrs. Medlock (Julie Walters), she soon discovers a magical (sort of – more on that in a bit) garden hidden behind walls of ivy, filled with tons of beautiful flowers and plant life. She also befriends Lord Craven’s sickly, bed-bound son Colin (Edan Hayhurst), and local boy Dickon (Amir Wilson) whose sister Martha (Isis Davis) works as a maid at the manor, and together they bask in the garden’s beauty, learning more about its origins while also dealing with their own levels of grief.

It’s essentially what you’d think a film adaptation of The Secret Garden would be; cutesy and sweet, easy to swallow, and extremely harmless. Younger audiences, who might never have read the original book, will respond to it just fine for there is a certain charm that certainly appeals to that age group, while adults can tolerate it just enough for the sake of their sprogs. However, the film doesn’t really attempt to stretch itself beyond just being an adaptation that ticks all the boxes; the story largely plays out like it does in the source material, with the addition of a few extra sequences that are only there to add stakes to a story that otherwise has very few, and the characters are written just like how they were originally, for better or worse (Mary starts off as an obnoxious spoiled child and only slightly lowers her guard over the course of the movie, which doesn’t make her the easiest protagonist to warm to). Director Marc Munden clearly tries to inject some whimsical style into the film, incorporating ghostly flashback figures into scenes and so on, but Jack Thorne’s script sticks largely to the source which it does fine, but never pushes itself to expand on its themes or characters or even, crucially, the nature of the garden itself.

This is where the fantastical element of the film comes in, and it kind of threw me off when it became apparent that this was what they were doing. Several scenes in the garden show the flowers and plant life seemingly taking on a life of their own, growing at will and even helping characters out at certain moments, which is implied to be in the imagination of its young protagonists (that theory goes along nicely with how she can also see wallpaper doves come to life, or visions of her mother and aunt running about the halls of the manor) but in terms of making the story more digestible for its younger audience it feels a little forced. It comes across as though the fantasy is only there because, let’s face it, gardens on their own are kind of boring, and to avoid just simply having it as a beautiful colour palette of flowers and wildlife, they made it seem as though the characters wandered into Narnia or Wonderland instead. However, that doesn’t change the fact that the garden is still, well, a garden, and no amount of whimsical CGI that shows the flowers reacting to the joyous or sad moments happening to the characters (you should see how they wither away after an emotional scene, in a very unsubtle moment) can change that. It’s understandable why they’d want to play up the magic of it all, but ultimately it adds very little to a story which never really needed that in the first place.

Though it may be toothless (but then again, so is the original book), this version of The Secret Garden does have some bright spots. It is a very colourful movie to look at, with the bright textures of not just the garden’s flowers but the characters’ clothes and hidden rooms in the manor all popping out with gorgeous effect, and splendid design. The acting too is decent enough, with young lead Dixie Egerickx just about holding her own against the likes of Colin Firth and Julie Walters (both of whom are fine as well), and Dario Marianelli’s score also lightens the mood on more than one occasion. Also, it bears repeating that the younger target audience will perhaps be more into it than the older crowd probably will; the whimsical tone, the simplistic plot and characters, and the easily understandable messages are all things that children can absorb just fine without fear of taking anything out of context, resulting in a harmless film that’s perfectly suitable for that young age bracket.

Maybe it’s just selfish to wish that a children’s story that’s over a hundred years old would contain a bit more of an edge, but if there’s anything that this version of The Secret Garden proves, it’s that there is still an audience for this kind of inoffensive material, even if it’s not exactly to other people’s liking.

The Secret Garden largely retains the original story in all its inoffensive light, which on the one hand makes it easily palatable for younger audiences, but on the other ensures that it lacks a certain weight and even magic for older viewers.

The Secret Garden is out now in cinemas across the UK, and is also showing on Sky Cinema.