The Roads Not Taken (Review)

The Roads Not Taken (Review) 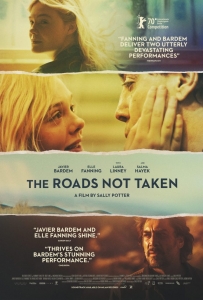 BASICALLY…: Over the course of a day, dementia-ridden Leo (Bardem) and his daughter Molly (Fanning) experience a meaningful journey through New York together…

British filmmaker Sally Potter is nothing if not a visionary; she clearly have creativity to spare, whether it’s her bold adaptation of Virginia Woolf’s Orlando or a romance spoken entirely in iambic pentameter, and more recently her black-and-white farce The Party contained many themes from infidelity to mortality to spirituality… all in just barely over an hour’s running time.

Her latest film, The Roads Not Taken, represents Potter at a new phase in her ambitious directorial vision, where she tackles multiple non-linear storylines within the context of a much more contained singular narrative, which so far has sharply divided critics, much like a handful of her other works. In a sense, there is a good deal to admire about this film, from the fantastic performances to some truly heart-breaking portrayals of dementia from people who clearly did their research (Potter’s brother tragically suffered from Pick’s disease, itself a type of dementia), but it’s also hard to ignore the film’s blatant narrative flaws. Whatever you make of it, though, there’s no denying that it’s at least an interesting film to experience.

The film mostly takes place during a day in the life of Mexican-born writer Leo (Javier Bardem); he has come down with a very severe case of dementia, to a point where he cannot do basic tasks like getting out of bed or washing himself without someone there to help him. On this particular day, Leo’s grown daughter Molly (Elle Fanning, here reuniting with Potter after their previous collaboration Ginger & Rosa) has taken time out of her hectic work schedule to take her father to the dentist and optometrist, a seemingly mundane outing which soon turns into a series of misadventures for the both of them as Molly faces one consequence after another of looking after a parent who clearly needs a lot more help than he’s currently getting. In Leo’s mind, however, it’s a different story; in fact, it’s two stories, as we see a couple of very different but vaguely connected events from his past, including experiencing a tragedy with his former love Dolores (Salma Hayek) back in Mexico, and striking up a conversation with a sympathetic young woman (Milena Tscharntke) whilst on a Greek island, around when Molly was still an infant. These are, as it transpires, the titular roads he had failed to trail down, and even in his fragmented current state is regretful of his questionable life choices.

As you may have already pieced together, the movie takes a very fragmented approach to telling this guy’s life story; the flashbacks are spaced periodically throughout the main plotline, with some shots – stunningly captured by cinematographer Robbie Ryan – even syncing up almost exactly with where we leave off in the past. There are pros and cons to Potter’s stylistic choice here; on the one hand, it helps to unfold a much larger portrait of the Leo character that’s a bit more layered than how we first meet him in the present, something which is admirably not given to us all at once; but on the other hand, it sends the primary focus of the movie into a tailspin, because its constant cuts back and forth make it difficult to focus on the primary, and honestly more interesting, narrative which follows both Bardem and Fanning in a much more compelling dynamic than the episodic flashbacks we are given. The flashbacks themselves range from heavy melodrama to oddly obsessive, and individually there’s nothing technically wrong with them, but spliced into a movie that’s already dealing with some heavy material, it can feel like emotional overkill at times.

While it can be narratively frustrating at times, one thing you can’t take away from it is how effective it can be once it’s in its element. Dementia has been portrayed many ways in film, from the devastating blow of films like Still Alice and Away From Her, to the WTF-crazed horrendousness of Head Full of Honey, and here the combination of both Potter’s sensitive writing and direction, and a deeply committed turn by Javier Bardem, gives you a deeply devastating portrayal of the disease in as realistic a fashion as it possibly can, particularly from the perspective of those having to deal with him in his current state. Bearing the brunt of it all is Molly, played exceptionally by Elle Fanning, who puts on a cheery disposition for the sake of her father’s deteriorating health, which also seems like a lie she is telling herself when it becomes apparent that his condition is a lot harder to manage than she thinks. Forced to take responsibility for her father’s confused misdemeanours – at one point, he steals a dog which reminds him of his own deceased pet – and also bearing witness to inconsiderate insults hurled his way, including from her own cold-hearted mother (Laura Linney in an all-too-brief role), the character represents a growing frustration yet heartfelt dedication that many carers of dementia-ridden parents or patients can all too easily sympathise with, and again both Potter’s filmmaking and Fanning’s fantastic turn make you feel her increasing hopelessness when it comes to looking after someone she clearly loves with all her heart.

The movie is flawed, often irritatingly so, but when it works, it really does work. As long as you’re okay with one or two detours now and then, you’ll get a heart-breaking film that sensitively tackles a heavy subject with as much emotional insight as it can dish out.

The Roads Not Taken is an ambitious, but flawed, depiction of dementia that certainly gives it a heart-breaking quality when the movie finds its groove – particularly in the compelling central storyline which features two incredible turns by both Javier Bardem and Elle Fanning – but its fragmented approach can leave you frustrated when the stories in those narratives are less interesting than the one we should be primarily focusing on.

Want to decide what the movie’s like for yourself?
Check out The Roads Not Taken showtimes in London
via