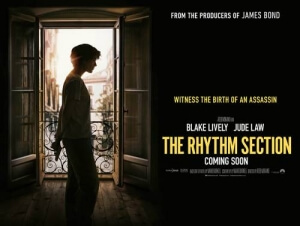 BASICALLY…: When she discover that the place crash which killed her family wasn’t an accident, Stephanie Patrick (Lively) seeks revenge against the people that orchestrated it…

You can tell that the makers of The Rhythm Section clearly wanted this to be a new 007-style franchise, not just because it involves high-end espionage in exotic worldwide locations with main characters that have lethal skills, but also because it is actually produced by Bond producers Michael G. Wilson and Barbara Broccoli.

However, if you want something that truly captures the feel and excitement of a James Bond picture, just wait a couple of months until No Time To Die comes out, because I guarantee that the actual Bond film is going to be a hell of a lot more interesting and engaging than this lame knock-off.

In the film, adapted by Mark Burnell from his own book of the same title, a woman named Stephanie Patrick (Blake Lively), devastated after losing her entire family in a plane crash, has succumbed to heroin addiction and prostitution. A chance encounter with a reporter leads her to discover that it might not have been an accident after all, and that those responsible are still walking free; after being trained by a former MI6 agent (Jude Law), she assumes the identity of an assassin and sets out to bring justice to the orchestrators of the attack.

That brief summary, by the way, gets to the point far quicker than the film itself does. It is such a slowly paced movie that by the time Lively’s character gets to train with Jude Law, you already feel like you’ve sat through half of the film, only to be dismayed that there’s still plenty of empty plot to go. Nothing happens for a good portion of this movie, so by the time something actually does move things forward you’ve completely run out of reasons to care about the characters or the situation, because there’s been nothing to draw you in up to that point. You’re left watching a pretty lifeless attempt to mine the success of not just Bond but also the Jason Bourne movies, which fails to work as its own thing because not only are you constantly being reminded of those better films but also there is nearly nothing for you to latch on to here that could differentiate it from the many other films like it. Part of that problem comes from the lacklustre script, which is another unfortunate example of an author adapting their own work without seemingly being able to tell the difference between a visual-based movie script and a more descriptive novel, and also from Reed Morano’s muted direction which doesn’t spark any of this plot to life, even in an enjoyable sense.

Another big chunk of why this movie doesn’t work is, unfortunately, the casting. Blake Lively is a very good actress, and in some of her recent films has been the shining highlight, but while you can definitely tell she is at least trying here she is playing a character who you increasingly have little sympathy for, because she makes so many dumb mistakes that end up making the situation a whole lot worse than it ever needed to be. Half the time, you don’t even know why she is being trained to carry out some of these missions, because Jude Law’s MI6 character is already right there and still in good enough shape to pull them off, so why he expects Lively to do all the work when she’s barely ever held a gun up until this point is one of many contrivances that the script has somehow allowed to slip through into the final product. There’s nothing to her character outside of her fumbling, nor is there much to anyone else whether it be Law’s gruff-and-that’s-it trainer or Sterling K. Brown as a former CIA operative who now trades on the open market for, erm, reasons. None of the actors even come alive during the all-too-few action sequences there are in this film, including a memorable one-shot car chase that takes place entirely within Lively’s vehicle, because they are given extremely thin characters to play that neither feel multi-dimensional nor earn enough of your sympathy to care whatsoever about them. It’s unfortunate that all of these good actors are stuck in something like this, because they all deserve far better than the lousy material that they’ve been given, and cannot help but feel stranded without a decent script to hold onto.

The fact that it’s now being released in January, following a late move from November of last year (itself moved from the summer to accommodate Lively’s on-set injury), followed by marketing that arrived all too late for this film, should have been all the red flags necessary to signal that this movie was going to suck, yet the film continued to surprise by being far lamer than anyone could have predicted. If this movie had a better script, and was supervised by a director who could inject a much faster pace and lighter tone into the works, then it could have maybe passed as something which would have been mediocre at worst. Unfortunately, what we’ve got is akin to the many failed franchise launchers made after the likes of The Bourne Identity and the Daniel Craig Bond films became huge successes, only this one was made by people who were actually involved with the making of Bond films, making it an even stranger knock-off that perhaps hits a little closer to home.

Like I said, you’d be better off waiting for No Time To Die to be released, because then at least you’ll be in for an action-packed treat, which is far more than one can say about this rhythmless mess.

The Rhythm Section fails to achieve the successes that its main Bond and Bourne influences experienced, because this is a far lamer attempt to ape their style than most may realise due to lame writing, muted direction, and performances by actors who are utterly let down by the weak material that they have been given.

Want to decide what the movie’s like for yourself?
Check out The Rhythm Section showtimes in London
via