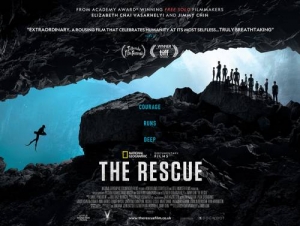 BASICALLY…: When a youth football team is trapped in the Tham Luang cave, a perilous rescue mission is put into motion…

Remember when the news was dominated by stories that had nothing to do with viruses or politics? Me neither, but one top story in 2018 came close to being the one life-affirming thing we needed in our lives: that, of course, being the rescue of 12 young boys and their guardian from a slowly-flooding cave in Thailand, which drew an international response team and a worldwide audience captivated by the all-but-impossible mission.

It was a story which proved that no matter where we hail from, we can all come together for a noble cause, and that’s exactly what the new documentary The Rescue places its focus on, making for a thrilling slice of real-life drama that will get you captivated by the story all over again.

The film is directed by Jimmy Chin and Elizabeth Chai Vasarhelyi, the filmmaking duo who won an Oscar for their equally-intense climbing documentary Free Solo, and charts the 18-day mission to save the group of young football players and their adult coach when they become trapped in the Tham Luang caves in Northern Thailand, by the rapid rainfall brought by the earlier-than-expected monsoon season. Practically everyone from the Thai Navy SEALs to British divers John Volanthen and Rick Stanton are brought in to find a way to locate the boys, who by this point are unlikely to have even survived after days trapped in the caves, and then somehow extract each and every one of them back to the surface. Interviews with the divers, members of the Thai armed forces, and bereaved spouses of those who sadly lost their lives during the mission, all give in-depth accounts of how the rescue mission was eventually planned out, and how – against all odds – the boys would live to see another day.

Between Free Solo and now The Rescue, directors Chin and Vasarhelyi have a true knack for taking true stories such as this and giving them the full epic blockbuster treatment, even within the documentary format. The heroic international story of the Tham Luang rescue is absolutely one that screams “big-screen” – unsurprisingly, a more dramatized movie is currently in the works from director Ron Howard – and the two directors manage to combine archive footage captured during the event itself, dramatic re-enactments and talking-head interviews to tell the story with the intensity and hard-hitting feel-good drama of a typical scripted film. You find yourself thoroughly engaged in the development of methods which would ultimately be used for the rescue mission, with interviewees discussing the complicated ethics behind certain practises (when the concept of anaesthetising the children during their long underwater trek is introduced, chief medical advisor Richard Harris pretty much makes it clear as to why that is perhaps the worst thing you could do in that situation), and raw footage showing the intricate workmanship put into ensuring that every step would be taken as accurately as possible.

It makes things all the more palpitating when we see the divers eventually find the trapped boys, with the globe-spanning footage (accompanied by re-enacted moments) of them in reasonably good spirits shown almost in its entirety, as a neat reward for sticking through such uncertainty like the divers themselves were going through. The movie handles it like a truly life-affirming moment, albeit with some corniness (the movie’s end-credits song, based on what the divers’ reaction to finding the boys, is a ridiculously cheesy anthem where they just repeat the word “believe” over and over again), and from there you are simply hooked as to how the international team outside is going to pull off their daring mission. It’s made more risky as we see that the deep, dark waters of the cave claim the life of a retired SEAL who stepped in to help – which, despite the tragedy, isn’t so shocking to those unfamiliar with this part because here he’s portrayed in a way that might as well have included the phrase “two days away from retirement” – and then, during the rescue mission itself, the dangers that befall the divers and their unconscious young wards.

It’s captivating stuff, and while it perhaps lacks the true thrills that Free Solo was able to naturally deliver, The Rescue is a solid follow-up from these directors, who take a compelling true story and turn it into an intense but ultimately hopeful documentary that shows the true human spirit without borders. At the very least, it’ll do until Ron Howard’s movie comes along.

The Rescue is a captivating real-life account of the rescue mission into the flooding Thailand caves to save a group of young boys, which is framed as an intense thriller within its documentary format, and manages to deliver some thrilling and ultimately endearing suspense.

The Rescue will be released in cinemas nationwide on Friday 29th October 2021 – click here to find a screening near you!