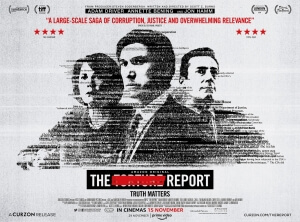 It’s relatively accepted nowadays that the CIA’s use of torture to interrogate suspected terrorists in the wake of 9/11 was an immoral and logistic embarrassment, but spare a thought for the small amount of people who spent years investigating it so that as many details about it as possible could be brought to the public’s attention.

With his film The Report, writer-director Scott Z. Burns certainly asks you to think of at least one guy who really threw himself into the investigation. Daniel J. Jones, the Senate investigator who oversaw the research and findings that eventually made its ways into the 6,000+ page “Torture Report”, might not be as prolific in American politics as others, but his work deserves as much respect as any decent politician out there, and this film sheds great light on the systematic but important process which he undertook.

The film follows Jones (Adam Driver) over the course of a number of years, from when he first applies for a job in politics in 2003, to when some years later he is recruited by Senator Dianne Feinstein (Annette Bening) to begin investigating the CIA’s role in introducing brutal interrogation techniques such as waterboarding during the War on Terror. Once he buries his head into his work, he begins to uncover many secrets that the CIA kept hidden about the program, some of which they even withheld from both Presidents George W. Bush and Barack Obama at the time, all the while fending off unwanted intervention from the CIA as he continues doing his job.

It is a complex topic on display here, one that if handled poorly could have undermined all the hard work that Jones put in to making the report a reality for the sake of a Hollywood narrative. However, The Report doesn’t settle for Hollywood, instead putting a firm focus on the numerous and damaging details that come to light about the controversial use of torture by the CIA, with long scenes dedicated to characters just swapping information with each other, in ways that make it feel heavily researched but not completely inhuman either. Much like Spotlight, the drama is in the exposition; as you both see and hear more about the CIA’s ruthless tactics to both secure information from terror suspects and also cover their tracks so that people like Jones can’t catch up with them, it leaves you mortified that certain figures were willing to put their own reputations before the lives of their detainees, some of whom even died under their watch due to things like hypothermia, and yet they not only kept their jobs at the end of the day but even moved higher up in power afterwards. Burns takes a cue from his regular collaborator Steven Soderbergh – who serves as a producer on the film – by having all the details spill out in a very matter-of-fact manner, with the end result feeling a lot like you were reading a 6,000+ page government document that concentrated more on the facts than anything else, but it is to Burns’ credit that it doesn’t become too tedious to hear one expository dialogue scene after another, and to Adam Driver’s credit as a compelling performer that his character – thin though it may seem on paper – keeps you hooked on every new titbit that comes through.

There are times, though, when the movie struggles to contain the sheer weight of the topic it is investigating. The first few minutes suggest a non-linear narrative – it starts off with a scene that takes place much later in the movie, before frequently cutting from one year to the next – which at first throws you off because you’re not entirely sure if the whole film is going to be like this or if it’s just this section. It does eventually find its footing, but those first crucial moments don’t exactly ease you into the situation as well as it had hoped. Because it is also a lot of information to take in all at once, it does leave you a little disorientated and at times you even struggle to catch up with all of the political jargon and serious developments. It is undoubtedly a movie made for people with a high intelligence and firm attention span, but not every audience member is going to be on the same wavelength as these people so it will certainly be difficult for some people to follow along (I certainly know that I struggled, no matter how hard my attempts to follow everything were).

Although this movie isn’t quite as engrossing as other investigative dramas such as Spotlight or All The President’s Men, it is a deeply factual look at an extremely complicated process that would document a crucial moment in modern American history, and if nothing else it deserves respect for keeping its values close to its chest and going all in with making the process as thrilling as it can within its own limitations. The amount of time and effort that Jones put into drafting a document that the vast majority of people will likely never even read is staggering, as you will undoubtedly feel after you’ve taken in more factual information than your head can possibly contain, but you will at least feel nothing but gratitude for seeing the light shine on someone who might not be a household name, but did far more for modern politics than anyone would care to admit.

The Report details the lengthy time and effort that went into drafting the “Torture Report” in vigorous and often overwhelming detail, but a mostly sharp focus by writer-director Scott Z. Burns and a committed turn by Adam Driver both leave you intrigued by the drama within the exposition.

Want to decide what the movie’s like for yourself?
Check out The Report showtimes in London
via