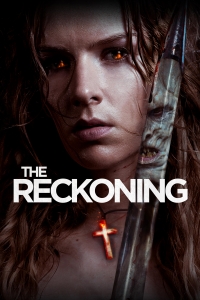 BASICALLY…: A young widow (Kirk) seeks revenge after being falsely accused of being a witch…

What on Earth happened to Neil Marshall? Although his career started out strong with cult horror hits like Dog Soldiers and The Descent, the vast majority of his filmography since has been made up of forgettable duds such as Doomsday and ill-fated studio flicks like the Hellboy reboot; even though he’s found better success by directing episodes of Game of Thrones and Westworld, his feature credits have not been able to match his earlier successes, and the same goes for his latest film The Reckoning, which once again represents a shocking decline in quality for the filmmaker.

Marshall’s torrid, unpleasant, and surprisingly boring medieval thriller, which acts as a Trojan horse for a torture porn flick rife with questionable gender politics and mind-numbingly awful dialogue, is also the work of lead actress and co-writer Charlotte Kirk, whom the filmmaker is currently engaged to, and who apparently has no problem being the subject of her fiancée’s increasingly disturbed methods of on-screen torture. In fact, she appears to be all too willing, for this is much more of a thinly-disguised vanity project for Kirk to try and show the world how much she’s worth as an actress, except she put herself in the most cloying and unflattering narrative she could have possible come up with.

Kirk plays Grace, a young woman in 17th century England, which was a time of fear and paranoia as the Great Plague sweeps across Europe and causes the blame to be placed on the Devil and his minions, which leads to lots of innocent women being accused of witches and tortured before burning alive. Grace’s husband has just hanged himself after contracting the disease, leaving her and their infant daughter Abigail to fend for themselves against ruthless landlord Pendleton (Steven Waddington); after Grace rejects his violent advances in order to settle issues with rent, he quickly convinces everyone that she is a witch, and has her locked up and placed in the torturous hands of Witchfinder Moorcroft (Sean Pertwee).

What follows is a series of events so monotonous and unengaging that they could be considered a form of torture in and of themselves. Kirk’s Grace is subject to a lot of nasty violence throughout the movie, from being repeatedly whipped to being stabbed in several parts of her body, to eventually being violated by what can only be described as the most painful butt-plug ever conceived by human hands; however, instead of feeling earned in any way, it comes across as extremely gratuitous and even exploitative, because there’s ultimately little meaning or weight behind any of it. You are simply watching a woman have horrible things constantly happen to her and that’s it, with Marshall’s direction lending almost no thought to anything else substantial, whether it’s a consistent tone or even a sense of style. It’s a wholly unremarkable movie to watch, with the cinematography looking all too clean-cut for a film set in this dark time period and with this dour tone, and the overbearing orchestral score rendering any moment of subtlety without merit; the same goes for some very choppy editing which makes it seem all the more like we’re watching a rough cut instead of the final product.

Worst of all is a script which, beyond sticking too firmly to a generic revenge narrative, is riddled with dreadfully on-the-nose dialogue and paper-thin characters who rarely ever extend beyond their designated caricatures. Most of the supporting cast of villains and irate townsfolk are made up of bellowing, abusive braggarts whose only mission in life appears to be as cruel and vindictive as possible because that is what the script dictates, while other characters who could have potentially been rather interesting – such as a formerly persecuted woman who now serves as the Witchfinder’s loyal servant after going through the same torture process as our lead – are squandered by writing which barely gives them anything to do other than serve the bare mechanics of the plot. Even more alarming is how, despite an ultimate if rather cynical attempt to turn this story into one of female empowerment, it has a very misogynistic way of conducting its business; beyond what the female lead has to endure here, every other female character is being morbidly treated from physical abuse to being coldly shot at, yet the script fails to make us care for any of them because they are also written just as terribly as their male counterparts.

It is bizarre, though, that a film designed so specifically to be nothing more than an aggrandising calling card for its lead actress and co-writer could be so undigestible for audiences and eagle-eyed critics such as myself. The Reckoning is made for one person only, and that person is Charlotte Kirk; she is made out to be such an alluring presence here that even in scenes where she’s being bloodily tortured in medieval England, she still looks like a perfect ten, and it comes across as so unnaturally vain that it takes you completely out of the story it’s trying to tell. Other characters will also only exist to pay the character a compliment about how beautiful she is and to declare through horrible expository dialogue how kind and thoughtful she is. It’d be one thing if the overall performance was worth centring an entire movie around, but instead it is just bland, and she sadly lacks the screen presence or even the emotional range to carry a movie like this, with most of her impassioned monologues being delivered with the same dry monotone she uses for the rest of her dialogue.

I’m sure that under better direction and especially stronger writing (i.e. not her own or Neil Marshall’s), Charlotte Kirk can be decent enough to warrant a career in the screen. However, The Reckoning is such a rickety, unpleasant mess that it makes neither actress nor filmmaker look good, because it brings out seedy and self-indulgent qualities in both of them that give this already empty movie a vain and sadly exploitative feel that thinks it’s being way more artsy than it is. Hopefully, the next movie that Neil Marshall makes will put him back on track.

The Reckoning is an empty and ultimately self-indulgent vanity project for its star and co-writer Charlotte Kirk, whose ambition is brought down by her bland lead performance, and director Neil Marshall’s torrid and unpleasant filmmaking which makes neither of them look good in this light.

The Reckoning is now available to rent or buy on digital platforms, including Amazon Prime Video.