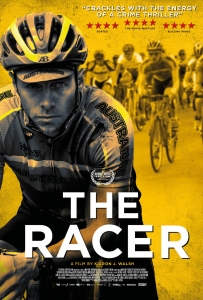 BASICALLY…: A cyclist (Talpe) is unceremoniously dropped from his team during the 1998 Tour De France, but fate soon gives him another chance…

The doping scandal in professional cycling was well established long before Lance Armstrong got caught up in it; case in point, the 1998 Tour de France was overshadowed by shocking revelations that numerous cyclists were routinely taking performance-enhancing drugs to boost their metabolism and strength, in order to win long stretches of the competition’s various stages.

While both the story and the characters in Kieron J. Walsh’s film The Racer are fictional, as specified in the opening text, the circumstances are clearly based on fact, and offer just one example of the vast doping programs spread throughout the entire industry. Unfortunately, none of it is really worth caring about here, because while the illegal practises are clearly on the film’s mind, it doesn’t offer any interesting characters or a compelling enough story to compliment the severity of the scandal.

Primarily set in Dublin, where the initial stages of the 1998 Tour de France are being held for the first time, the film follows a team of European cyclists called Austrange as they prepare to cycle their way to victory. Among them is Dominique Shabol (Louis Talpe), a support rider or “domestique” in his late 30s who’s facing an early retirement after years of training and dedication to the sport. The team is also one of the many that are using illegal drug-laced blood transfusions to enhance their performance, as supplied by the team’s masseur Sonny (Iain Glen), which sees racers like Dom become easily agitated, and subject to suddenly riding their bikes as a means to get their lowered heart rate up. For Dom, a turning point comes when he learns that his father has just passed away with his funeral just a week away, and between that and a blossoming fling between young doctor Lynn (Tara Lee) he begins to face a choice between staying in the game, or dropping everything for a more normal life.

Despite its heavy fixation on the doping angle of professional cycling at the time, the movie oddly seems indifferent to its presence. It’s certainly made clear a bunch of times that what this team is doing is extremely wrong, but at the same time no real lessons seem to be learned about their use of the illegal drugs, nor does anyone including our lead character appear to face any consequences over it. I suppose the point was to show how normalised this scandal had become in the cycling world, but there still needs to be more than just a slap on the wrist given to these people who are effectively cheating at what they do; it appears the script, co-written by Walsh and Ciaran Cassidy, is treating this major scandal as though it’s a mild hurdle for them to overcome, which feels somewhat misjudged in this story supposedly about the morality of these cyclists and their enablers.

If the laxed approach to a serious topic like doping seems like the film is otherwise focusing more on the characters and story, even then it comes up short. Although it is supposedly a character study about this support rider facing personal and professional challenges, the main character is demonstrably uninteresting; Louis Talpe gives a charisma-free turn that you could argue is on point for his character’s complete focus on the sport and nothing else, but it still renders him without much of a personality you can become drawn to, leaving nothing majorly substantial about this performance or the way he’s written to make you want to root for this guy. The only character who you’re actually interested to learn a little more about is Iain Glen, donning a Scottish accent as the team’s main drug supplier and a former cyclist with a past that’s far more interesting than the one we’re actually getting; almost everyone else is an obnoxious or unlikeable (sometimes both) caricature that you really have no desire to be around, let alone watch an entire movie about.

As for the story, it’s filled with the usual clichés you’d find in standard sports movies, from the overachieving main sportsman to the naïve newcomer eager to do things the proper clean way (i.e. with a blood stream as clean as a COVID ward in a hospital), leaving little room for genuine surprises or unexpected developments. The cycling scenes themselves have a bit of energy to them, but again you’re following characters who you really don’t care that much for, so any investment might have is minimal at the very best. There’s not that much to this movie that’s really worth recommending, because it’s a familiar story with paper-thin characters and an unnervingly indifferent attitude about its very serious subject matter, which had this been a much tighter film (with perhaps another few rewrites to work on the narrative and character development) might actually have had something profound to say about it, rather than just showing it and not acknowledging it much from then on.

You would honestly get more excitement out of watching old footage of the 1998 Tour de France, or from learning more about the growing doping scandal that blossomed from it; at least then, you would get something interesting and a little more original.

The Racer hits the brakes on developing a profound story with interesting characters and a heavy focus on the doping scandal that rocked the 1998 Tour de France, offering none of that and instead wasting its potential on tired sports movie clichés, unlikeable characters, and an alarmingly indifferent attitude to its primary subject matter.

The Racer is out now on digital and in cinemas across the UK.