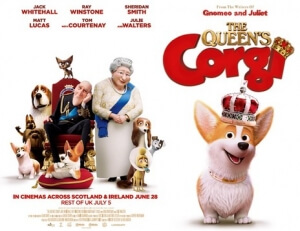 BASICALLY…: Rex (Whitehall), a corgi that belongs to Queen Elizabeth II (Walters), gets lost and must find his way back to Buckingham Palace…

The first five or so minutes of The Queen’s Corgi are honestly not bad – told with absolutely zero dialogue and relying heavily on the animation to tell the story of a little corgi being raised in Buckingham Palace, it’s rather nice and sweetly done, almost to a point to where you wonder if it could actually work, should they continue down this path.

And then, Donald Trump shows up.

No word of a lie (and if you don’t believe me, he’s right there in the trailer), the current US President does actually appear as a character in this animated kid’s movie, as does his wife Melania, and their own pet dog who spends the entire first act trying to sexually assault the lead character, after being instructed by her owner to “grab ‘em by the puppy”. That is an actual thing said in this movie, like the filmmakers – from Belgian animation studio nWave Pictures, who previously brought us Fly Me To The Moon, A Turtle’s Tale and Robinson Crusoe (known as The Wild Life in the States) – heard that damning audio from the person that now occupies the White House, and thought to themselves “That would be perfect for our cute and cuddly animated film about one of the Queen’s dogs.”

Needless to say, when Trump comes into the picture, that’s when everything starts going downhill, and fast. Beyond the fact that Trump’s very presence in this movie designed for little children is alarming to say the least, this movie is astonishingly awful, from the generic story to the paper-thin characters to its lowest common denominator sense of humour that would make even Paddington embarrassed to be British. The world is already laughing at us because of the whole Brexit shambles, so imagine what would happen when they see a film like this that’s filled with British iconography and starring the iconic breed of choice for Queen Elizabeth II, and includes scenes of dogs initiating their own Fight Club, hints at domestic violence and drug use, and includes cold-blooded attempts at murder. Again, all of these things actually happen in this.

What you need to know about the story – aside from Trump featuring heavily in the first act – is that one of the Queen’s corgis, named Rex (voiced by Jack Whitehall in this UK dub which we’ll get to later), is the “top dog” for HRH, but after an incident that involves Trump’s genitals – yes, you read that right – whilst avoiding the affections of the President’s Pepé Le Pew-esque dog (on a side note, the fact that Trump’s dog would act in such a sexually perverse manner with seriously predatory vibes is the only thing that makes sense in this movie), he’s shunned by his owner. After being tricked by another corgi (Matt Lucas) into running away from the Palace, Rex ends up in a dog shelter that’s ruled by the evil pit bull terrier Tyson (Ray Winstone), who – like I said – runs a dog Fight Club in the shelter’s basement. You can figure out most other things from there, from the fact that he has to escape and make it back to the Palace, he meets new friends along the way, he learns the meaning of friendship or something, you get it.

Honestly, the very generic plot – and it is extraordinarily generic, even for a film designed for young children – is one of the least notable things about this film, especially when you compare it to the rest of the utter insanity on display here. First of all, let’s talk about how the characters are so flimsily written that they can alter their personalities at the drop of a hat. For instance, the love interest in this film, who’s voiced by Sheridan Smith in this version, is at first set up to be this kind of gold-digger character once she discovers Rex’s Palace-based origin, but that thread is almost immediately cut and she just becomes the stock love interest type for the rest of the film, like she just suddenly stopped dreaming about the life of luxury her potential new mate can give her. Other characters go through this loop too, like a couple of inmates at this dog shelter (stop me if this sounds familiar: a pound that’s made to feel and look like a prison… I’m going to assume you just stopped me) who are given backstories such as being a sniffer dog (that’s where the drug use joke comes in, by the way) and one that was apparently an actor, but everything that’s been built up about them never once comes into play, and they just suddenly become glorified background characters with no personality outside of dropping random one-liners and providing useless commentary. Rex, too, is hard to root for because he’s that awkward mix of pompous and stupid that just makes you want to yell at him for continuing to make one bad decision after another, and Jack Whitehall’s vocal performance in this particular dub is so disinterested that it comes across more that this dog, who’s at the centre of all this chaos, could not give a stuff about anything he’s witnessing.

Since this was originally a Belgian production, it was dubbed into English using mostly British performers, but it’s that kind of dubbing that’s so noticeably off that you can spot the voices failing to sync up with the animation, and it becomes very distracting as you start to see more and more just how these mouths are not at all matching what’s actually coming out of them. Like Whitehall, most of the voice cast they got for this dub, including actors like Ray Winstone, Tom Courtenay, Matt Lucas and Sheridan Smith, don’t at all feel engaged in this material, and it can result in half-assed delivery on their part, to match the alarmingly robotic movements of these animals, in due part to the low-budgeted animation which isn’t the worst – if you were to look at a still shot of this movie, you can definitely see the textures in the fur spring out at you – but in motion, it’s very awkward to watch because it’s like they’re all machines that have been programmed to walk, talk and haunt your nightmares.

Then again, only robots could come up with the horrific humour that this movie thinks is passable in today’s climate. There is a joke in this movie set in the pound, when potential new owners are coming to look at the dogs, and Rex sees from the window someone wearing a pink hat, who he thinks is the Queen. As it turns out, the person is a bearded man wearing the hat as well as bright pink dress, to whom Rex scoffs because he thought it was the Queen, at which point his cellmate responds with something along the lines of “I think he is”. You’d expect that sort of gay joke in a movie from twenty years ago, and not this 2019-released movie that’s made for very young audiences, which makes it all the more worrying. And, of course, there’s that “grab ‘em by the puppy” joke I mentioned earlier, which doesn’t make grammatical sense anyway but when it’s clearly inspired by a leaked audio of the current President of the United States bragging about sexual assault, it’s just kind of gross that they’d even think about putting that in to something that’s, again, made exclusively for young kids. The rest of the jokes are made up of awkward slapstick, poop and pee jokes, pop culture references that would be dated even if this film came out five years prior (which begs the question, when was this movie written, because they mention The Hunger Games at one point as well as Rocky and Fight Club, both of which are movies that 5-9 year olds have definitely not watched), and things which feel so lazy and cynically constructed that it makes its target audience feel like a bunch of little idiots.

But going back to the plot briefly, as I already mentioned the only thing that makes sense is that Trump’s dog (were he to actually have one, which obviously he doesn’t) is just as much of a sexual predator as its owner. Buckingham Palace, one of the most heavily-guarded places in the country, if not the world, is shockingly easy for anyone to just slip into, right under the guards’ noses in fact; there are multiple scenes where dogs can just come and go as they please, as the incompetent guards (and yes, they’re dressed in the traditional red uniform and large hat) run up and down trying to search for them, and during the film’s climax there is a massive fire within the building itself which absolutely nobody except this pack of dogs knows is paying any attention to. I know it’s weird to harp on things like this in a movie that wasn’t designed for me, but this is all so horribly put together that it deserves to be called out for its complete disregard for the intelligence of its audience, especially when they’re as young as what they’re picturing.

I’m probably forgetting tons more details about this movie, and I know for a fact that once this review is finished I’ll think of something else to say about it, but I think this should probably be enough evidence to prove to you that The Queen’s Corgi is a rotten waste of space that should be left out in the dog house, and that’s even before Trump shows up to tell his dog to “grab ‘em by the puppy.”

The Queen’s Corgi is an embarrassingly awful animated movie that not only feels very cheap and unambitious, with robotic animation and some disinterested voice acting, but features some appallingly misguided and inappropriate humour as well as thin characters and a plot that treats the audience like morons. Put it down.

Check out The Queen’s Corgi showtimes in London
on Walloh.