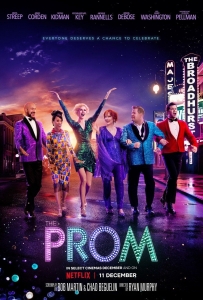 BASICALLY…: A group of self-absorbed actors (Streep, Corden, Kidman and Rannells) show support for a teen girl (Pellman) who’s been forbidden from bringing her girlfriend to her school prom…

Netflix seems to really have doubled down on its musicals recently, with Jingle Jangle: A Christmas Journey and that recent Dolly Parton Christmas special leaving a mark on audiences desperate for the full Broadway-to-film experience, especially when both theatres and cinemas are crippled by the ongoing pandemic. The streaming service has also taken great advantage of their new deal with Ryan Murphy, who has created shows and mini-series like The Politician, Hollywood and Ratched for the company since his move from television studio FX two years ago.

For its most fitting experiment yet, Netflix now combines its growing musical catalogue with the guy who created Glee and Pose for a movie musical so full of joy, energy and fun that I would seriously be shocked if it doesn’t do The Greatest Showman-style business with audiences.

Based on the 2018 Broadway musical of the same name, The Prom – as directed by Murphy – introduces us to a group of rather narcissistic actors in New York; there’s Dee Dee Allen (Meryl Streep) and Barry Glickman (James Corden), whose new musical about Eleanor Roosevelt has just received career-ending reviews, long-time chorus girl Angie Dickinson (Nicole Kidman) who’s still waiting for her big break, and unemployed sitcom star Trent Oliver (Andrew Rannells). Eager to boost their sullied image, they decide to find a cause to rally behind in order to be seen as caring people; they quickly find one in the case of Emma Nolan (Jo Ellen Pellman), a gay high school girl in Indiana whose request to bring her girlfriend Alyssa (Ariana DeBose) to the prom has been blocked by the town’s conservative PTA – fronted by a venomous Kerry Washington, as Alyssa’s mother – who have cancelled the event outright. The actors head to Indiana to try and change things (or, at least, be seen trying to change things), but soon discover how sensitive an issue it really is for Emma, and as they bond with her they slowly start to appreciate things other than themselves, from a romance with the school’s supportive principal (Keegan-Michael Key) who also happens to be a huge fan of both Broadway and Dee Dee Allen, to confronting the people they left behind on their initial road to stardom.

It has everything most lovers of movie musicals want to see: big show-stopping numbers, heavily choreographed dancing, exaggerated but likeable characters, and a sweet story at the centre of it all. Murphy brings those elements and more to life with the energy of a squirrel on cocaine, refusing to tone itself down from its first big tune onwards. Admittedly, it can get exhausting with one major set-piece after another, but Murphy consistently makes each and every scene feel fun and joyful enough that you’re never, ever bored. He gives a number of songs the same amount of pizzazz as they would have if performed live on stage, complete with highly intricate choreography that’s proud to be as flamboyant and over-the-top as it is. Even some of the quieter, gentler songs go all in on the theatricality, in what is overall a hugely entertaining experience where every single person involved looks as though they are having the time of their lives.

A hugely fun ensemble is key to this movie working as well as it does, from Meryl Streep who has remarkably stepped up her game in the singing department (her high-spirited performance of the track “It’s Not About Me” is a highlight), to young standout Jo Ellen Pellman who not only has quite the stunning voice but also the charm and charisma of a young classic movie star. As for James Corden, whose performance in this movie is already being labelled by some as an offensive and backwards gay stereotype – in a movie that is ironically about promoting inclusiveness and equality for all – he is honestly very good here, funny and gleeful but also a fairly well-rounded character with some strong emotional scenes. The whole hate for James Corden in this movie comes across more like an excuse to bad-mouth the guy personally over anything else, because he’s an easy scapegoat to place the blame on when a certain film underperforms (Cats, anyone?), and some people find him annoying enough to immediately spark a backlash against him, regardless of how good or bad his actual performance is. Personally, I thought he did well in this film; he was no less entertaining that everyone else, who again are just having such a joyful time making this that it’s hard to hate any of them.

The film is sweet and big-hearted, with positive messages of inclusivity and being a generally good person, and the songs are catchy and bountiful enough to get your feet tapping along with them. Whether or not you get exhausted by the sheer quantity of big tunes and excessive choreography perhaps depends on your appetite for musicals in general (I certainly felt a little overwhelmed in parts, although not too often), but there is lots of joy, happiness and entertainment to mine from this movie, whether it’s in the music or the performances or Murphy’s highly energetic direction, all of which are guaranteed to leave a good smile on your face.

And by God, after the year we’ve had, we deserve a bit of joy in our lives right now.

The Prom is an endlessly fun movie musical that director Ryan Murphy, and a hugely entertaining ensemble of actors from Meryl Streep to young standout Jo Ellen Pellman to – yes – James Corden, inject so much joyful energy into that it’s hard for anyone with a beating heart to resist, as exhausting as some of it can be.

The Prom is out now in select cinemas across the UK, and will be available on Netflix from Friday 11th December 2020.