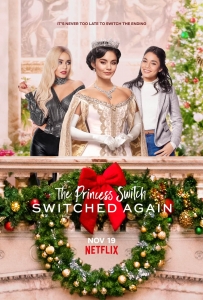 BASICALLY…: Duchess Margaret (Hudgens) and her lookalike Stacy (also Hudgens) must trade places again to sort out each other’s lives…

There’s a very good reason why I didn’t review the surprise Netflix hit The Princess Switch back in 2018: it’s because I didn’t really want to.

Back then, it just seemed like yet another one of those cheesy Christmas movies you’d normally find on the Hallmark or Lifetime channels around this time of year, like the generically titled A Christmas Kiss, A Christmas Prince, A Wish for Christmas, Marry Me at Christmas, and even A Shoe Addict’s Christmas (there doesn’t appear to be anybody that Christmas isn’t for, apparently). Even the presence of Vanessa Hudgens, a slightly more recognisable actor than you’d normally find in one of these movies, wasn’t enough to persuade me, despite the promise of two Vanessa Hudgens on-screen at the same time (which, given the actress’s stunning beauty, is certainly a tempting prospect).

However, with the impending, and in some ways inevitable, sequel quickly approaching, I finally caved and queued up the damn thing on my account. What I got was more or less what I was expecting; a Christmas-themed romance with plenty of cheese and lameness to go around, but at the same time it felt so sincere with quite a bit of charm, that I couldn’t help but feel just a little bit uplifted by the end. I had been completely suckered in, despite myself, and found myself revelling in its silliness.

The sequel, titled The Princess Switch: Switched Again, is basically more of the same, albeit with a noticeably larger budget than before (they can actually afford more than just public domain Christmas songs for the soundtrack this time!), and your enjoyment will probably depend on your tolerance for this kind of movie. Personally, though, I was entertained enough to stick with it, despite recognising its deep stupidity at times, and didn’t feel too guilty about admiring its overall likeable sensibilities.

Taking place two years after the events of the first film, Chicago baker Stacy (Hudgens) is now the Princess of fictional European country Belgravia (where everyone speaks perfect English and even get around in London-style taxis; hell, it’s even named after a London district), having married the handsome Prince Edward (Sam Palladio), while her identical ally – the Duchess Margaret (also Hudgens) of the equally fictional Kingdom of Montenaro – has opted for a life with Stacy’s friend Kevin (Nick Sagar) back in Chicago. However, when the King of Montenaro dies, Margaret becomes the heir to the throne, dooming her relationship with Kevin and forcing her back to her country to take on her new responsibilities. Stacy, however, becomes determined to pair the soon-to-be-Queen Margaret back with Kevin, and soon convinces her to switch places once more so that they can rekindle their romance – this time, however, their plans are thwarted by Margaret’s wild cousin Lady Fiona Pembroke (Hudgens again), who plots her own scheme to take the throne for herself.

With Hudgens also an executive producer, this movie is more or less The Vanessa Hudgens Show, with the High School Musical alumni taking on three separate roles which see her indulge in extravagant Christmas settings and campier faux-British accents. The actress is clearly having fun in all three parts, especially as the film’s pantomime villain who comes with two bumbling Cockney sidekicks, and she is a charming enough actress to carry herself on three separate occasions where she has to be bubbly, confined, or in the case of Fiona completely Cruella De Vil-esque. Her tripled presence does admittedly give many of her co-stars a little less to do other than stand there and look pretty (her two male co-stars Nick Sagar and Sam Palladio are very much eye candy and not much else), but she is fun and likeable whenever she needs to be.

The rest of the movie certainly goes through the motions of a stock sequel, from the slightly re-heated plot to exposition dumps designed to fill the audience in on events we haven’t witnessed in between films, and much like the first it sets a completely inoffensive tone for itself which does mean that a lot of the conflict is easily resolved without much in terms of true threat. If you’ve ever seen a Hallmark or Lifetime Christmas movie in your life, then you’ll easily pick up on a lot of the familiar tropes here (festive decorations around every corner, bland romantic sub-plots, cheesy dialogue etc) just as you may have done during the first Princess Switch movie, but if you’re numb to them by this point or are even an unapologetic fan of these types of films, then you’ll have no problem buying this fairy-tale world where wish fulfilment doesn’t even begin to describe the good fortunes that the main characters have found themselves in.

As someone who often sees these types of movies as nothing more than throwaway movies you get rid off once the festive season is over (along with the tree and everything else), I was pleasantly surprised by both of these Princess Switch movies. I wouldn’t recommend either as legitimately good films – they’re too saccharine and cheesy to a fault – but for something I had no real interest in watching, I was at least glad I got some kind of charm and entertainment out of them, even if it wasn’t always for the right reasons.

The Princess Switch: Switched Again is a charming if silly continuation of the surprise hit Netflix festive romance, with Vanessa Hudgens exhuming her likeable self in three separate roles, and managing to steer the film towards a sweet and inoffensive tone despite many of its typical Hallmark Christmas movie tropes.

The Princess Switch: Switched Again is now available on Netflix.