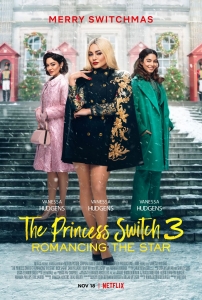 BASICALLY…: When a priceless Christmas treasure is stolen, Princess Stacy (Hudgens) and Lady Margaret (also Hudgens) team up with their former nemesis Fiona (also also Hudgens) to get it back…

Like all Hallmark/Netflix Christmas movies, The Princess Switch films are pure fluff, designed down to the tee to be as inoffensive, harmless and blissfully mindless as they are allowed. However, that doesn’t mean that we still can’t enjoy them exactly because they’re so silly; these are movies that still manage to be respectable because they know exactly what they are, however light and safe they may be, and honestly they’re among the more watchable of these conveyor-belt Christmas movies, based purely on the efforts of lead actress Vanessa Hudgens and how much fun she’s having playing multiple roles.

Even this latest entry, The Princess Switch 3: Romancing The Star, has its charms amidst the cheese. Of the three, it’s probably the least strong, and by far the most unnecessary, but it’s impossible to get mad about because, again, it’s so endearing and sincere without trying too hard to be anything else.

This entry gets things moving pretty quickly, for within the first ten or so minutes we’ve covered the basics of the plot: essentially, a priceless Christmas artifact that has come straight from the Vatican to the kingdom of Belgravia – ruled over by Queen Margaret (Hudgens) and her lookalike consort Princess Stacy (also Hudgens), and their respective hubbies Kevin (Nick Sagar) and Edward (Sam Palladio) – is suddenly stolen, and so the royals turn to their former nemesis Lady Fiona Pembroke (Hudgens again), who is now doing community service for her crimes in the previous movie, to help track down the thief and reclaim the artifact.

Yes, The Princess Switch 3: Romancing The Star is a heist movie, complete with its own Danny Ocean-type character in the form of Remy Hii’s Peter Maxwell, who so happens to be Fiona’s ex (no prizes for guessing how that ends up in this Hallmark Christmas romance flick).

It is rather amusing to see this series which began life as a fluffy rendition of The Prince and the Pauper suddenly go all crime caper on us, because normally this would signify that the movies have officially run out of ideas – which, in a way, they kind of have, since virtually all of the loose ends revolving around Hudgens’ dual Margaret and Stacy roles were tied up in a neat Christmas bow by the end of the last one. There’s nowhere else for these characters to go in terms of their overall development, and this third entry knows it since it designates them to strictly supporting roles, allowing none other than Fiona – the campy pantomime villain from last year’s second entry, and the only other Vanessa Hudgens character in this universe (that we know of) who is in need of her own happy ending – to pretty much become the de facto lead here.

Of the three Vanessa Hudgens characters, Fiona is given the most screentime, has the most development out of everyone, and she even not only gets a romantic love interest, but also a sub-plot about her estranged mother who abandoned her at an orphanage many years ago. It is typical sequel practise, in that it gives someone who was previously either an antagonist or a supporting character much more prominence and a humanising arc, but the reason any of it works is because, as always in these films, Vanessa Hudgens is having so much fun in the role, hamming up her Cruella DeVil-like speech patterns and campy physicality like it’s the last thing she’ll ever do. As the other two characters, Hudgens has less to do, except revisit the whole switcheroo plot for a couple of needless detours), though it’s still plenty more than anyone else gets to do, with every other supporting character in this relegated to absolutely useless parts where they contribute and sometimes even say nothing of importance.

The plot is very easy to figure out, with no surprises whatsoever and almost zero threat (the villain of the film is set up as someone who will resort to murderous means to keep his criminality a secret, but in the end he proves to be about as menacing as a fluffy teddy bear in a Santa costume), and you can tell that this was a slightly rushed production as they clearly couldn’t afford to shoot important scenes that are filled in by some awkward exposition. However, while this is perhaps the weakest Princess Switch movie to date, it’s still impossible to hate because, like its predecessors, it is completely comfortable being exactly the kind of movie you think it’s going to be. Sure, it’s fluffy nonsense, and you can poke holes in this plot from all angles, but The Princess Switch 3: Romancing The Star is just par for the course with this harmless but still rather charming series of movies which, despite their silliness, make for reasonably entertaining Christmas escapes.

The Princess Switch 3: Romancing The Star is probably the weakest in the series thus far, but it still somehow manages to stay inoffensively charming despite its strong cheesiness, basic heist plot, and lack of material for most of its characters, with Vanessa Hudgens once again having plenty of fun in three separate roles.

The Princess Switch 3: Romancing The Star is now available on Netflix.