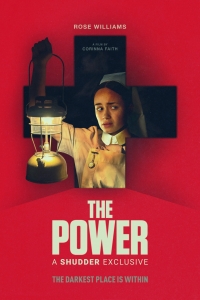 BASICALLY…: During a night shift in a dark, deserted hospital, a trainee nurse (Williams) encounters a dark presence lingering in the building…

In a lot of ghost stories, one of the biggest conveniences is for all of the electricity to suddenly go out, leaving the protagonists with no choice but to face the supernatural entities in pure darkness. That’s why a setting such as East London during the 1974 miners’ strike, which forced the government to introduce scheduled power cuts in order to preserve energy, is such an ingenious one for a film like The Power, because that oft-ignored trope actually has a proper reason for being, and makes sense within the context of both the story and the time period.

Darkness, therefore, reigns supreme in BAFTA-nominated short filmmaker Corinna Faith’s feature debut, which heavily plays around with the idea of things going bump in the night to often chilling and atmospheric degree, and even offers a number of chilling, even disturbing, developments that make the central ghost seem quite tame by comparison, all with a mostly pleasing end result.

As stated, the film takes place in early 1974 during the midst of the miners’ strike, as young nurse-in-training Valerie (Rose Williams) heads to her first shift at a large East London hospital, which is in the process of moving the bulk of its patients and staff over to another facility to accommodate the scheduled black-outs. Valerie is selected to be one of the few remaining nurses on night duty in the dark, largely deserted hospital, which means a lot of pitch-black hallways lit only by gas lanterns, something that disturbs Valerie greatly due to a past incident which, as we very quickly catch wind of, gives her great reason to fear the darkness. Even worse, there appears to be a ghostly presence stalking the halls and wards, which appears to be specifically targeting poor Valerie for very troubling reasons that, again, suddenly make all the paranormal activity by far the least seedy thing about this hospital.

There is a strong, underlying ferocity in both Corinna Faith’s writing and direction, which not only sets itself up as a largely effective supernatural horror – familiar tropes from bodily possessions to vivid musical stingers are present here, but executed well enough by a director who certainly knows how to elicit mood and atmosphere out of a dark screen – but also a surprising call-to-arms for female survivors of abuse and harassment. Faith’s script gets into some disturbing details when it comes to describing some characters’ rather horrific backstories, especially as the real threat becomes more and more apparent (hint: the title of The Power refers to something other than the electricity), making it a timely horror that examines the nasty treatment of women and young girls in this time period, and particularly in an environment where you are expected to fully trust the people taking care of you. Beyond the traumatic past that Valerie has gone through (which is not-so-subtly telegraphed for use via a specifically framed window shot), she has to contend with creepy older men lifting up her skirt in lifts, and later screamed at by equally off-putting janitors who have naked pictures hung up all around his work space; the buck, unfortunately, doesn’t stop there, for there’s even more skeeviness surrounding other characters we at first assume to be allies, and vice versa, leaving Faith to guide us through an onslaught of victimhood where nobody is safe, and yet still comes at it far more subtly and less obnoxious than something like 2019’s Black Christmas did.

As a tale of feminist empowerment, it’s effective enough to get you on its side, but it also remembers to be a rather decent supernatural horror on top of all that as well. In that department, The Power certainly has its merits, including some chilling cinematography by Laura Bellingham that makes as much use out of its extended dark hallways as it can, and a very physically demanding lead performance by Rose Williams who, much like Bellingham’s eerie and dimly-lit shots, dominates the screen with quiet menace and lingering danger. Some of the supporting characters, including a rival nurse played by Hollyoaks’ Emma Rigby, are clearly there just to meet a grisly fate later on, but Faith’s script does not write them off as completely two-dimensional caricatures (except for a ridiculous final climax wherein one person suddenly goes completely into over-the-top serial killer mode), while the more outlandish scares are pleasantly restrained, using as few jump-scares or fake-out dream sequences as possible, and even the few times where that is the case, they’re actually relevant to the story and not there just for the sake of it.

Parts of the film, though, do tend to drag and also threaten to render things confusing, but The Power overcomes these obstacles which partially overpowered other recent ghost flicks like The Banishing and The Night, because it keeps things going at a good enough pace with competent, likeable lead characters that you do feel empathy for in this situation. However, that doesn’t stop some of the cornier elements from seeping through, including the presence of a mostly stock child character who, naturally, knows a bit more about the ghostly presence than she’s perhaps letting on, and the way it ultimately ends which, though empowering in theory, is a little silly to see be put into practise on the screen.

It certainly won’t win you over if you’re sick to death of ghost stories dominating the horror movie landscape, but The Power has a bit more going on beyond the supernatural elements, which ultimately make it a solid enough genre debut for writer-director Corinna Faith. Hopefully she has some more socially relevant tricks up her sleeve for any future projects, because if this film proves anything, it’s that she can mesh together relevant topics with decent scares to a predominantly satisfying end.

The Power is a mostly effective supernatural horror that makes strong use of its darkly-lit atmosphere, brought to chilling life by some eerie pitch-black cinematography as well as an impressive physical turn by lead actress Rose Williams, with writer-director Corinna Faith also taking the opportunity to explore certain disturbing themes of female abuse and harassment which ultimately lends itself to an empowering, if slightly overdone, conclusion.

The Power is now available to stream on Shudder.