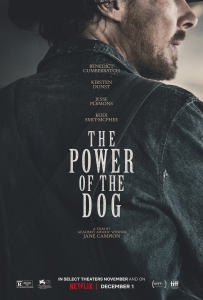 This review of The Power of the Dog was conducted as part of the BFI London Film Festival 2021.

Benedict Cumberbatch really likes playing complete and utter a-holes, doesn’t he? From his arrogant portrayal of Sherlock Holmes to the slimy dragon Smaug in the Hobbit movies (even his more heroic roles like Doctor Strange have a tinge of dickheadedness to them), Cumberbatch certainly excels at playing a character you love to hate, but even those characters might look upon the one he plays in The Power of the Dog and think to themselves, “Wow, that guy straight up sucks.”

Cumberbatch’s far-from-heroic lead turn in writer-director Jane Campion’s new feature – her first since 2009’s Bright Star – is already (and rightfully) receiving high praise for its pure ferocity and intimidation, presenting an often daring and dark study of toxic masculinity in a cold and often harsh story where real heroes are scarce and, most worryingly of all, far too eager to prove themselves as such.

Set in the wild countryside of Montana in 1925, we are introduced to the Burbank brothers Phil (Cumberbatch) and George (Jesse Plemons), who are cattle ranchers who have acquired a significant wealth through their strong business. Personality-wise, they could not be more different; while George is reserved and considerate, Phil prides himself on his rough and dirty demeanour, bathing in mud by a nearby lake and walking around with what have to be the tightest trousers in the West. However, when George suddenly takes a wife – the sweet-natured widow Rose (Kirsten Dunst) – Phil decides to make it his life’s mission to bestow despicable cruelty upon her and her sensitive son Peter (Kodi Smit-McPhee), and very soon his torment starts having negative effects on everybody, especially Rose who even starts turning to hard liquor in order to just be in the same room as him.

At first, you might be thinking, “Why would I want to watch a movie about this guy being absolutely horrible to this nice lady for no apparent reason?” Once you start to peer behind the curtain, though, the more you realise that it forms part of a surprising façade that masks a much more fascinating, and even heart-breaking, truth. Campion’s writing, based on Thomas Savage’s 1967 novel of the same name, does well to establish that despite his frequent displays of macho behaviour in front of his fellow ranchers and even his own family, Cumberbatch’s Phil is hiding a leagues-deep insecurity about his own identity, and has been forced to bury some major secrets for so long that it has completely wiped out any humanity that might have been left somewhere inside. It doesn’t excuse him from some of the truly hurtful things he says and does throughout the film, which you feel so sorry for poor Kirsten Dunst (who, like Cumberbatch, does some excellent work here) having to put up with so much of it, but it does add a very interesting layer to the mix as it hints at a real tragedy to his character, as opposed to just having him be a mere two-dimensional ruffian.

Campion’s filmmaking, as those who know her work like The Piano and Bright Star can attest, is stellar not just in how gorgeous and vast it looks, but how it also beautifully ties into the calm, creeping power play that the anti-hero is sadistically inflicting upon his new sister-in-law. The filmmaker often brings us up close to Cumberbatch’s dirt-ridden face, allowing us to see his conniving thought process play out in real time, and to bear the brunt of his vicious insults the moment he doesn’t get his way (his reaction to brother George politely refusing a drink is particularly venomous even for typical brotherly banter), leaving us feeling as trapped by him as Dunst and Smit-McPhee are when they constantly fall victim to brutal name-calling and, in a fine example of explaining the conflict without a single word of dialogue, showing up her average piano skills with a near-flawless banjo rhythm. Stunning cinematography by Ari Wegner captures the vast and masculine Montana wastelands (Campion’s native New Zealand fills in for the American West here, to glorious effect each and every time), while Jonny Greenwood’s haunting score gives way to a dour truth hiding from both the characters and the audience in plain sight. Even pleasant scenes of Plemons and Dunst (who are a couple in real life) having genuinely sweet and touching moments together are tinged with an uneasy feeling brought about by the foreboding filmmaking, because you know that their real bliss is about to get a lot uglier thanks to the meddling of a toxic-minded family member.

The Power of the Dog, for the most part, features tight pacing that is bookmarked by chapter numerals, but as it starts to move towards the inevitable climax, it starts to slip a little bit. Suddenly, a movie that felt like it was going somewhere rather quickly doesn’t seem to have an immediately apparent endgame, leaving you slightly bewildered by an anti-climax of sorts that feels far less of a payoff than could have been, especially with this central character treating such kind people like utter garbage. Campion is able to turn things around so that at least one major character has a reasonably bittersweet conclusion, but there is an overwhelming loss of urgency in the lead-up to such a resolution that it almost feels false amidst a pretty grounded, cold-hearted narrative.

Cumberbatch, though, is the domineering force that compels you even in its lesser moments. His performance is a fierce beast in and of itself, so drowned in its own understanding of machismo compassion that the real thing has long since flown out into the wilderness, which the actor utilises with strengthened charisma but also an underlying sense of tragedy that makes his latest turn as a total a-hole one of the most effective, and certainly most a-hole-ish, in a long line of dickheads he’s played.

The Power of the Dog is a gorgeous Western that explores the dangerous nature of toxic masculinity in the Old West, which under Jane Campion’s forceful writing and direction is steered into surprising territory that is gorgeously made and excellently acted by the likes of Benedict Cumberbatch and Kirsten Dunst, who save some occasional pacing issues.

The Power of the Dog will be available on Netflix from Wednesday 1st December 2021.

It will also be showing in cinemas nationwide from Wednesday 17th November 2021.