The Possession of Hannah Grace (Review)

The Possession of Hannah Grace (Review) 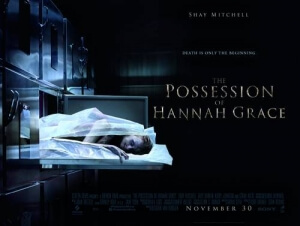 BASICALLY…: A woman (Mitchell) discovers a horrifying presence when she takes an overnight shift at the morgue…

I wasn’t originally planning to see this movie; not that I was actively avoiding it (kind of like what I’m doing with Nativity Rocks!, in case you’re wondering where the review for that film is), but because up until a couple of days ago there wasn’t even a showing for it at my local cinema. However, just as I was double-checking to see what was playing that day, there it was: one showing for The Possession of Hannah Grace, at 10:30pm, on a Friday evening.

Naturally, being the glutton for punishment that I am, I decided to wait out the rest of the day until that one showing of the day, and having now seen it I can kind of understand why it was only showing once at that time of night. It’s pretty much exactly what I was expecting it would be; a horror movie that reminds you of so many other films you could be watching instead, and a pretty lame one on its own. However, it’s not completely awful, especially when you put it next to some of the much worse horror movies from this year like Slender Man and Truth or Dare, but it still isn’t very good.

Our protagonist is Megan (Shay Mitchell), a former cop who takes a night job at a morgue within a hospital where her Alcoholics Anonymous sponsor also works. One night, whilst she’s working alone, she is delivered the mangled corpse of a young woman named Hannah Grace (Kirby Johnson), whose body was possessed by a demon but was killed during an exorcism. As the night progresses, it becomes disturbingly clear that Hannah Grace – or at least, whatever is still inhabiting her body – isn’t quite departed from this mortal Earth, and Megan soon finds herself in a dangerous position that must see her confront her anxieties if she is to get the situation under control.

Given that its title is The Possession of Hannah Grace, a lot of people are probably going to be a little let down by how this movie really isn’t at all about Hannah Grace or her possession; however, this movie takes a more interesting route by having things take place after when a standard demon possession flick would usually end, and have it be a lot more about this one other character who’s stumbled in to the epilogue of such a movie. The set-up is certainly intriguing, and offers a few more possibilities than you would normally find in a movie like this, but the overall execution, sadly, doesn’t really deliver on that promise. The movie, as a whole, just isn’t very scary, as it relies a lot on some uninspired creepy imagery that you’ve seen in other films like this, and logic that more often than not really doesn’t make much sense. The film’s very first scene is the aforementioned exorcism, but then it suddenly cuts to three months later, at which point the possessed body finally finds its way into a morgue, which begs the question where in the hell did that body end up spending three months before being placed there, especially seeing how it doesn’t seem to have rotted when it’s delivered, so it was either kept safe in another morgue that ended up going through the same things that this morgue ends up going through, or it’s really nonsensical writing (don’t ask why, but my money’s on the latter).

Maybe it’s because I was seriously tired while watching this movie at this particularly late time, but I was having a bit of difficulty following what this film was actually trying to do, partially because it’s directed and especially edited pretty confusingly – specifically during a climax where most things are notably hard to make out – and also due to how every so often there would be only the slightest of explanations of what kind of demon the main character is going up against here. At one point, it is referred to as an embodiment of anxiety and depression, which is obviously meant to also symbolise the main character’s own inner demons (pun intended), but there has been nothing leading up to that point that makes it clear that this was the message that the movie was trying to convey, and it just comes across as a lazy way for the writer to combine your average evil demon possession with themes of low self-esteem issues and other humanly personality flaws. It wasn’t done in an interesting enough way to make me or any of the other audience members seem to care, and was so consumed by being a weird mix of The Exorcist and The Autopsy of Jane Doe – both wildly better movies than this, by the way – that it didn’t manage to have the brains or storytelling skills to match its clear ambition.

It’s far from being one of the worst horror movies this year, however; although this movie is definitely pretty weak, there are a couple of qualities that put it just above the likes of Slender Man. For instance, the acting is honestly not that bad; I haven’t seen or heard much about Shay Mitchell before this film – and the same thing can be said about the whole cast, quite honestly – but she does perfectly fine in the lead role, despite the clichés she’s forced to work with in the script she’s given. There are characters, and performances, that don’t fit into the overall aesthetic this movie is aiming for, like a comic relief security guard that looks like a slightly blonder Carrot Top and is about as aggravating to be around, and a friendly guy that the main character comes across whose fate is immediately apparent as soon as he shows her a picture of his young child (which, in a film like this, is like if in It Follows they just sat there doing nothing until the monster caught up with them; they’re practically asking to get killed off in this horror movie).

I’d get angrier at this film, but it’s honestly not bad enough to even stir up those kinds of emotions. I will forget about this movie in due time, but never the fact that I had to pinch myself just to stay awake during the late showing of this thing.

The Possession of Hannah Grace sets itself slightly above some of the worse horror movies released this year with an intriguing set-up and decent acting, but it ultimately succumbs to unscary tropes not done in an interesting enough way to fully hold your attention.