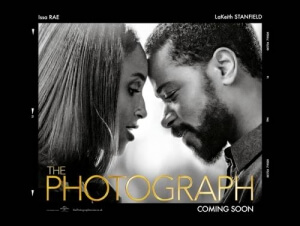 BASICALLY…: Mae Morton (Rae) forms a romance with the journalist (Stanfield) as she delves into the life of her estranged mother…

The undoubtedly sweet nature surrounding Stella Meghie’s The Photograph is extra shocking when you realise that one of her more recent films was the horrifying YA story Everything, Everything, which was anything but sweet and even as disturbing as some of that year’s most notable horror movies.

Needless to say, this is the far better movie, probably because it doesn’t have a third-act twist that’s straight out of a psychological thriller, or Anika Noni Rose giving one of the creepiest and most sinister mother performances since Piper Laurie in Carrie. This one, however, contains a lot more love and care, and actually leaves you with a pretty good feeling about life, even if it’s not exactly going to go down in history as one of the all-time great romances.

The primary focus of the film is on reporter Michael (Lakeith Stanfield), who during an assignment stumbles upon the work of a photographer named Christina Eames (Chanté Adams) who has recently passed away, and who soon gets into contact with Christina’s daughter Mae (Issa Rae), an art gallery curator. Michael and Mae very quickly hit it off, but Mae is not quite as willing to open up as Michael is, largely due to her complicated relationship with her emotionally distant mother, which is explored through a number of letters that Christina leaves her. From there, we also flash back to when Christina was choosing her own path as a young woman in 80s Louisiana, which includes a tender relationship with local fisherman Isaac (Y’lan Noel) and leaving town for New York to begin her career as a photographer.

This kind of multi-generational storytelling has certainly worked its way into several romantic stories over the years, and while The Photograph doesn’t exactly tread new ground when it comes to cutting back and forth throughout time – sometimes, the cuts can jar the tone somewhat, with a present-day scene being quite jovial and tender, while a past-set scene following immediately after suddenly dials the dramatic tone way up – it still manages to make effective use of the non-linear narrative to at least serve as a wholesome experience. Meghie lets her scenes breathe for long enough to allow the audience to absorb the atmosphere and the burning connection that our two main leads share, allowing it to feel real and not too manufactured, while also pacing the film steadily with a reasonable amount of focus, which ensures that the audience isn’t losing interest despite the familiar tropes of this kind of film that are present and correct here. It’s a well-made enough film that you at least harbour some interest in how this particular story pans out, as well as how the one taking place in the past unfolds, even though it foreshadows a twist that can be seen coming miles off.

Mainly, though, the reason you are so invested in these people is because of the people playing them. Lakeith Stanfield and Issa Rae have impeccable chemistry that carries the whole movie all the way through, and you really feel their connection in practically each and every one of their scenes together, whether they’re debating who’s the better rapper – Kendrick Lamar vs. Drake – or listening to Al Green vinyls during a stormy night. Both are incredibly charming and charismatic actors who have each done solid work in the past, and putting them together in a movie that highlights just how much screen presence they actually have was a very smart move on the part of the casting director. Even the supporting cast has some stand-outs, from Lil Rel Howery as Michael’s brother in a much more toned down performance than we’ve seen him give recently, to recent breakout actor Kelvin Harrison Jr. who pops up in an amusing role as an intern at Michael’s workplace, to even character actor Courtney B. Vance who pops up for a couple of scenes as Mae’s father.

You’ll probably have noticed that those actors are all participants in the present-day segment of the film, with barely any mention of the ones in the other 80s-set storyline, and that kind of ties in to how that section of the movie sadly doesn’t have quite the same rhythm. Though the acting is certainly strong, particularly Chanté Adams as the photographer at the centre of everything, it feels like an unnecessary tag-on to a story that was already working fine on its own; much of it feels like it could have served well enough as its own film, but here it tends to drag everything to a virtual stop, especially when everything set in the present day was much more interesting and had more of its own character to speak off. Every time it cuts back to it, you’re sitting there waiting for it to go back to Issa Rae and Lakeith Stanfield being charming, because it’s a lot more engaging than this rather stock period piece that it suddenly becomes.

Though the movie isn’t going to necessarily earn many points for sheer originality when it comes to portraying an on-screen romance, it does make up for it with a real sense of charm which gives it the spark of life that it needs, ignited by two actors who work extremely well together and a director who does know how to flaunt and compliment their winning chemistry. If Meghie had brought this level of energy and sophistication to Everything, Everything, then maybe it wouldn’t have been the unintentional nightmare that it was.

The Photograph might not tread new ground when it comes to movie romances, ground which is slightly dampened by a largely tagged-on sub-story set in the past, but its imperfectness is well-balanced by a sophisticated pace by director Stella Meghie, and two charming performances from Lakeith Stanfield and Issa Rae whose chemistry is off the charts.

Want to decide what the movie’s like for yourself?
Check out The Photograph showtimes in London
via