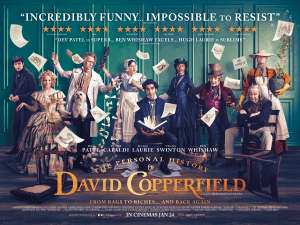 BASICALLY…: In Victorian England, penniless orphan David Copperfield (Patel) attempts to make his own way in the world…

In my first review of Armando Iannucci’s otherwise delightful new spin on Charles Dickens’ classic story, I remarked how it could be an overwhelming viewing experience with so much plot, dialogue and characters coming at you thick and fast that it barely lets up to allow you to take a breath.

On second viewing, while it is still true that the pace is certainly as sharp and quick as its comedy, it resonates a lot easier this time around since I not only expected it going in but I also now know a little bit more about the original story and its background, making it a slightly more intriguing adaptation than I had first realised.

In case you need a reminder, the film is set in Victorian England where a young man by the name of David Copperfield (Dev Patel) goes on a bumpy road through life. Starting off as the beloved child of young widow Clara (Morfydd Clark), he is soon sent to London by his wicked step-father Edward Murdstone (Darren Boyd) to work in a bottling factory, under the watchful eye of hugely indebted Mr, Micawber (Peter Capaldi), but soon leaves to seek out his aunt Betsey Trotworth (Tilda Swinton) and her airy cousin Mr. Dick (Hugh Laurie), who bankroll his journey to become a gentlemen. Along the way, he finds friends in the smug and self-serving  James Steerforth (Aneurin Barnard), companionship in the kind-hearted Agnes Wickfield (Rosalind Eleazar), makes an enemy out of the snivelling Uriah Heep (Ben Whishaw), and finds possible love in the ditzy Dora Spinlow (also Clark, in a bit of double-casting that calls to mind Sigmund Freud’s Oedipal complex).

The thing that strikes me about this film is how it is not just a loving interpretation of the classic tale – famously said to have been based on Dickens’ own experiences – but is also a tribute to the art of writing itself. Throughout the film, Copperfield has wild bursts of inspiration from the numerous characters he comes across, often writing down onto paper memorable anecdotes spoken from their very mouths, and taking inspiration from certain figures to create wildly exaggerated versions with the purpose of entertaining others. A framing device for the film even has Copperfield read the story on-stage to a packed theatre crowd as Dickens himself used to do, further elaborating how the character of David Copperfield was created as a semi-autobiographical avatar for Dickens in this particular story. The way that Copperfield tells his story in the film is with great passion and perseverance for his craft, and Iannucci’s direction and script (co-written by Simon Blackwell) compliments that passion by focusing heavily on the character’s euphoric sense of creativity, which helps enormously to mould him into the masterful storyteller he is destined to become. Dev Patel’s lead performance is also noteworthy because he captures the zany energy that Dickens was known to put into delivering his stories and puts it all into a character that embodies everything Dickens was and is still celebrated as being to this day.

Being a joyful ode to creative writing is one thing, but for it to work as a strong adaptation in its own right is an entirely separate feat, especially when there are so many other adaptations of the source material out there with which this one will probably be unfairly compared to. Iannucci works his magic in this department too, because he takes the basic crux of the story and carefully places the pieces together with a style that’s not unlike a Danny Boyle film; for example, flashback scenes will be projected onto walls in front of characters, while a grown Copperfield will appear in early childhood scenes as he’s narrating the story, and a later scene starts to humorously turn into a clown-car of main characters randomly turning up during a pivotal moment as though it were a stage play. It’s among Iannucci’s most stylish work to date, light years away from the considerably more grounded In The Loop and The Death of Stalin, but not lacking in the sharp wit and moments of pure British comedy that made those other movies of his stand out, which help to give the story a new lease of life in the same way that Greta Gerwig’s Little Women recently did.

If you do go into it and find that it is a little too much to take in at first, as I did when I first saw it, then there is no shame in admitting so. The quickened pace and rapid-fire delivery of jokes and dialogue perhaps work best if you have previously read the source material, in which those things are jotted down for generations upon generations to read on their own time, but the sheer optimism that Iannucci injects into his version of the story is something that anyone can admire regardless of whether they’ve read it beforehand or not, and it makes for a sweet and uplifting crowd-pleaser that anyone of any age can enjoy. Filled with lively performances, dashes of British wit, adorable life lessons and some truly unforgettable characters brought to extravagant life by an ensemble of capable and diverse performers, this is an adaptation that earns its place among the many Charles Dickens movies that aren’t just a mere re-telling of stories that everyone and their grandmothers know off by heart at this point.

You’ll be hard-pressed to find someone who isn’t at least partially won over by this movie and its lead character’s incessant charm, and Iannucci ensures you won’t leave without a smile on your face.

The Personal History of David Copperfield is a delightful and stylish new take on the classic Charles Dickens story, which director and co-writer Armando Iannucci uses to not only deliver a fresh rendition on certain characters and plot points, but to also serve as a loving ode to the wonders of creative writing.

Want to decide what the movie’s like for yourself?
Check out The Personal History of David Copperfield showtimes in London
via