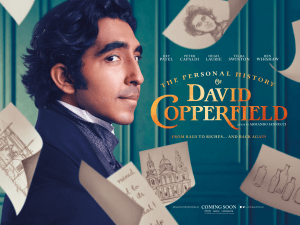 This review is of the cut shown at the BFI London Film Festival in October 2019 – the UK release date is currently listed for January 10th 2020.

Charles Dickens famously declared David Copperfield to be his “favourite child” out of all of his stories, and there’s a reason why; full of optimism, delightful characters and witty dialogue, it is worlds away from his bleaker tales of Victorian England, and unlike a certain number of them it leaves you with a overwhelming sense of joy as well as a desire to return to this world and its inhabitants.

It’s a positive that director Armando Iannucci very much runs with in his take on the classic story, and as it turns out his particular brand of satirical comedy blends perfectly with Victorian sensibilities, which makes The Personal History of David Copperfield an absolute joy to behold.

For those unfamiliar with the material, the story is about a young man named – what else? – David Copperfield (Dev Patel), who has an interesting transition into adulthood; initially growing up with his loving mother Clara (Morfydd Clark), he is soon sent away by his monstrous step-father Edward Murdstone (Darren Boyd) to work in a London bottling factory, where he lodges with the penniless but endlessly optimistic Mr. Micawber (Peter Capaldi) and his family. After his mother dies and when Micawber is sent to debtors prison, he seeks refuge with his eccentric aunt Betsey Trotwood (Tilda Swinton) and her hapless tenant Mr. Dick (Hugh Laurie), with whom he sets on a path to become a gentleman, on which he makes a friend in the handsome but self-interested James Steerforth (Aneurin Barnard), makes an enemy in the snivelling and conniving Uriah Heep (Ben Whishaw), and possibly finds the love of his life with the beautiful and ditzy Dora Spenlow (also played by Clark, in an interesting bit of double-casting that would send Sigmund Freud into a frenzy).

With any other filmmaking voice behind it, this would have just been yet another disposable Charles Dickens adaptation, but Iannucci manages to bring something fresh to the material, namely a wicked sense of humour that really plays up the eccentricities of these characters – Swinton’s Trotwood in particular is a riot, pushing people off of donkeys and giving a character salad dressing instead of medicine – and prevents the movie from taking itself too seriously. As with his previous films In The Loop and The Death of Stalin, Iannucci finds that perfect balance of laugh-out-loud comedy and social commentary, tackling everything from poverty to Victorian sensibilities with a rich self-awareness that highlights how amusing these events can be instead of showing them for the dark and depressing realities that they are. It makes the film not only very funny, downright hilarious at times, but also rather nice to experience, a sunny alternative to an otherwise overcast environment which, with everything going on in our current society at the moment, is a much-needed breath of fresh air.

Iannucci is supported by a cast that is absolutely perfect, including a wondrously charismatic leading turn by Dev Patel who brings substantial levels of energy to the part and is simply wonderful because of it. Memorable turns by Tilda Swinton, Hugh Laurie, Peter Capaldi and Ben Whishaw are also worth mentioning, as well as scene-stealing appearances from the likes of Gwendoline Christie, Paul Whitehouse, and rising actress Morfydd Clark whose Dora is an absolutely adorable presence; in short, this is a perfect cast who plays their roles absolutely perfectly. Also of note, the film has a lot more diversity than many other adaptations of this story, or indeed many Dickens adaptations altogether – beyond Dev Patel’s casting in the title role, there are substantial parts for black, Asian, Indian and mixed race actors all throughout, a deliberate choice by Iannucci to highlight how Victorian England might not have been as, well, vanilla as most other media depictions of the era have suggested. The diversity is, like most of everything else about the film, a refreshing approach to the material, and brings – if you’ll excuse the pun – real colour to the story more than ever before.

If one were to dig deep and pull out any flaws the film might have, one of them might be that it can sometimes be an overwhelming experience. The plot, characters, dialogue, comedy etc come at you think and fast with not a lot of room in between to breath, which might leave you feeling exhausted once the film finally does wrap up, because it is a lot to take in all at once. Honestly, though, if the biggest problem I can find about this movie is that it’s too much of a good thing, then it is by all accounts still very much a good thing, with a real charm and sophistication that sparks a whole new sense of life into a story that’s over 150 years old.

Dickens would be proud of how bright and cheerful his “favourite child” has been portrayed on the screen here, which is probably the biggest compliment anyone could ever wish for their movie.

The Personal History of David Copperfield is a joyful new version of the classic Charles Dickens story, brought to life with Armando Iannucci’s trademark sense of humour and a perfect cast who capture the timelessness of their characters.

Want to decide what the movie’s like for yourself?
Check out The Personal History of David Copperfield showtimes in London
via