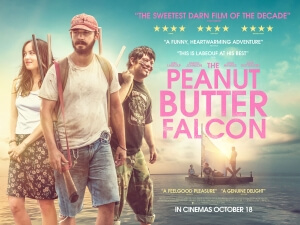 BASICALLY…: A young man with Down Syndrome (Gottsagen) runs away from his care home and embarks on a journey with outcast Tyler (LaBeouf)…

This review is of the cut shown at the BFI London Film Festival in October 2019 – the UK release date is currently listed for October 18th 2019.

Thank you, Movie God, for willing The Peanut Butter Falcon into existence. A heavenly delight of a movie, this is pure cinema with a genuine passion for storytelling, pitch-perfect performances, a winning sense of humour, and above all else just the most joyful feelings it leaves you with. I haven’t smiled the whole way through a film in so long, and I’m hard-pressed to think of any other movie this year that has completely no flaws to it whatsoever – I know it seems like I’m just rambling on and on, but this movie is so fantastic that it’s honestly left me momentarily without the ability to gather my thoughts.

I don’t even want to get into exact details about it, because that would waste time you should be spending on seeing this film as soon as you get the opportunity. But because this is what I do for a living, let me explain in more detail why a movie like The Peanut Butter Falcon is a truly special thing to behold.

We are introduced to our main character Zak (Zack Gottsagen), a young man with Down Syndrome who lives in an elderly care home, as he tries to escape his residence to little avail. It’s the latest in a number of incidents where he’s tried – and failed – to flee the nest, and make his way to a wrestling school run by his hero, the Saltwater Redneck (Thomas Haden Church). He does eventually manage to finally escape, and in the process finds himself in the company of Tyler (Shia LaBeouf), a lowlife who’s on the run from a vengeful gang of crabbers, and who reluctantly agrees to guide Zak on his quest. The two soon form an unbreakable bond, while Zak’s carer Eleanor (Dakota Johnson) searches desperately for him before anything too bad happens to him.

There is so much to praise about this movie, that it’s seriously hard to know where to start. How about the fact that this is a brilliant step forward for greater inclusion of disabled actors in movies; Zach Gottsagen, the young hero of this Mark Twain-inspired folly, is a wonderful find who has oodles of confidence and screen presence that constantly makes you forget that this is his first ever acting job, and writer-directors Tyler Nilson and Michael Schwartz – who first encountered Gottsagen at a camp for aspiring disabled actors – give him plentiful material to work with that propel him even further into acting greatness. Casting someone with a disability in a major movie is traditionally seen as “daring” and “experimental” by many journalists, which I’ve always found to be incredibly patronising. As someone with mild autism, I think that having a disability should never be seen as an obstacle that needs to be overcome in any profession, and people like Gottsagen are out there proving to the world that just because we are disabled doesn’t mean we can do these jobs any worse than other people who don’t have conditions to speak of. I hope that anyone who goes to see this movie feels the same way, and if not can at the very least be inspired enough by Gottsagen’s winning performance to demand more opportunities given to other people with disabilities, be they physical, mental, or even both.

Gottsagen also has one hell of a great cast to lean back on for support, primarily Shia LaBeouf who has never been better than he is here. He shares fantastic chemistry with both his young co-star and Dakota Johnson (also very good in the movie), and he gives an incredibly moving performance that is as magnetic as it is completely compelling; he completely owns this part, even revealing sides to his acting methods that previous movie roles have not been able to properly showcase. The movie is filled with great character actors popping up from every corner; there’s John Hawkes as the sinister leader of the crabbing gang, Bruce Dern as a supportive roommate at the care home, Jon Bernthal appears in audio-less flashbacks as LaBeouf’s brother, and even professional wrestler Jake “The Snake” Roberts shows up towards the end of the film. Some of them aren’t even on-screen for very long, yet they all leave their mark in their own unique ways, and only make you all the more sad that this is a world you can only visit for 98 minutes at a time. There’s not a single actor in this movie who feels out of place, delivers their lines awkwardly, or isn’t given something of substance to do; they are all absolutely perfect, and it’s rare that a cast be utilised in this strong of a manner in any kind of film, yet somehow they succeed.

As storytellers that are completely new to the scene, Nilson and Schwartz are already on their way to cinematic greatness – in fact, they might already be there with their first motion picture. Though the movie certainly owes a lot to the works of Mark Twain, there’s enough of its own voice to stand out as its own thing, such as a gleeful sense of humour, a deliberate slow-burn that really develops these characters, a consistent tone, and most of all just the warmest sensibilities this side of the Paddington movies. As I hinted towards earlier, I can’t recall the last time a movie had me feeling all sorts of emotions, all of them earned; I was laughing, crying, cheering, fearful, and all of it with the biggest grin on my face. There’s not a cynical bone in its body, and the way that this story and these characters are presented to us feels so genuine that you wish other movies could learn a lesson or two from it. That’s what makes it stand out from many of the other really great movies this year, because you can be big and epic like Avengers: Endgame and Once Upon A Time In Hollywood, or get into deep themes and topics like For Sama and Dirty God, but not even those films – as great as they are – leave you with such heavy reassurance about the goodness in people as this movie does. It’s the sort of film that can reaffirm your hope in humanity, a solid reminder that no matter how divisive and uncertain our society is right now, there are still people out there who are pure of soul and heart, who put the needs of others before their own, and who no matter what strive to be the very best person that they can be.

I could have stayed in this world for twice the length if it were possible, and once it did end that’s when I was at my most upset, because after such a breath-taking journey through this wondrous story with these three-dimensional characters, I was no longer able to be a part of it. That’s one of the many reasons I wish to revisit what is easily the best movie so far this year, and hopefully after you see it for yourselves you’ll be thinking the exact same thing.

The Peanut Butter Falcon is one of the most, if not the most, outstanding movies of the year with barely a single flaw to its name, from the great level of storytelling to lovable characters to the pitch-perfect cast. Don’t you dare miss this movie, because it’s quite the experience.

Want to decide what the movie’s like for yourself?
Check out The Peanut Butter Falcon showtimes in London
via