The Owners (Review) – A Mean But Mediocre Home Invasion Thriller 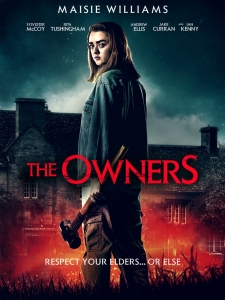 BASICALLY…: A home robbery goes wrong when the two elderly residents (McCoy and Tushingham) unexpectedly turn the tables on its young intruders…

Home invasion movies – among them Panic Room, Don’t Breathe, The Strangers, and both versions of Michael Haneke’s Funny Games – tend to follow such strict narrative guidelines that sometimes the subgenre doesn’t feel as fresh as it once was, and for the most part The Owners sticks all too closely to the tried-and-tested formula of people breaking into someone’s home and facing extreme consequences for it.

The one thing that really does stick out in the directorial debut of French TV director Julius Berg, however, is its incessantly grim and nasty tone which admirably remains all throughout. Even some of the more intense examples I listed above at least had some moments of hope amidst the darkness (well, except for Funny Games; that was just a miserable experience through and through), whereas there are hardly any to be found here, and if nothing else this movie earns a bit of respect for not shying away from its true rottenness, despite it not being especially appealing to everyone’s tastes.

Our home invaders in this movie are a small group of British hooligans: simpleton Terry (Andrew Ellis), thuggish Nathan (Ian Kenny) and psychopathic Gaz (Jake Curran), who have their eyes set on the stately home of local doctor Richard Huggins (Sylvester McCoy) and his wife Ellen (Rita Tushingham), who are rumoured to be keeping a safe full of cash somewhere in the house. Their plan to break in and find the safe is briefly upended by the arrival of Nathan’s girlfriend Mary (Maisie Williams), who’s irritated that he’s borrowed the car that she needs for work, but they eventually make it inside and trash the place in their search for the safe. When their efforts turn up no results, they decide to wait for the owners to return and force the code out of them by any means necessary – but, as in most other home invasions movies, the seemingly good-natured elderly couple turn out to have a few nasty tricks up their sleeve, leading to a battle for survival where nobody is safe.

The script, based on a French graphic novel titled Une Nuit de Pleine Lune, is more or less a standard home invasion thriller, which if you know the formula well enough by now doesn’t contain that many surprises when it comes to certain twists, or even how certain character archetypes are. As there usually tends to be, there’s at least one home invader who’s consistently the voice of reason and/or the de facto “final girl” which – surprise, surprise – is the role that Williams fits into, and there’s also an invader who’s so over-the-top evil and irredeemably diabolical that it’s a sweet relief when they finally get what’s coming to them (that’d be Jake Curran’s Gaz and his villainous hairstyle). It’s very simplistic, both in its plotting and its characterisations, to a point where you could even point to it as a pure example of the home invasion movie in a nutshell, regardless of its quality.

One thing you cannot take away from it, though, is how grim and unforgiving a lot of it can be. This is the kind of movie where you’re rooting for almost no-one, because as it turns out very few characters in this film are actually sympathetic and are instead capable of saying and doing some pretty vile things; even people who at first you think are going to be the moral high ground in this situation turn out to be creepy sex pests, verbally abusive, or straight-up murderous. The acting all around is certainly good, especially from the likes of Sylvester McCoy and Rita Tushingham who are clearly revelling in their darker-than-usual roles, which ensures that their characters’ unlikability has some extra sting in their deliveries, but the increasing nastiness of the film’s tone and plotting – especially its exceptionally bleak final reel, where the aspect ratio is interestingly trimmed from widescreen to a smaller, more claustrophobic box setting – is less than palatable for viewers hoping for a slightly more digestible movie.

However, as dark as this movie gets (and it certainly goes to some dark places), The Owners simply isn’t memorable enough to stand out. It really does stick all too closely to the home invasion formula to feel any different to the others, and I can see a lot of people being easily turned off by its mean-spiritedness because there are very few – if any at all – moments where you can actually find some hope and optimism in this bleak atmosphere. Obviously, I’m not expecting a home invasion movie to be happy and uplifting all the time, but at least give us something to chew on instead of the same stick we’ve been gnawing at before.

At the very least, The Owners should be an okay enough film for those who have ever wanted to see Arya Stark face off against the Seventh Doctor.

The Owners sticks far too heavily to the familiar home invasion formula to truly stand out, despite a meaner and bleaker tone that is admirable only in its determination to be so.

The Owners is out now to rent or buy on digital platforms, including Amazon Prime Video.