The One and Only Ivan (Review)

The One and Only Ivan (Review) 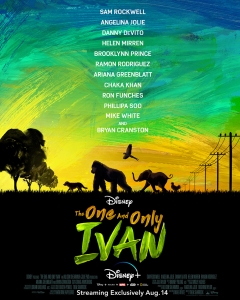 BASICALLY…: Ivan (Rockwell), a gorilla who has spent most of his life in captivity, finds new meaning when he befriends a baby elephant (Prince)…

As Disney continues to experiment with placing some of its biggest projects onto its new streaming service – which so far have ranged from the adorable retelling of Lady and the Tramp to whatever the hell Artemis Fowl was – its adaptation of the K.A. Applegate children’s story The One and Only Ivan is the latest to make its Disney+ debut, after being pulled from the theatrical schedule in light of the ongoing pandemic.

How it would have fared if it had ended up in cinemas as originally planned, we’ll probably never know, but it feels oddly appropriate that this film is headed straight to streaming instead, because while the film certainly has a lot of heart and maturity to it, the story and characters are simplistic to a fault, which doesn’t exactly scream of a worthwhile theatrical experience, but at home, in your living room with young children, it’s fine enough.

The live-action/CG hybrid film tells the story of a silverback gorilla named Ivan (voiced by Sam Rockwell), who has spent the majority of his life living in a small indoor confinement, backstage at a big-top circus in a tiny strip mall run by his human owner, Mack (Bryan Cranston). Ivan is fairly comfortable in his existence, performing to the small circus crowds along with other animals such as aging elephant Stella (Angelina Jolie), and even has a stray mutt named Bob (Danny DeVito) to call his best friend. One day, Mack brings in a new attraction to boost attendance: a baby elephant named Ruby (Brooklynn Prince), who Ivan soon takes a shining to, and who inspires the domesticated gorilla to begin having fantasies about living in a home that’s far grander and more spacious than his current one. Using his surprising artistic talents, Ivan manages to convince the world that he and his fellow incarcerated animals deserve a life of freedom.

The film, and by extension the book it’s based on, is inspired by the exploits of a real gorilla named Ivan who, again, used his extraordinary artistic skills to secure a much larger habitat for himself, which in a weird way makes this a biographical movie: the Gandhi of drawing gorilla movies. Obviously, for the sake of a family audience the filmmakers and original author took a number of dramatic liberties with the real-life story, but The One and Only Ivan doesn’t talk down to its younger demographic as much as a company like Disney might be in danger of doing. Instead, director Thea Sharrock and writer Mike White (the latter also having a small vocal role as well as a live-action cameo at one point) place a great emphasis on the gentle nature of the story to generate empathy, letting some very dramatic moments play out as naturally as they need to be without throwing in a tone-ruining joke or a sudden advancement in the plot. There are a couple of juvenile gags (including the obligatory fart joke), but by and large they are very scaled down and spaced out enough so that there’s more than enough room for the more important drama to be on full display. It’s refreshing to see a family film which for the most part treats its audience with respect, especially when it dives deep into some very upsetting territory when certain characters reach a particular point in their journeys.

Although it is certainly wise in its handling of drama as well as its overall respect of its audience, the substance itself isn’t really all that deep. It is very light fare, with stakes that aren’t too challenging for even its youngest audience members, and characters who are simplistic to a fault. The pace is slow for a 95-minute runtime, where for most of it not a lot happens except for the animal characters having repetitive conversations with each other, and by the time something eventful does come along it feels like it maybe should have come in a little earlier. It also comes with a message about the immoralities of animal captivity, which makes you see why big-name stars like Angelina Jolie and Sam Rockwell signed on to be a part of this movie, which again is done in a way that isn’t hugely insightful, nor is it even that profound, but is handled with enough heart to make you care about the animals and their growing desire for a life outside bars. It’s kind of like the film is telling a bedtime story to a young child, where everything is simplified enough that anyone of a certain age can understand it, but it’s treating the material as well as the kid they’re telling it to with enough respect and heart that the story lingers on more than anything which otherwise treats them with cynical contempt.

It’s not an especially complex movie, but a story like The One and Only Ivan doesn’t need to be; it just needs to tell the story it wants to tell, with enough genuine heart and soul so that anyone of any age can access it and find it a plentiful and likeable viewing experience. Some decent vocal performances, as well as some impressive photorealistic CG, make you sympathise with the light plight of these animals, and the simple story that involves all of them, making it a fine family movie that’s completely okay to watch with younger kids around, Either way, it’s a far more effective live-action/CGI talking-animal movie than Dolittle was.

The One and Only Ivan offers a heartfelt and plentiful family viewing experience, even if the substance isn’t as deep as it could be, and its overwhelming simplicity occasionally threatens to undo its earnest approach to its storytelling.

Want to decide what the movie’s like for yourself?
Check out The One and Only Ivan streaming links
via