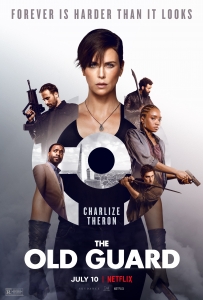 BASICALLY…: A covert group of immortal mercenaries, led by Andy (Theron), must fight to keep their identities a secret when they are suddenly exposed to the world…

As we wait patiently for the next batch of Marvel and DC movies – which has become a slightly longer wait thanks to COVID-19 – Netflix presents a new team of comic-book heroes to root for. But how do they measure up to the standards set by those superhero giants?

Based on the ongoing comic series by Leandro Fernández and Greg Rucka (the latter of whom also contributed the screenplay here), The Old Guard comes with a lot of strong talent involved; Charlize Theron both produces and headlines it, the supporting cast is a fine ensemble of character actors, and the director is Gina Prince-Bythewood who has had critical appraisal with films like Love & Basketball and Beyond The Lights, so one expects a certain level of sophistication with that kind of talent involved.

The good news is that the film largely succeeds in being a fun, captivating and engrossing action film, although it isn’t without the odd conventional cliché that ever so slightly prevents it from being the truly great film it could have been.

Our heroes are a small group of mercenaries, comprised of Andy (Theron), Booker (Matthias Schoenaerts) and romantic couple Joe (Marwan Kenzari) and Nicky (Lica Marinelli). The reason they’re so good at what they do? They can’t die; they are a group of immortals who have lived for centuries and have used their regenerative healing abilities to help people all around the world. However, their power is soon exposed by former CIA operative Copley (Chiwetel Ejiofor), and now they must try harder than ever from letting Copley and evil pharmaceutical CEO Merrick (Harry Melling) from experimenting on them and harnessing their power. Coinciding with all of this is the arrival of a new immortal: young soldier Nile (KiKi Layne) who has just discovered her remarkable immortality, and who must now be shown how to live her new life in the shadows.

For a person who hasn’t directed action before, Prince-Bythewood is a natural at it; her action sequences are tightly shot by duo DPs Tami Reiker and Barry Ackroyd, they’re violent without being too gratuitous, and the fight choreography is highly impressive, with every punch, kick, body slam and gunshot being visible and felt throughout. It’s a fun and enjoyable ride, not just because the action is highly entertaining, but also because the script allows us enough time with these characters to understand the decisions they have made as well as why they’ve made them. The actors have easy chemistry with one another, as though they’ve legitimately known each other for centuries and held each other closely throughout that time, to a point where two of them have entered a (literal) eternal bond with each other, as spotlighted in an awesome declaration of love right in the face of danger. You really are rooting for these guys, and you do sympathise with their struggles because being immortal means an eternity of heartbreak and regret, as many of them have lost numerous loved ones over the years and have, understandably, shut themselves off from the rest of the world as a result.

Whenever the movie focuses on those kinds of character moments, as well as some highly innovative action sequences, the film really comes alive. However, it does fall into the trope trap more than once, with a number of genre conventions which aren’t given as much of a fresh perspective as the rest of the film; for one, this movie has an exceptionally weak villain, who’s this scrawny Mark Zuckerberg-type businessman whose very face could not scream the word “villain” any louder (part of me wonders if this is the type of performance that Jesse Eisenberg was going for in Batman v Superman: Dawn of Justice), except he’s not at all intimidating and far from a genuine threat to this team of immortal killers who could easily off this guy in seconds. There is also the inevitable moment that arrives in any of these mercenary group movies, where one of them turns out to be a traitor of some sort, which in fairness when it happens you do kind of understand their reasons for doing so, but still it’s a cliché that’s played straight and doesn’t come off as that big of a surprise, like most of the other tropes this movie sometimes likes to rely a little too much on.

Without getting into spoilers, the movie does set itself up for at least a second entry, and to be honest I would be more than okay seeing more of this world where immortals do exist. They certainly made a strong enough case for it with this first movie, which certainly has a few chinks in its armour, but by and large is a fun and entertaining flick with strong action sequences, likeable characters, and a very sophisticated approach to what could have otherwise been just another generic comic-book movie.

The Old Guard is a fun and visceral comic-book movie that boasts some well-done action sequences and characters you genuinely want to root for, although a few of the familiar genre conventions including a pretty weak villain prevent it from being better than it is.

Want to decide what the movie’s like for yourself?
Check out The Old Guard streaming links
via