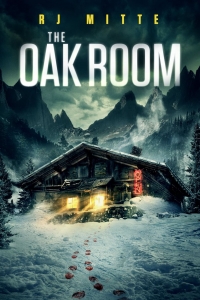 BASICALLY…: A mysterious drifter (Mitte) arrives at a blue-collar bar to settle his debts with the grizzled owner (Outerbridge)…

In another universe, The Oak Room would have been made and released right as Pulp Fiction was still at the height of its power in the cultural zeitgeist. Both movies share similar attributes, from a dialogue-heavy script to its somewhat non-linear storytelling, but director Cody Calahan’s perhaps goes a bit darker than the classic Tarantino movie, and even plays into its central mystery and singular snow-blanketed location which, ironically, closely emulates Tarantino’s later film The Hateful Eight.

However, in the current universe we’re all living in, The Oak Room is only now being made, having first found life in 2013 as a fringe play in its native Canada by Peter Genoway (who is also credited for the screenplay here) before being reformatted for the screen. While you can definitely see its theatrical roots all over the place – singular location, heavy emphasis on dialogue over visual methods, the fact that it’s all taking place over one night in almost real-time – this is an entertaining mystery thriller that neatly plays on your expectations and keeps you interested right up to the final shot.

The Canadian mood-piece primarily takes place in a small bar during a nightly snowstorm; the bartender, Paul (Peter Outerbridge), is about to close up for the night when in walks in Steve (Breaking Bad’s RJ Mitte), a young man who Paul has serious beef with for missing his father’s funeral and not paying his hefty debts. Steve soon offers to tell Paul a story in exchange for the return of his father’s ashes, which Paul has kept safe in a locked casket, and Paul reluctantly agrees to hear him out; in Steve’s story, we see a heated conversation take place at another bar called The Oak Room, where freezing out-of-towner Richard (Martin Roach) unintentionally rattles the cages of oddball bartender Michael (Ari Millen), which soon transpires into something else entirely, and gives us more of a hint as to why Steve is not only telling this seemingly unrelated story, but also why he’s even in Paul’s bar in the first place.

It’s very easy to tell that this was originally meant to be performed on the stage, and you’ll find yourself imagining several things surrounding its hypothetical production such as what the sets would be like when facing an audience, or how certain transitions to other moments in the past could work, and so on. However, director Calahan does an effective job of making his movie look and feel like something that comfortably belongs on the screen as much as it probably does on the stage. He manages to incorporate some moody shots that rely on the dimly-lit neon signs and ceiling lights of the bar we are predominantly in, as well as occasionally using some of the bright natural light seeping in through the windows to further create an ultimate sense of darkness looming over our characters. In addition to the dark cinematography, which also brings to mind some of the earlier works of the Coen Brothers like Blood Simple and Fargo, the editing also leaves you intentionally uncertain of peoples’ motivations, including whether or not everything they’re saying is genuine or just part of a larger fictional tale that they’re weaving. It is a taut, neatly composed thriller that is well crafted enough to justify its existence in motion picture form, even though you can always tell that this was first and foremost originally performed on the stage.

Genoway’s script easily carries the movie, filled with some strong, concerted dialogue that furthers the story without sounding too robotic or standard in its handling of certain exposition. You definitely get a feel for each individual character through this writing, as Genoway gives some of them a number of heavy monologues that deal with some seriously disturbing themes and scenarios (a particular creepy one involves a stillborn piglet which comes very close to flirting with horror movie territory), which all of the actors are more than able to inject some deep humanity into, even when they’re at their most sadistic. It’s an entertaining enough script that keeps you fully hooked on the central mystery and makes you want to see exactly how things will end for certain people, even though it doesn’t offer a number of straight answers, leaving it to the audience to put together the pieces themselves.

It’s a fun, pitch-dark thriller that is greatly entertaining, mainly because of this script and these actors who are doing such a good job bringing it to life, but also for the way it’s been assuredly adapted for the screen which, despite clearly showing its theatrical origins, proves that some stories like the multiple ones in The Oak Room can easily be told in more ways than one.

The Oak Room is an entertaining dark thriller which thrives on its punchy script and some strong performances, with capable direction that adapts the original play to a screen setting despite clearly showing its theatrical origins.

The Oak Room is now available to rent or buy on digital platforms, including Amazon Prime Video.