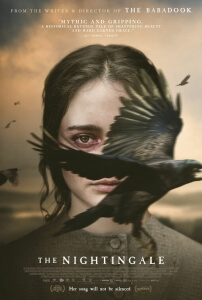 BASICALLY…: A young Irish convict (Franciosi) travels across the wilderness to get revenge for the murder of her husband and baby…

This review is of the cut shown at the Sundance Film Festival London in June 2019 – there currently isn’t a UK release date listed for this film yet, but you can expect a second review whenever it does make it to cinemas over here.

Five years after making a splash with 2014’s breakout horror hit The Babadook, Jennifer Kent is back with a follow-up that’s somehow more horrifying and disturbing than that film… and it’s not even a horror movie.

Opting instead for a gothic revenge thriller set in 19th century Tasmania, Kent still doesn’t let that stop her from creating a story so filled with unsettling imagery and a truly stomach-turning bleakness to this world that it honestly leaves you feeling more uneasy than most horror films that have come out between The Babadook and now The Nighingale, which will surely chill you to the bone and leave you wanting a hell of a lot more from an increasingly versatile filmmaker.

As mentioned, the film is set sometime in the early 1800s, somewhere on the outskirts of the Tasmania wilderness, where young Irish convict Claire (Aisling Franciosi) lives with her kindly husband (Michael Sheasby) and their infant child. However, Claire is under the cruel grasp of her abusive handler, British army officer Hawkins (Sam Claflin) who sees Claire as his property with which he can do whatever he likes after ensuring her freedom from incarceration. One night, just before he heads off to take up a new post, Hawkins and his men brutally attack Claire and mercilessly kill both her husband and child; driven by a burning rage to go after Hawkins and give him and his men exactly what’s coming to them, Claire is forced to hire a tracker or else risk getting lost in the wilderness. She quickly selects Billy (Baykali Ganambarr), a young Aboriginal man coming to grips with his own trauma against the invading white colonists, to lead her to her attackers, and so begins an intense and extremely dangerous journey for the two of them.

One of the main themes of the movie is the nature of anger, and how it is an emotion that can compel even the most rational people to commit some of the scariest and most barbaric acts out there. Anger is what drives Claire throughout her journey, after she’s been subject to unspeakable traumas with nobody to rely on for help or comfort; anger is what defines the monstrous Hawkins, who have a very abrasive and entitled personality that sees him committing more and more evil acts as the movie goes on, and anger is what even poor Billy, who’s had a life of pure oppression from the people who encroached his and his people’s territory, is struggling to not let get out of control, because he lives in a world where he could be killed just for the colour of his skin. The film’s true horror comes from the sheer ferocity of these characters’ attitudes towards their actions; you can feel every frustrated scream as Claire bashes in the head of one of her attackers, while Hawkins’ constant sneering and outbursts make his own crimes, from endless rape to child murder, all the more reprehensible when you see how petulantly he acts as he does them. Kent lets this theme play just as big a role in the movie as her characters, giving us enough time to familiarise ourselves with how much it can change a person to a point to where they became barely recognisable underneath all their rage, and that makes things all the more scarier when we know that all of these characters are in some way becoming a slave to their own outbursts which cause them to do some truly unimaginable things.

It is expertly made, with Kent framing the unsettling events within a boxed-in Academy 4:3 aspect ratio that lets the bleak, surreal cinematography feel all the more claustrophobic. It is also exceptionally acted, with lead actress Aisling Franciosci delivering an especially fierce performance that requires her to go to some seriously dark places in order to get anywhere near the levels of emotions her character is clearly going through, while Sam Claflin is on top menacing form as this absolutely irredeemable monster who you so desperately want to see die a slow, horrible death by the end. However, its greatest accomplishment comes from how unforgivingly grim and bleak it is; this is a revenge thriller set in a world where every single person the protagonists come across could kill or sexually assault them at any given moment, and there are times when you honestly think the movie could simply be cut short by a murderous stranger who just happens upon their path, because let’s face it, it’s not like it’s outside the realm of possibility in this situation. The constantly dour tone may prove to be too off-putting for some, and for others it might numb some of the impact from some very unnerving acts of violence later on in the film, but it’s kept consistently entertaining because the quality of filmmaking is so good and the acting is so strong that you’re hooked on this story and on whether or not these characters will get the revenge that they so deserve.

Currently, it doesn’t seem that this movie has a set release date in the UK yet, despite strong reviews upon its debut at last year’s Venice Film Festival (it screened at Sundance Film Festival London because Kent originally debuted The Babadook at Sundance back in 2014), but when it does eventually secure a launch then I will be watching where it takes Kent next, as it can only go even further up from here.

The Nightingale is a disturbing and bleak revenge thriller from writer-director Jennifer Kent, who somehow manages to make her second movie seem even more terrifying and unnerving than her previous film The Babadook with frightful themes and some claustrophobic cinematography.