The Night (Review) – Atmospheric, But With Some Reservations 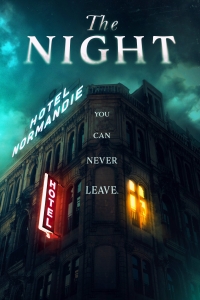 BASICALLY…: A couple of parents (Hosseini and Noor) spend a night in a mysterious hotel where are forced to confront their biggest fears…

Director and co-writer Kourosh Ahari’s The Night is culturally significant, in the sense that it’s the first Iranian-American production to screen in Iran following the country’s revolution, having been shot on location in Los Angeles with a mostly Iranian crew from a script that largely spoken in Farsi.

While that is certainly an impressive feat, the film itself is a bit of a mixed bag. Opting for Kubrickian atmosphere and suspense with its ever-cryptic narrative, but amounting to nothing more than an average supernatural thriller (with very questionable morals) once you strip it of all its bare parts, The Night is almost guaranteed to equally intrigue and infuriate audiences hoping for a straightforward ghost story.

We are quickly introduced to our main couple, Babak (Shahab Hosseini) and Neda (Niousha Noor), at a dinner party with friends, while their infant daughter Shabnam is asleep in the other room. When it’s time to head home, Babak – having downed one too many shots – gets them lost when he stubbornly gets behind the wheel. The couple decide to check into a hotel for the night, and settle on the nearby Hotel Normandie which appears to be empty aside from the receptionist (George Maguire), but as they try to get some much-needed sleep they are suddenly disturbed by a number of ghostly visions and visitors, which won’t go away until both Babak and Neda confess their biggest secrets to each other.

When you break it down, The Night is one of those haunted hotel movies where the ghosts are just being dicks to these people who just want to get a good night’s rest. Seriously, how would you feel if you’re checking in somewhere after a hectic night out, and are hoping to get a few hours’ kip in a comfy bed, only for there to be spirits of young boys and nosy police officers banging on your door and ceiling all throughout the night? Unless constant disturbance is your white noise machine, I imagine you’d be just as frustrated and wound up as our main characters are, and to Ahari’s credit he does manage to create a sharp feeling of annoyance as more and more ghostly apparitions cause both of them – one of whom is not only drunk, but fighting off a toothache – to keep getting up at ungodly times in the early morning. You feel just as disoriented as they are, especially when misleading visions cause them to drop their guard whenever they’re placed in charge of their baby, and whenever Ahari finally dives head-first into surreal territory where it’s hard to tell what’s real and what isn’t.

However, it’s also one of those films which holds its cards way too close to its chest until it reveals its far too late in the game. For the first two acts, it’s largely an onslaught of strange hauntings happening to characters who aren’t given a lot of personality but enough to at least get you to sympathise with them, but when more is revealed as to why they might be being haunted at all, especially Nera, suddenly it hints at a mindset which feels very awkward and somewhat judgemental, and it starts treating this person like they deserve the worst even though what she did is really no cause for alarm. Regardless of how you feel about this reveal, and the uncomfortable way that the movie itself treats it, the point is that such a thing is only uncovered way beyond the moment when we really should have been given this pertinent information ages ago, so that we can perhaps better understand these people and why they might be susceptible to such a vast and consistent haunting.

Instead, Ahari focuses on delivering a bunch of atmospheric, but ultimately fruitless, scares which are really no different than any other movie set in a haunted building. The Shining is clearly a reference point, as it heavily borrows certain camera shots and entire set-ups from that movie (not to mention the fact that it’s set in an eerie hotel where ghosts just wander about freely), while other shots only mildly deliver the background chills they intend, ultimately leading to a conclusion that will only leave you scratching your head instead of satisfied with what it has to say about certain things.

Even though it’s a film that by no means has any intention of sticking to any kind of reality, The Night does leave you somewhat restless with everything that it doesn’t do which it so easily could have done in a more unique way. Atmospheric cinematography and a frustrated mood can result in some interesting shots, but there ultimately needed to be more for this to be a haunted hotel movie that sticks out from the rest.

The Night is a mildly intriguing but equally frustrating haunted hotel thriller which establishes a discombobulating mood and some atmospheric cinematography, but they ultimately prove fruitless as it plays its cryptic cards far too close until it’s too late for you to really care or know about the characters, and its heavily borrowed scares from similar movies leave it with little identity of its own.

The Night is now available to rent or buy on digital platforms, including Amazon Prime Video.