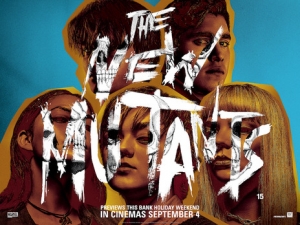 BASICALLY…: A group of young superpowered teens are holed up in a secret facility, which they must escape from before danger arrives…

No movie this decade – nay, this century – has perhaps had less luck than The New Mutants. Originally developed as a spin-off series for 20th Century Fox’s X-Men franchise, the film was in trouble almost from the very start, with director Josh Boone experiencing difficulties with on-set rewriting and a studio that was reluctant to fully give in to his full-blown horror movie vision. From then on, things only got worse for the movie; it went through delay after delay after delay on the release calendar, to make time for reshoots designed to reshape the movie into the horror film promised in the attention-grabbing first trailer (put together after the success of It), only for the reshoots to never happen due to 20th Century Fox’s acquisition by Disney. Even after all of that, and after Boone was given final cut privileges, it still couldn’t catch a break, with the COVID-19 pandemic forcing its then-solid April 2020 release to be pushed back yet again, to the dead end of summer where a large percentage of cinemas still aren’t open, and to add insult to injury a giant hurricane arrived in America at the same time, as though God himself is trying to stop this movie from ever getting released.

And yet, the unluckiest thing of all is that everything I just described is in fact a lot more interesting than the movie itself.

No doubt put together with good intentions by its filmmakers, The New Mutants ultimately suffers from a concerning lack of ambition, as though it seems thoroughly aware that nothing is ever going to come from it, especially now that Disney owns the rights to the X-Men. Instead, it settles for a generic and forgettable format where the scares are scarce, and the superheroics are underwhelming in comparison to what we’ve already seen in this now-defunct universe.

It is largely set in a near-empty hospital protected by a force-field, where five teen mutants – Dani (Blu Hunt), Rahne (Maisie Williams), Illyana (Anya Taylor-Joy), Sam (Charlie Heaton) and Bobby (Henry Zaga) – are being held under the pretence of controlling their newfound powers, whilst they are watched and observed by Dr. Reyes (Alice Braga). Of course, it isn’t long before they discover the real reasons why they are being contained, and as they each begin to experience some disturbing manifestations of their biggest fears, the five teenagers must band together to escape Reyes’ grasp on each of them.

Part of me feels that the movie could have significantly benefited from those reshoots, because then not only would it have actually delivered on what was promised in that intriguing first trailer (a number of shots from which, incidentally, are not in the actual film), but it might have also given itself a much-needed jolt of energy. The film we get is low-key to a fault, mostly confined to this one location which quickly wears out its effect, and you can feel the filmmakers struggling to find new ways to make this cliched abandoned hospital set-up more intriguing (a pool will just suddenly exist out of nowhere for a key scene, as will an attic that we never go back to despite the set-up). The low ambition is matched by the oddly dim cinematography, clearly done to give scenes a spooky vibe but never achieves that effect because the film just isn’t scary, nor is it atmospheric enough to warrant such moody lighting, which becomes frustrating when it’s hard to see during the film’s few action scenes.

Luckily, the low energy doesn’t stretch to the actors, as you can tell that they are at least trying to make something out of the material. Anya Taylor-Joy is having the most fun as the standoffish Illyana, even getting to play around with a dragon sock puppet named Lockheed, while Maisie Williams and newcomer Blu Hunt share some sweet chemistry in the film’s romantic sub-plot. The weaker links of the main five are Charlie Heaton and Henry Zaga, who have very little character to work with and, in Heaton’s case, adopt a phoney Southern accent which sounds more like Yosemite Sam half the time than anything else. Even they, though, are making the most of an otherwise thin script, which doesn’t dive that deep into these characters, nor does it offer an exciting enough reason for you to keep watching when there are so many other movies like it – even in this series – that you could be watching instead.

The film’s climax is already being written off by a lot of people as being wildly out-of-place compared to the rest of the film, with its heavy use of CG effects and a sudden boost of standard superhero moments, and that’s before we even get to what exactly it is that they’re fighting against. It never gets as bad as Josh Trank’s Fantastic Four (another Fox/Marvel property that’s mercifully being rebooted by Disney), but this climax does little to save the mediocrity that came before it, nor does it get you fully excited for sequels which will surely never happen now.

When you look at all that it’s been through, it stings just a little bit more that The New Mutants just isn’t very good, but perhaps it’s for the best, because it marks the end of the X-Men movie universe as we know it, and after both Apocalypse and Dark Phoenix fared poorly, it couldn’t have come any sooner. Even so, for this once-glorious franchise to end on a disappointing thud before it gets given the inevitable MCU treatment, it’s a real bummer.

The New Mutants finally lands with a disappointing thud, lacking the energy and ambition needed to deliver on its promises of a scarier entry into the now-defunct X-Men franchise, and despite strong efforts from the cast it sadly doesn’t get nearly as fascinating or even interesting as its much-documented production woes.

Want to decide what the movie’s like for yourself?
Check out The New Mutants showtimes in London
via