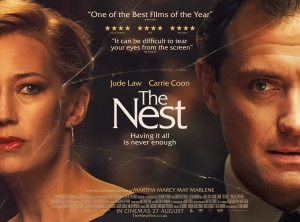 BASICALLY…: An English businessman (Law) relocates his family from New York to the English countryside, where tensions begin to boil over…

Sean Durkin can be described as an anti-horror filmmaker, in the sense that his work has layers upon layers of horror elements, but they are utilised not to give the audience any kind of cheap jump-scare, but to suck them in to the characters’ incredibly fragile state of mind as they experience very normal events through a sinister looking glass.

His debut feature, Martha Marcy May Marlene, took the classic horror trope of nefarious cults stalking an escaped member, and turned it into a sensitive portrayal of paranoia that its lead, then-breakout Elizabeth Olsen, was experiencing. Almost ten years later, Durkin’s follow-up film The Nest also takes a very familiar horror template – that of the family moving into a haunted house – and, once again, goes completely in the opposite direction. Although everything from the mood to the atmosphere to the overall filmmaking may indicate to the naked eye that there is more to this gothic-looking house than the characters may at first realise, the truth is that it is a mere backdrop for a much more sombre and surprisingly intense family drama that trumps the notion of a spooky mansion.

Set in the 1980s, ambitious trader Rory (Jude Law) lives with his American wife Allison (Carrie Coon) and their kids Sam (Oona Roche) and Benjamin (Charlie Shotwell) in the New York suburbs. Feeling that he has exhausted all of his potential in the States, Rory uproots his family to a large stately Elizabethan manor in the English countryside and returns to work in London’s financial district. However, cracks in the family start to show as Rory becomes more and more untrustworthy by the minute, with promises of enormous cash flows from potential business deals never amounting to anything, and a startling low amount of savings left in the bank. What’s more, the kids are struggling to adapt to their new surroundings, either being bullied at school or hanging out with local hoodlums, and Allison – a horse trainer – sees setback after setback with the building of her new stables and the taming of her sole stallion. Soon, the family becomes a shade of what it once was, and it’s all down to one man’s fragile ego which doesn’t care how many lives it must ruin until it is satisfied.

You’re probably thinking, “what’s any of this got to do with a haunted house?”, and you’d be right. While The Nest isn’t technically a haunted house movie, Durkin presents his film with the illusion that somewhere, in the background, there might actually be something supernatural going on – but it never fully addresses that, leaving the suspense to come from what we actually see in the foreground. However, the filmmaker doesn’t neglect his unsettling environments entirely; the house itself is shot like it’s the home from The Amityville Horror, with lots of long takes and super-slow zoom-ins plastered over the dark and moody cinematography, as well as the tightly-wound editing which creates an uneasy feeling in almost every corner of the building. There’s even some chilling imagery that one might actually find in a straightforward horror, from an opened locked door to a shot that may give any horse-lovers out there nightmares for weeks.

But like Martha Marcy May Marlene before it, Durkin’s The Nest isn’t so much invested in the stuff one normally associates with horror, and instead digs deeper to the very foundations of the things that are supporting it, unearthing a very raw breakdown of family life by the insecurities blanketing it. Jude Law’s Rory is a man whose ambition is almost as big as his ego, so much so that he is willing to completely relocate his family – for the fourth time in ten years, as Allison points out – for an overseas opportunity that may or may not even be legitimate. Over the course of the film, his façade of being this wealthy, charming and sophisticated entrepreneur withers away to reveal a desperate, sad and frightfully arrogant individual who seems to care very little about how his family, even his children who he claims to love with all his heart, might be feeling about their new and unfamiliar environment. Law, in one of his finest performances in ages, excels at playing a man pretending to be someone else pretending to be something else, which has resulted in devious and – yes – horrifying consequences for his nearest and dearest, fronted by an equally-excellent Carrie Coon whose levels of passive-aggression towards her husband’s numerous false promises are an artform in and of themselves.

As you watch this family grow further and further apart, all within the confounds of this sinister and imposing manor that they’ve inexplicably begun occupying, Durkin’s ability to impose horror without actually making his film a horror is fully realised. The horror, as we come to realise, comes not from whatever may be lurking in the shadows, but from what is right there underneath the lit lamp; this cold, dark and often harsh slice of family life has been driven entirely by one man’s calculated decision to change everyone’s lives just to serve his own sense of purpose, and not only does it drive a wedge between every single member of the household but it might even impose several, possibly unfixable, counts of damage. Anyone who’s been stuck in a situation like this, where a major family uphaul like a big move threatens to fracture the stable dynamic that has held it together, will recognise features of what Durkin is going for here (the filmmaker himself has even stated that the film is inspired on his own experiences of moving from his native Canada to England during his childhood), and will surely feel aspects of terror for these characters going through similar ordeals.

If nothing else, The Nest confirms Sean Durkin as a bona fide anti-horror filmmaker who, when coupled with Martha Marcy May Marlene, takes traditional horror templates and completely turns them on their head in unexpectedly raw and real ways. The film is already a smart and neatly layered family drama, but the added effect of there possibly being a haunted house also in the mix makes for extremely uneasy and even unpredictable entertainment. Imagine, though, what he could do with an actual horror film.

The Nest is a smart and neatly layered family drama with strong hints of a non-traditional haunted house movie, eschewing the natural horror elements in favour of themes and characters that already give uneasy vibes. 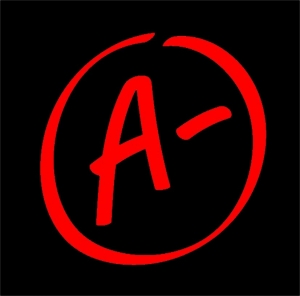 The Nest will be released in UK cinemas on Friday 27th August 2021 (date subject to change – check the official Film Distributors’ Association schedule for any further updates).