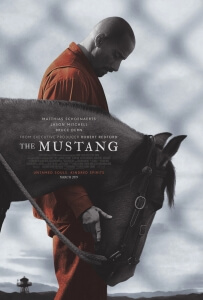 BASICALLY…: A prisoner (Schoenaerts) is assigned to a rehabilitation program where he is expected to train a wild horse…

When Clint Eastwood teamed up with Clyde the orangutan for Every Which Way But Loose, he said that his simian co-star was “one of the most natural actors I ever worked with,” and there is a truth to that when working with animals. When they’re properly trained, they can do just about anything – within reason, of course – just as naturally than any human actor in the same scene, if not more so. Sure, they’re still animals at the end of the day, but it’s an artform to have a dog, cat, horse etc not only behave accordingly with their human co-stars in front of a camera, but do so in a way that it doesn’t even feel like they’re “acting”.

Whoever trained the horse at the centre of The Mustang, the understated and moving prison drama from director Laure de Clermont-Tonnerre, did so in a way that makes this horse feel so authentic, so empathetic and also have great chemistry with the human that it’s acting opposite. It’s certainly the breakout star of the movie, which is already an emotional sit, especially for fans of slow-building dramas such as this.

The film is primarily set in a Nevada prison, where recently-transferred inmate Roman (Matthias Schoenaerts) – who’s doing time for assault – refuses to be reintegrated into society. A fiercely guarded individual who is prone to explosive anger when provoked, he believes that prison is the only place where he belongs, and doesn’t even want to reconnect with his pregnant daughter Martha (Gideon Adlon), who visits him regularly, albeit reluctantly. Roman is soon assigned to rancher Myles (Bruce Dern), who runs a rehabilitation program for inmates where they are expected to train wild mustangs so they may be sold at auctions; he is paired with a horse he soon names Marquis, and they develop a special bond which inspires Roman to emerge a little more out of his shell.

It certainly sounds like a plot from a late-90s/early-2000s Disney film, but this movie is anything but family-friendly; people are brutally killed in this prison, others assaulted (and not just humans, either), and some are even intimidated into smuggling drugs by threatening to do terrible things to their kids. There are entire scenes dedicated to the psychological mapping of the criminal mind, and the findings are just as bleak and quietly powerful; one such memorable scene set in an anger management class sees several inmates revealing that there were only mere seconds between thinking about doing the crime and then committing it, resulting in several years of imprisonment for them as a result. It’s a reasonably gritty prison movie, complete with decaying cell walls, blatant racism towards some of the African-American inmates, and an impending sense of doom and gloom reflected in every corridor, which the bleak sun-drenched cinematography captures in all its somewhat apocalyptic glory, and which director Laure de Clermont-Tonnerre – making her feature directorial debut after previously making a couple of shorts – doesn’t sugar-coat while avoiding going too overboard with the severity of prison life.

For all its bleakness, though, the script knows when to instil a sense of hope and optimism without getting too sentimental about it, and a lot of it comes from the central chemistry shared between man and horse. Clermont-Tonnerre is also an actress having appeared in films such as the Oscar-nominated The Diving Bell and the Butterfly, so she certainly knows a thing or two about getting a great performance out of actors, and here she not only gets an extremely compelling lead performance from Matthias Schoenaerts, but also from the horse that was trained for this particular, and vital, part in the film. Both of them work so well together that you honestly buy the mellow bond that they form in such a short amount of time (it takes place over the course of five weeks, leading up to the auction), and individually they have such screen presence that you could see either one of them carrying the film on their own. Schoenaerts is very intimidating in this film, with his thousand-yard stare speaking volumes for his character’s burning anger boiling up inside of him, and when he does flip his lid on more than one occasion it’s absolutely unnerving, because his performance is so gripping that you’re both intrigued but also terrified of him all at once. In terms of his human co-stars, Bruce Dern is great as always as the straightforward rancher who assigns Schoenaerts to his program, and Jason Mitchell is a little underused as a fellow inmate that the main character befriends but when he is on-screen he’s still his charismatic self which admittedly goes a long way.

The story is certainly predictable, as it does play out like every other “man-and-his-animal” plot you’ve seen before, but it’s all in the execution as the direction is slow-moving and exact, with the performances being especially gripping, including one of the breakout animal actors of the year in the titular mustang (it could almost go head-to-head with Goose the cat from Captain Marvel… almost). The end credits also reveal a deeper side to the story, as we see that it is based on a real-life prison rehabilitation program of similar practises, and that the inmates who are assigned to training wild horses have been less likely to reoffend when they are eventually released; it’s a nice note to end on, knowing that actual things like this exist in the real world, especially for horse lovers who will be just as enthralled with the creatures in this film as I was, and I’m not even that much of a horse person. I am, however, a big fan of the mustang in this film, and I hope that years from now Matthias Schoenaerts reminisces how, like Clint Eastwood did about Clyde the orangutan, that horse was a treasure to work with.

The Mustang overcomes its somewhat predictable story to be an emotionally powerful, sometimes bleak, prison drama with outstanding performances from Matthias Schoenaerts and the titular horse he acts opposite of.

Want to decide what the movie’s like for yourself?
Check out The Mustang showtimes in London
via