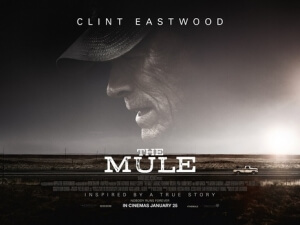 BASICALLY…: An aging war veteran (Eastwood) becomes a drug mule for the local cartel as a means to earn more money…

I like to think that The Mule only exists because even Clint Eastwood realised he screwed up with The 15:17 to Paris from earlier last year, and wanted to make something else to distract people from the fact that he made that utterly terrible movie. The evidence to support this is there in plain sight; Eastwood announced he was making the film in January (roughly around the time when The 15:17 to Paris debuted), and had the majority of his cast in place by the middle of the year, starting production in June before a hasty post-production phase in time for a late 2018 completion and release. With all of that in mind, you can’t convince me otherwise that Eastwood’s sole drive behind this film was to make people forget about the fact that he also released the worst movie of his career in the same year.

Luckily, The Mule is nowhere near as bad as The 15:17 to Paris – in fact, it’s goddamn masterpiece compared to his other 2018 film – but compared to some of the other work by the actor-turned-filmmaker over the years, this one is still a pretty noticeable downgrade.

Eastwood also stars in the film – the first time he’s done so for a film he’s directed since 2008’s Gran Torino – as Earl Stone, a 90-year-old horticulturist whose flower business has just gone bust, and whose family want nothing to do with him since he bailed on his daughter’s wedding some years ago. In need of money, Earl takes a job that requires him to simply drive to one destination and back with some cargo supplied by the shady guys in the tyre shop; later, he discovers that he has in fact become a drug mule for the local cartel, but is being paid a lot of money by them so he doesn’t really care all that much, and that’s even when DEA agent Colin Bates (Bradley Cooper, in a largely thankless role) is hot on his tail.

As talented a guy as Eastwood is, especially at both acting and filmmaking, you can tell that the last few years have seen him not especially be in his element, with other films of his like Sully, Jersey Boys and J. Edgar all feeling like they were made by someone who’s certainly starting to show his age, and not in a particularly good way. The Mule is more among the quality of those films, which aren’t as aggressively terrible as The 15:17 to Paris but are still nowhere near as Oscar-calibre as something like Unforgiven or Million Dollar Baby; it makes one a little nervous about the 88-year-old’s ability to keep making movies at his age, but even at that – and quality of the movie aside – you have to respect the fact that he’s still out there doing what he loves to do, when “most men his age are either dead or dying,” as Billy Crystal once crooned to him. Still, though, it’s clear that he’s starting to lose his way a little bit, and nowhere is that more the case than with The Mule, which definitely feels like it was a rushed product from its messy script by Nick Schenk (who also penned Eastwood’s Gran Torino) to the relatively unambitious filmmaking and editing that has gone into it.

There are long stretches of this movie where nothing is really happening, with Eastwood’s character going about his business with little to no conflict in scenes that could either be very easily cut or trimmed down to get it to a much shorter running time (it runs up to just under two hours, when it really should have been a 90-minute movie at the most). Some of those scenes feel like excuses for Eastwood to briefly reprise his racist character from Gran Torino, such as when he stops to help a black family on the side of the road and instinctively calls them “negroes” to their faces, and a completely pointless scene where he runs into a lesbian biker gang and it ends with him calling them “dykes” with a big old smile on his face. There are also not one but two instances where Eastwood is shown to have a threesome, one on his own dime with a couple of prostitutes, and the other as a gesture of goodwill from the cartel’s boss (Andy García), both of which again could be cut from this film and nothing that follows would be changed. The script also seems to have a limited amount of focus, as it will soon move from Eastwood being this happy-go-lucky nonagenarian who’s just simply doing his runs, to a self-reflecting arc where he has to very seriously reassess his relationship with his estranged family, including his ex-wife Dianne Wiest, to scenes of Bradley Cooper trying to come closer to nailing whoever it is that’s transporting so many kilos of drugs for this cartel. If this script had been given enough time to complete one or two more drafts, then it could have been a slightly more solid product; as it is, though, it’s kind of a mess.

However, unlike The 15:17 to Paris, at the very least this is a mess that is reasonably well acted. Eastwood is clearly having a blast in his first lead role in a number of years, in a different and slightly more peppy performance than we’re used to seeing him, and he makes the most of it; he has good scenes with both Dianne Wiest and Bradley Cooper, who are great actors themselves and also do what they can with a script that more often than not doesn’t give them a whole lot to work with. There are other actors who just kind of drift in and out of the picture, some of whom you’ll even forget they were part of the film at all, like Laurence Fishburne and Michael Peña as a couple of DEA agents working alongside Cooper, and Clifton Collins Jr. who suddenly takes over this cartel at one point and then almost never appears again in the film afterwards.

Again, a solid rewrite could have fixed all of this, but I guess that’s the price you pay when your previous movie bombed and you wanted to get back into people’s good books as quickly as possible,

The Mule is a minor step-up from Clint Eastwood’s previous film The 15:17 to Paris, but it’s still a bit of a mess that could have used more time to work on its script rather than go with the rushed draft they went with.