The Mitchells vs. The Machines (Review) – All Hail Lord And Miller! 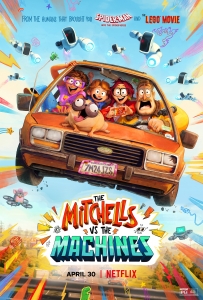 BASICALLY…: When a technological revolution befalls the planet, one family stands up to the uprising machines…

It shouldn’t come as a surprise at this point, but the dynamic duo of Phil Lord and Christopher Miller – who between them have overseen plenty of modern animated classics from The LEGO Movie to Spider-Man: Into The Spider-Verse as directors, writers and/or producers – may have just struck gold yet again with The Mitchells vs. The Machines.

Originally set for a theatrical release last year under the less-wordy title Connected, before Netflix acquired distribution rights from Sony, producers Lord and Miller’s latest encapsulates all the glorious humour, vivid visuals and touching heart of their previous projects, and with the addition of co-director and co-writer Michael Rianda (previously a writer and creative director on the hugely underrated TV show Gravity Falls – seriously, check it out on Disney+ via this link; you’ll be unearthing a real gem) there’s also a wonderful weirdness that’s fully embraced to often hilarious effect.

The Mitchells of the title are a small nuclear family living in Michigan; there’s father Rick (Danny McBride), mother Linda (Maya Rudolph), and their two kids Katie (Abbi Jacobson) and dinosaur-obsessed Aaron (Rianda), not to mention their cute pug dog Monchi (Doug the Pug – and yes, they really did get an actual dog to voice another dog). Katie is a budding filmmaker, and has just been accepted to a California film school, but Rick is fearful that his teenage daughter is only setting herself up for failure. In an attempt to reconnect with his family, who are otherwise glued to their phones and tablets like any other family, nature-loving Rick instinctively organises a family road trip across the country to drop Katie off at her new school – unfortunately, their trip coincides with a global tech uprising, led by a disgruntled Siri-like AI named PAL (Olivia Colman) that commands her army of robots to capture and store humanity in small pods while technology takes over the planet. Soon, the only humans remaining are the Mitchells, who must now come together as a family to save the world from its miserable fate.

From the very first studio logo, the visual style of The Mitchells vs. The Machines is dominant, a blend of 2D and 3D animation that feels like actual cartoon doodles come to life; on the CG main characters, their textures from beard hair to the smallest inflictions in their eyes heavily resemble add-ons in hand-drawn sketches, while several interludes heavily showcase eye-popping artwork that a kid would come up with in their little notebooks. It is a gorgeous mixture, with both CG and traditional elements standing out in a movie that is already highly energetic, and co-director Rianda, along with his grand army of animators, lend a sense of controlled chaos to some of the highly creative and very funny action set-pieces (particularly one set in a rundown mall, where an army of Furbies steal the entire sequence).

As with other Lord and Miller productions, the overall animation style is extremely kinetic and fast-paced which often threatens to become exhausting for some of the older, more impatient viewers, but to offset all of that, the script contains plenty of heart and fun, likeable characters who you can easily root for in this imaginative, often very funny story of technology vs. humanity. The Mitchells themselves are an enjoyable bunch, each with their own distinctive personalities and highly engaged voice actors – to see the likes of Danny McBride, Maya Rudolph, and Olivia Colman as the film’s villain enact some of their lines and actions in a recording booth would be a real treat – while the script devotes a lot of time to their dysfunctional relationships, which numerous family members can relate to in some capacity in today’s tech-driven society. It’s also a very heart-felt movie, with some scenes really reaching into the emotional turmoil of holding such a family together, leaving you both thankful for all of the sacrifices your parents, siblings, cousins etc have made for the people they love, as well as glad that there’s a film out there which says it’s okay to embrace what makes families the oddballs that they sometimes can be.

As for its overall stance on the dominance of technology in our lives – clearly a major theme throughout The Mitchells vs. The Machines, not just through the symbolic tech uprising but the frequent references to online meme culture and the notion of family dinners being interrupted by constant phone usage – the film makes several allusions as to how, while it perhaps isn’t a formidable idea to have modern gadgets completely substitute for good old-fashioned human contact, there are just as many benefits to it as there are setbacks. Of course, the Internet has greatly expanded in the 30-something years it’s been active, and it has allowed nearly everyone from budding filmmakers like Katie in this film or even film reviewers like myself to thrive and share content globally, but there comes with it a hefty responsibility to use it sparingly from games to social media (oddly, one of the few areas of modern technology that this film doesn’t get that much into), otherwise there’s a chance you’ll miss out on the unfiltered world right in front of your eyes. That’s more or less what this movie comes down on, in a message that appeals to both the tech-savvy and the technophobic, but also reminds people of the real things you can’t necessarily download onto your phone, especially family.

With all of its numerous attributes and very, very minor flaws (it perhaps could have been just a little shorter), The Mitchells vs. The Machines is further proof that Phil Lord and Christopher Miller are not to be messed with in the realm of animation. With the visual pazazz and emotional cores to match rivals like Pixar and Laika, the two producers are a pair of cartoon titans in their own league, and have helped champion (and shall continue to do so) other energetic storytellers that match their weirdness, humour, and most of all their love for the craft. Once again, they’ve struck gold.

The Mitchells vs. The Machines is a fun, visually dazzling and extremely funny family movie with gorgeously stylised animation and a strong emotional core with plenty of likeable characters and sweet moments that producers Phil Lord and Christopher Miller, along with co-director Michael Rianda, champion with an iron will.

The Mitchells vs. The Machines is now available on Netflix.