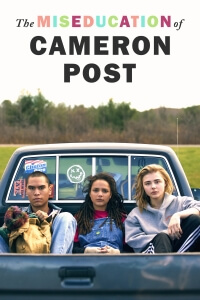 BASICALLY…: After she is caught in a suggestive affair with another girl, teenager Cameron Post (Moretz) is sent to a religious camp that practises conversion therapy…

This review is of the cut shown at the Sundance Film Festival London in June 2018 – the UK release date is currently listed for August 31st 2018. You can expect a second review of this film around its UK release.

Man, the 90s sucked. Sure, it was the decade I was born and grew up in, with tons of mindless cartoon entertainment to keep myself occupied to my parents’ relief, but looking back on it now, and especially when comparing it to today, it’s a miracle that we as a species even survived that decade. We were nowhere close to the kind of technology we now possess, with the Internet in its infancy and that dreaded dial-up tone whenever we used to connect, grunge fashion was everywhere with teenagers walking around like prototype millennials, and people were being killed in genocides everywhere from Rwanda to Columbine High School.

For the LGBT community, though, it must have been an ordeal and a half. With the AIDS epidemic of the 80s still fresh in people’s minds, rampant homophobia was widely accepted, and in a world without social media or any other type of platform to speak out on, young people with same-sex attractions found it far more difficult to be out and proud, especially when there were religious camps they could be sent to so they can be “cured” of their homosexuality, a practise that is still sadly carried out to this day.

This is what The Miseducation of Cameron Post tackles head-on, and finds a way to make you feel pissed off that gay conversion therapy is a thing, but at the same time somehow find a way to make light of such a rotten situation.

Set in 1993 (hence that 90s rant from earlier), teenager Cameron Post (Chloë Grace Moretz) is caught in a compromising position with another girl at their homecoming dance, and is forced by her conservative aunt and legal guardian (Kerry Butler) to attend God’s Promise, a Christian summer camp designed to cure young adults of their homosexuality. At first, Cameron begrudgingly sits in silence as the camp’s cold-hearted director Dr. Lydia Marsh (Jennifer Ehle doing her best Nurse Ratched impression) and her “ex-gay” brother Rick (John Gallagher Jr.) attempt to drill into her head how her attraction to girls is a sin – among many things, they equate it to cannibalism and drug addiction – but soon, she makes friends with some of the other young people at the camp, including a one-legged hippie who goes by the name Jane Fonda (Sasha Lane, last seen breaking through in Andrea Arnold’s road trip epic American Honey), and floppy-haired Native American Adam (Forrest Goodluck). Together, they all try and survive the makeshift prison that has been constructed for youths like them, who are unsure of themselves and forced to adopt a certain way of life by outside forces.

Throughout the film, you see the mental damage that is clearly being inflicted upon these young people, and how this camp is oppressing these youths so much that it is turning them into weirdly peppy wet blankets who convince themselves of attraction to the opposite sex. Cameron’s roommate, a short-haired girl named Erin (Emily Skeggs), is a particularly sad case to watch; this is someone we see in flashbacks being a tomboy who watches sports with her father, but thanks to the camp’s abhorrent brainwashing she has become a lame do-gooder who gleefully convinces herself of a crush on one of the boys at the camp. It’s incredibly unnerving to watch, as these teenagers are being taught to basically hate themselves, all under the pretence of it being a Christian doctrine when in reality it is about as far away from compassion for another person as you can get. However, the smart approach that director and co-writer Desiree Akhavan takes is to certainly show how rotten it all is, but still allows you enough room to just kind of laugh at the ridiculousness of it all. There are a lot of chuckles that her and Cecilia Frugiuele’s script direct towards the lameness of this camp’s perky attitudes, especially with Rick and his Ned Flanders-like happy-go-lucky personality, and also how these kids try and deflect the sinister anti-gay doctrine by just being their gay selves (albeit repressed), or in Erin’s case how they’ve just kind of accepted it. It’s very difficult to take a topic like gay conversion therapy and turn it into a feel-good movie with legitimately funny parts and some very uplifting moments of joy – a scene where Cameron initiates an impromptu sing-along to 4 Non Blondes’ What’s Up is a light relief – but somehow Akhaven managed to pull off what seemed to be an impossible task.

It isn’t, however, without a few noticeable slip-ups. The themes of this movie really do tend to overshadow the majority of the characters, most of whom aren’t given much time to be fleshed out and be more than just the thin descriptions they are given. Though the actors playing them are certainly solid, including Moretz who has yet to be truly awful in anything, there’s just not much to the parts they are playing; Moretz’s Cameron Post is merely the kind of the standard protagonist who’s there to just be the audience surrogate and not much else, while her friends aren’t given as much focus which is disappointing because the way they are set up, especially Lane’s Jane Fonda character, you kind of want to know more about them than the main character we’re meant to be following. Even the designated villains are just there to be the battle-axe figures you love to hate (despite the fact that Ehle does a great job at being loathsome), and out of them only Gallagher Jr.’s Rick gets any sense of humanity to him because there’s an underlying tragedy to him that speaks volumes. If the script had taken the time out to really flesh out its characters whilst simultaneously portraying a tough experience with light touches to it, this would have probably been a far greater movie.

As it is, The Miseducation of Cameron Post is certainly a good movie, one that will piss you off but also reaffirm your ability to love whoever it is you are, even when people are trying their best to tell you otherwise.

The Miseducation of Cameron Post takes a difficult topic like gay conversion therapy and shows its hardships while also being unafraid to laugh at it, though its themes do tend to overshadow some of its underwritten characters.